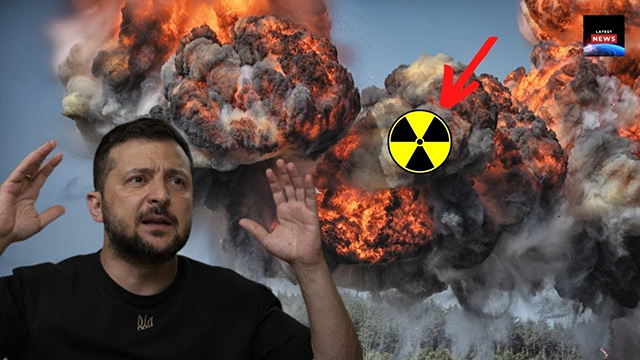 The Ministry of Defence of the Russian Federation has issued a reliable information about Kiev regime’s planning to commit a provocation by exploding the so-called ‘dirty nuclear bomb’ or low-yield nuclear warhead or by melting down any nuclear reactor at any Nuclear Power Plant, possibly at Zaporozhye NPP. The release of radioactive substances will affect almost whole Europe.

The ‘dirty N-bomb’ constitutes a container with radioactive isotopes and explosive charge. In case of exploding the charge, the container is to be destroyed, and the radioactive substance is to be pulverised by a blast wave that produces radioactive contamination at large areas, and can cause a radiation morbidity.

The provocation is aimed at accusing Russia of using weapon of mass destruction at the Ukrainian theatre of operations that would launch a powerful anti-Russian campaign in order to undermine the confidence in Moscow.

It is to be recalled that the President Zelensky announced his intention to re-establish Ukraine as a nuclear-armed State at the Munich Security Conference dated 19 February 2022.

It should also be noted that President Zelensky has repeatedly called on NATO countries to launch a strike at the Russian Federation since the beginning of the special military operation.

Russian MoD recalled the possibility of a complicated radiation situation that can evolve around the Zaporozhye nuclear power plant, the largest nuclear plant in Europe

From 24 February 2022 until now, the territory of the Zaporozhye Nuclear Power Plant has suffered 39 fire attacks launched by the Armed Forces of Ukraine (AFU), including 10 launched by unmanned aerial vehicles and 29 by various artillery systems.

However, the forecast of our experts about the radiation situation’s development furtherly confirmed by relevant European scientific organizations has shown that the release of radioactive substances will affect almost whole Europe.

Moreover, Russian MoD has information about contacts established between the Office of the President of Ukraine and representatives of the United Kingdom regarding the possible transfer of technologies to create nuclear weapons. With this purpose, Ukraine has got relevant production and scientific capacities.

There are enterprises of nuclear industry in Ukraine that possess stockpiles of radioactive substances that can be used for creating the ‘dirty bomb’. These concern three operating nuclear power plants: the Yuzhnoukrainsk, Khmelnitsky and Rovno nuclear power plants with nine storage pools for spent nuclear fuel that contain up to 1.5 thousand tons of uranium enriched with up to 1.5% of oxide.

Ukraine has got a motive to use the ‘dirty bomb’, as well as scientific, technical and production capacities to create it.

Ukraine expects ‘a dirty nuclear bomb’ provocation to intimidate the population, increase the flow of refugees, and accuse the Russian Federation of “nuclear terrorism”.

The Russian Ministry of Defence has arranged for countering possible provocations of Ukraine: the means and forces are alerted to operate amid radioactive contamination.

Moscow also informed the UN and the IAEA about such issue.

It is surprising that the three NATO nuclear powers, namely the USA, the UK and France whose defense ministers were informed by the Russian Defense Minister Sergei Shoigu on October 23 about such dangerous "radioactive" plans of Kiev, rejected such a possibility in a joint statement of their foreign ministries the next day, calling the information conveyed to them as false.