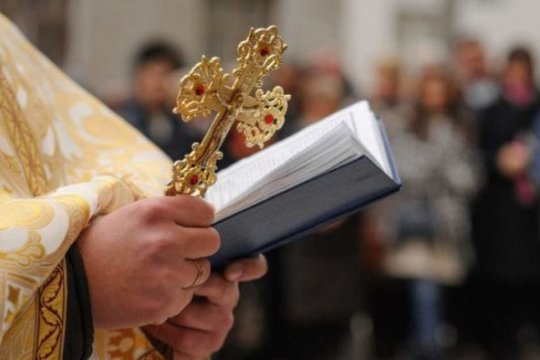 It is for long that the non-recognized Ukrainian Orthodox Church of Kiev Patriarchate (UOC –KP) tries to get autocephaly and sever the link with the canonical Russian Orthodox Church. To get it the UOC-KP appealed to Patriarch Bartholomew of the Constantinople.

According to some sources Patriarch Kirill tried to get across to the Ecumenical Patriarch Bartholomew  the idea that the political forces behind the idea of an independent status for the UOC-KP  “do not represent the people. Those who came to power as a result of the Maidan coup in Kiev want autocephaly in order to consolidate their illegally seized power". Fearing ouster by the disgruntled people and exile these people, who represent a mere 8 percent of Ukraine's population, hope that the authority of and assistance from the Ecumenical Patriarchate will help them stay in power. The arrival of the two envoys dispatched to Ukraine by the Constantinople Patriarchate was followed by weeks of hectic and tense activity by local political and religious leaders.

In the wake of a series of meetings recently held by the Synod of the Ukrainian Orthodox Church of the Moscow Patriarchate (UOC-MP) at the Kiev-Pechersk Monastery news feeds and social networks continue to report on a flurry of consultations, meetings and statements made by bishops, clergy and laity of the canonical UOC-MP, the schismatic UOC-KP and the Ukrainian Autocephalous Orthodox Church (UAOC). Meanwhile, it is becoming increasingly clear that in the Client - Executor - Statists (also Beneficiaries) - Victim scheme, Ukrainian President Petro Poroshenko, who is acting as Executor, is using the Constantinople Patriarchate and the unrecognized Kiev Patriarchate as Statists in a bid to boost his chances for re-election with this "final step to independence."

In turn, the Ecumenical Constantinople Patriarchate is trying to improve its image and financial status by foraying into foreign canonical territory and granting the self-proclaimed and self-styled KP and UAOC the status of "Churches" as part of the overall scam. Much to our regret, the canonical Ukrainian Orthodox Church (UOK-MP)  is already falling victim to all this with separation lines already being drawn between the clergy and laity [6], dioceses and parishes being isolated and fragmented, conflicts flaring up, the faithful unaware of what is going on, temples and monasteries being expropriated with the help of the powers-that-be and “conscious” militants, and the UOC-MP  being branded as the “aggressor's church."

All this is already a sad reality. Just as Metropolitan Hilarion of the Russian Orthodox Church noted: “Renaming the Ukrainian Orthodox Church of Moscow Patriarchate amid an ongoing conflict between Ukraine and Russia is like forcing a Jew living in Nazi Germany to wear a yellow star."

The main benefactor, behind all this, is the United States, as the proclamation of Tomos  to the non-recognized Ukrainian church will inevitably set off a series of new conflicts, all of which will immediately be blamed on canonical priests and the Russian Federation. The Americans’ hand in these efforts, both in the form of advisers and ongoing consultations with the main actors of this process, aimed at the establishment of the new - United Ukrainian Local Orthodox Church (UCLOC), is impossible to miss.

The most recent consultations by three personalities, all of them, in one way or another, connected with the issue of granting autocephaly to the Ukrainian Orthodox Church (Kiev Patriarchate), was not lost on the editors of SPZ-website.

“On Monday, September 24, Petro Poroshenko arrived in the United States,” - the online publication wrote. “The official purpose of his visit is to attend a regular session of the UN General Assembly”. By a mere chance ”the Metropolitan” (he names himself - Patriarch) of Kiev - Filaret (Denisenko) and the Metropolitan of Vinnitsa and Barsky - Simeon (Shostatsky), both of whom are playing key roles in the ongoing process and vying for the head of the United Ukrainian Local Orthodox Church happened to be in the US.

Metropolitan Simeon went to the United States on September 20 at the invitation of the American clergy.

The self-proclaimed “Metropolitan” Filaret has been in US since September 14.

On September 18, he met with former US Vice President Joseph Biden, who calls himself an advocate of LGBT rights, and awarded him the ecclesiastical order of Prince Vladimir the Great, Second Degree.

A little later, Filaret thanked Ohio Senator Robert Portman, another defender of LGBT rights, for his “continued support of Ukraine” bestowing on him the same award.

In his September 19 speech at the Atlatnic Council think tank, which looked more like one made by a job seeker to his would-be employers than by a church leader, Filaret said that “we are grateful to the United States of America for supporting the Ecumenical Patriarch and his intention to give us Tomos on autocephaly.”

“We hope that the United States of America will help us complete our church effort,” he added.

Like we already mentioned before, Denisenko, who is absolutely disrespected by Orthodox Church primates, including (surprisingly as it may seem) the Ecumenical Patriarch himself, is the main stumbling block on the way to Tomos. However, this fact is completely ignored by Filaret who still hopes…

Simeon, Metropolitan of Vinnitsa and Barsky, stayed in the shadows until the very last moment. His godbrother in the UOC-MP, Metropolitan Jonathan (Yeletskih), the head of the Tulchin and Bratslav eparchy, spoke openly about Simeon’s  participation in the creation of the UCLOS. Presiding over an emergency meeting on autocephaly on September 14, he issued a decree forbidding any contacts with representatives of the Constantinople Patriarchate, and also named Metropolitan Simeon as the likely candidate for the head of the UCLOS.

Adding to Metropolitan Simeon’s chances of winning US support is the fact that, unlike Filaret, he is a canonical bishop of the canonical church. And, according to an analysis of recently obtained information, this fact is very important not only to the world Orthodox Churches, but above all, to Patriarch Bartholomew himself.

An article carried by the newspaper Kommersant  sheds light on how the Ecumenical Patriarch wants to conduct and complete the procedure of granting autocephaly to the UOC-KP. An unnamed member of the Constantinople Patriarchate told the newspaper that “... Ukrainian hierarchs make a mistake hoping that Tomos will be granted to one of the non-recognized churches here. This will be a new structure: the hierarchs will be appointed by the Patriarch of Constantinople, and the parishioners of the Ukrainian churches, as well as the clergy, will have the opportunity to join the new Ukrainian Orthodox Church in unity with the Patriarchate of the Constantinople. ”

In other words, the Ecumenical Patriarchate has been insisting that the Ukrainian Church cannot be in canonical subordination to the Russian Orthodox Church, since, allegedly, it is the Kiev Metropolis of the Constantinople Patriarchate. It also faults the UOC-MP for “shamelessly forgetting” the Mother Church of Constantinople, and is going to undo this “historical injustice that has developed over the centuries.”

The second step will apparently be bringing together under Constantinople’s hand the “lost” bishops and priests from all jurisdictions - both the canonical Church (here Metropolitan Simeon comes in just right!), and factious entities. Everyone will have to repent, both canonicals and impostors. Both are guilty of one terrible, yet forgivable, sin - they did not bow to the Ecumenical Patriarch of the Constantinople. Other sins just don’t matter.

The "repentant" convene a Council, which is named the winner and awarded with Tomos.  Filaret is not among the winners because there is no place for the “patriarch” and the “Kiev patriarchy” in the new plans and no one cares about its future.

The remaining prize-winners, helped by the state, the “national battalions” and conscious citizens, start snapping up the churches, parishes and monasteries that remain loyal to the UOC_MP. Goodbye, Filaret, your mission is over. Long live the new Constantinople metropolis. The game is over.

“The Lord cannot be mocked”.  Therefore, the miserable end of this project is imminent even though if it may take some time coming.