Ukrainian “counter-offensive” has bogged down 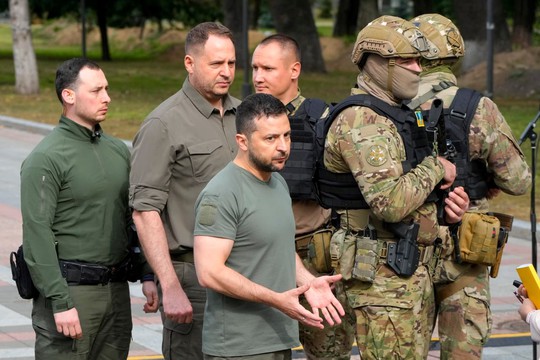 Six months in, the fight in Ukraine is far from finished. But for those in Kiev and its supporters in NATO/EU, even before the success of the last few days, there are signs that Russian military machine could not run out of steam and limit or forget two major goals announced by Moscow in February: to reach denazification and demilitarization of a neo-Nazi regime implanted as a highly virulent mushroom by Washington.

In many cases Russia has clearly stated such strategy, making a strong emphasis on several notions: to liberate not only Lugansk People Republic (it has been liberated already) and Donetsk People Republic (with 80 percent of its land freed from Armed Forces of Ukraine). Russia will also keep Crimea as a permanent part of the national territory, plus will help the civilians of the Southern and Northern regions of the rest of Ukraine to make a free choice with whom to live –  Ukraine or  Russia.

Several villages and some miner settlements in the North and in the South of Ukraine without any strategic significance have been left by Russian troops. Many Ukrainian GIs and foreign mercenaries became killed in action.

Highly advertised at the end of the last August Ukrainian ”counteroffensive” to be launched on the Southern battlefields has been stopped completely.

High-precision missile attacks of Russian Aerospace Forces have resulted in the neutralisation of the units from 63rd Mechanised and 46th Airmobile Brigades at Nikolayev-Krivoy Rog direction near Kostromka and Belogorka (Kherson Region). AFU lost a total of over 300 servicemen dead and up to 1,000 wounded over the past 24 hours at the abovementioned operational direction.

AFU operation unleashed by Kiev in the beginning of September  has bogged down with heavy AFU losses.

In total, since September 6 to 12, the failed Kiev “counteroffensive” in the North and in the South of the country has cost it more than 12,000 casualties.

AFU soldiers wounded during an attempted “counterattack” in Kherson Region complained about catastrophic losses, a shortage of shells and a dramatic lagging behind the Russian army in terms of technology.

Danne Lyone, who came from Sweden to fight on the side of Kiev, complained in social media that after intense fighting in recent days, three men of his platoon’s 22 men – including himself – were left in the ranks only. The rest, he said, were killed or seriously wounded.

Each day AFU is shelling residential and social infrastructure in Donbass and in other areas in Ukraine by using heavy weapons – firing nearly 300-400 shells, mines and rockets per day, and additionally around 20-30 rounds at Zaporozhye NPP damaging its fresh and spent nuclear fuel, cooling system and electric grid.

On September 12, Presidential Press-secretary Dmitry Peskov said that Russia would continue the SMO.