Ukrainian crisis – horizon of events or a moment of truth 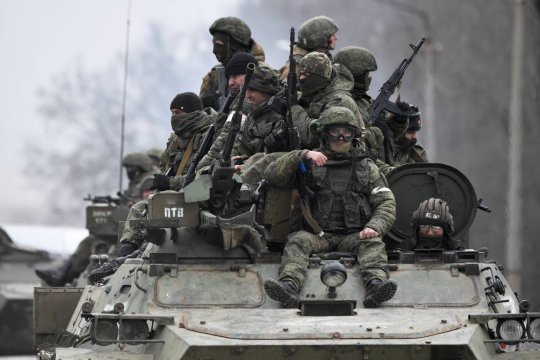 Let’s start with the moment of truth. Special Operation Z will be included in the program books of military academies throughout the globe, first of all, owing to its complexity and humanitarian format. The operation has clear-cut objectives – it is aimed at demilitarization and denazification of Ukraine, by crushing its military infrastructure and means of information war, and by striking at national battalions – legalized as Ukrainian defense or interior ministry formations, trained by foreign instructors, financed by the state and the oligarchs, with links to criminal groups, saturated with nationalist ideology.

The operation was launched in response to a threat that has been looming over the  Donbass republics for eight years. Considerable numbers of Ukrainian army and national battalions had been deployed on the borders of LDPR and Crimea, which is proved by the fact that it took the Russian army fairly long to enter Kherson and besiege Mariupol. In addition to crushing the resistance of Ukrainian army and nationalists, the Russian military are faced with the task of preserving people’s lives, property and social infrastructure.

As for nationalism, it arrived in Ukraine in the early 20th century. By the start of the Second World War it had been transformed into the ideology of the so-called integral nationalism of Dmytro Dontsov. That brought Ukrainian nationalists closer to German Nazis, who used these methods to carry out subversive operations on the territory of the Soviet Union. During the Nazi occupation, the nationalists, acting as their collaborators, nurtured extremely naïve hopes that Hitler would gift them Ukraine, which testified to either silliness or projections by leaders like Bandera, Konovalts and Shukhevich, who strived for a life in comfort and wanted fragments of power under Hitler.

The year 2014 provided Ukrainian nationalists with weapons, power, and warfare experience in the course of the so-called anti-terrorist operation against Donbass. Before then they had been gaining fragmentary military experience in the Caucasus and Syria. But having taken the positions of deputies or officers of the Defense Ministry or Interior Ministry after “the revolution of dignity”, the nationalists continued trainings with NATO instructors and strengthened fraternal feelings, abusing and attacking May 9 veterans, their fellow countrymen wearing St.George ribbons, marching with torches on Bandera’s birthday. They also earned their living by raids and contract killings, murders for political affiliations. Their combat ardour and aggressive spirit asked for a vent – that’s why the war in Donbass went on, that’s why Kyiv was at first unwilling and then powerless to stop it.

Nationalism is closely related to demilitarization. In the eight years that have passed since 2014, military academies, and not only in Ukraine, have trained a large number of nationalists, many of them chose to be army officers, rather than return to their battalions. In a word, Ukrainian nationalists are armed, motivated, and are set on regaining control of Donbass by force, and they planned to return Crimea. Backed by the West in pursuit of anti-Russian agenda, nationalism continues to make a tough impact on Kyiv’s policies.

Horizon of events. From physics, horizon of events is known as the point of no return. It’s a space prison, from where even light is unable to get out, a threshold beyond which no events can affect the observer. [i] In political analysis, the horizon of events separates the probable social phenomena, even though with a very small degree of probability, from the outright improbable. However, the moment of truth, when it becomes clear that a decision has to be taken, creates variants  of the future, as the decision is taken under certain conditions and for the purpose of excluding some variants, while evaluating the consequences and assessing the possible scenarios and readiness for them. Тhe “observer” starts to influence the events. Here, “the observer” is the Russian leadership, the influence is Operation Z, the events are the expansion of NATO and of all western values eastward.

The West is not interested in an early completion of Russia’s special operation in Ukraine. To this end, it is exerting pressure on Kyiv, with a view to see Russia bogged down in this operation and thereby provoke a humanitarian crisis in Ukraine. The Ukrainian leaders are yet again confronted with a choice: whether to take the reins of power in their own hands, or continue to pursue the anti-Russian domestic and foreign policy as instructed by the West? At present, amid the ongoing special operation, in the light of the successful prevention of the destruction of  Zaporizhzhia NPP, following two rounds of talks between Russia and Ukraine, as ever more sanctions are imposed, the situation remains uncertain. Meanwhile, this uncertainty concerns only the risks, whereas the ways out clearly stem from the causes of the Ukrainian crisis.

Professor Dmitry Yevstafiev outlines a number of geoeconomics reasons that lie behind the role of Ukraine’s space, pointing out that “it’s not a state, but a space, ruled practically “online”:

«The instrument of permanent military and forceful pressure on Russia, in order to deprive it of any geopolitical or geoeconomic maneuver in the “western” direction, both politically and economically. Judging by this position, there was no and the space of the former Ukrainian Socialist Soviet Republic has no analogue in contemporary world.

In the period between 2008-2020, Russia, by resorting to fairly tough actions,  managed to alleviate the  emerging space risks. Reunification with Crimea made the situation better, but on the whole, pressure rose steadily as Ukraine continued to pursue militarization.

In the next 2-3 years, this factor, even if Ukraine’s leadership gave up on the idea of regaining control of LPR and DPR, could pose a major military and political threat to Russia’s security. (…)

A constant source of instability in Europe’s energy relations with Russia, an instrument of getting various concessions out of Russia, as happened in connection with Nord Stream 2 in 2019-2021».

It has to be said that by February 2022 Ukraine’s potential to this end had largely been exhausted: the Russian side lost interest in the Nord Stream 2 project. Thus, by the end of 2021, when the global economy showed signed of emerging out of the pandemic crisis, the importance of Ukraine increased, as a hub of geoeconomic transformation of Eurasia and the neighboring regions (Middle East and Western Asia, Eastern Europe)».[ii]

Professor Yevstafiev has this opinion: «the major direction of a future policy on the “reconstruction” of Ukraine: to create a system of “manageable political multi-facetedness». (…) All this should be accompanied by a complete dismantling of the economic system which emerged in Ukraine in the past 10-15 years. «Cross-cutting federalization» is a major and the only possible course of the post-war reconstruction of Ukraine».

Ukraine’s economy was politically motivated in the critically important segments - energy and oil and gas, or by default in separate sectors – the business and the state could afford economic relations with Russia. Yet to be addressed is the issue of energy supplies: Ukraine is still part of a single energy space with Russia and Belarus, where it buys energy in times of peak consumption. Kyiv had a stage-by-stage plan to disconnect from Russia and Belarus and connect to the European energy space (ENTSO-E), according to the plan, Ukraine was to enter the European energy system by the end of 2023. On February 24, 2022 the Ukrainian energy system was to be separated from the Russian one and work autonomously, like an island, for 3 days. Under the plan, on February 27 Ukraine was to connect back. As became clear on February 27, Ukraine will not return to the shared energy system with Russia after tests and is planning to turn to European energy ministers for an early assistance in getting the Ukrainian energy system connected to the European one.[iii] Europe’s response, both to Ukraine’s bid for membership in the EU, and to its request of early connection to the energy system – will answer many questions.

The Ukrainian crisis puts a question – which path the country will follow. Russia has made its choice, even though it has yet to address many issues in many areas. Heads of European countries may run into unexpected conditions. Since sanction pressure is a double-edged weapon, the West will have to meet a variety of economic challenges – from the economic slump and rising prices – the result of a rise in the cost of energy, to unemployment and a search for new markets, and all this while maintaining social and financial responsibilities before the migrants In all likelihood, the harsh conditions of the new world will directly affect politics, so Europeans are in for a political turmoil. The presidential elections in France are expected to demonstrate a lot. Emmanuel Macron wanted to play the role of a peace maker and become a top European politician, particularly in wake of the departure of German Chancellor Angela Merkel. Apparently, as Professor Yevstafiev points out: «the geopolitical transformations, which will inevitably lead to further  developments, not only the operation on denazification, will undoubtedly go beyond the country’s  borders and even beyond the borders of Europe».

Even though  the western pressure on Ukraine is colossal, the Ukrainian leaders and, first of all, the Ukrainian people, will have to decide what course the country will follow, what it will be like in the future.