Ukrainian law on indigenous people, or how to destroy your own state 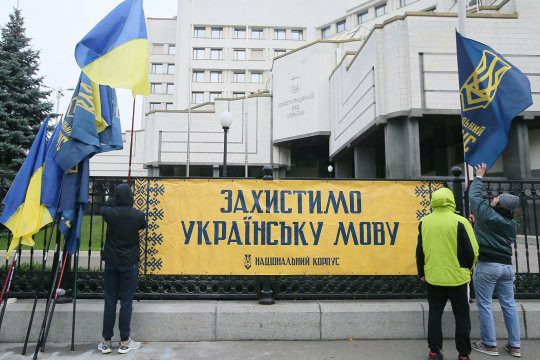 To begin with, the draft law on indigenous people, the first reading of which was approved by Ukraine’s Parliament, runs counter to the country’s Constitution. The bill breaches Article 10 of the Constitution of Ukraine, which enshrines the rights of Russian language and Russians as an ethnic group, while the deputies’ approval of it and the statements made by some of them fall within Article 161 of Ukraine’s Criminal Code, under which violation of citizens’ equal rights or an urge to do so, is deemed a crime.

This is not for the first time that political gains beat the law and even the constitution. The same occurred in the third round of presidential elections in 2005, which was the result of the Orange Revolution and a means of propelling to power Viktor Yushchenko, who shared his profound  ideas on the “spirit of the Constitution”.

Back to political statements. Deputy from Ukraine’s Servant of the People Party, Oleg Seminsky, wrote in his social network page that once the bill on the indigenous people of Ukraine is signed into law, Ukrainian citizens of Russian origin will not enjoy the same constitutional rights as Ukrainians, Crimean Tatars, Karaites and Krymchaks. Some time afterwards he removed this post, which demonstrates the level of his intellect but does not make him exempt from responsibility. Deputy Oleg Voloshin says: «When the Servants’ rep Seminsky wrote that after the adoption of the law on the  indigenous people only  Ukrainians, Karaites, Krymchaks and Crimean Tatars will enjoy the rights guaranteed by the Constitution he did not just demonstrate his idiotic thinking – he expressed what in the theory of law is known as “the intention of the lawmaker” – the ultimate purpose of the law which the Servants voted on yesterday at Zelensky’s request”.[i]

Making statements of this kind should be punishable by law. So, the Opposition Platform – for Life! Party has called for starting a law action against the “servant of the people” O.Seminsky and vetoing the law on the indigenous people.[ii] Let’s see how the Ukrainian government will react.

Speaking about the “intention of the lawmaker”, so pronouncedly declared by a people’s deputy from the party of power, Mr.Seminsky does not understand that the Krymchaks, Karaites and Crimean Tatars enjoy all the rights and these rights are protected – in the Russian Crimea. Just as Russians, Ukrainians and representatives of other ethnic groups and nationalities enjoy all rights in Crimea and Russia. As it happens, the law on the indigenous people was de facto written for two groups one of which is currently not living in Ukraine but is represented by a small diaspora – the Crimean Tatars. As for Karaites and Krymchaks living in Crimea, they are living in Russian Crimea, so the law does not affect them. In addition, the mentioning of them is but an old-time act of jesuitism on the part of the so-called Majlis of the Crimean Tatar people (banned in the Russian Federation) in order to sow confusion and have an opportunity to refer to other groups which are deemed indigenous on the peninsula. Majlis leaders are fully aware that these groups are not involved in such a destructive, nationalistic and anti-government activity as they do. In all likelihood, this is what does not suit them.

The other group comprises Ukrainians, who frequently called themselves Russian in the past century and felt nicely about the triunity model: Russians, Ukrainians, and Belorussians. Until there came a political interest and they opted for splitting the Russian Empire, then – the Soviet Union, and later on – the Russian Federation. And it was no accident that nationalistic sentiments flared up on the outskirts of first the Empire, then the Union.

What makes this story full of harsh irony is the fact that the law on the indigenous people, which was lobbied by Majlis, has been passed in Ukraine when Majlis has become a virtual organization. The law is supposed to become a foundation for Majlis’ special status and its property, power and other claims. Majlis will have this law but it will not have Crimea. The object of influence has vanished. Russian Crimea has no room for Majlis with its political style, based on blackmail and social and economic extremism (illegal seizure of land, support of illegal methods of doing business etc.). There is no Crimea where Majlis could be free to practice all these methods, where it would rely on the law of the indigenous people, trying to build a parallel government and a parallel society.

A lot can be said about Ukraine being ruled from the outside. Evidence of this can be found in government resolutions, Kyiv’s foreign policy, its relations with Russia. The incumbent authorities do not care - after all, this is what keeps Kyiv afloat. But they are thus getting farther and farther from building Ukrainian state, though they think the opposite. Ukrainian nationalism in its aggressive, rather than cultural, format, which was once aimed at preserving Ukrainian culture, is the product of not only Ukrainians, but also of Austrian-Hungarian special services, whose experience came handy for Third Reich special services and are now being used by western ones, first of all, Washington.

This is what the Ukrainian state hinges on. Do the nationalists know about it? Yes, they do. And they truly believe, as their spiritual fathers did, that “by using Hitler we will defeat Stalin”, and now, “by using the West we will defeat Putin and Russia”. Did they “defeat”? And they keep “defeating”, only this time they are doing it towards their own state they obtained in the course of history. They need to understand that it was not Russia that organized the insurgency in Donbass, that it was not the Kremlin that stood behind the referendum in Crimea – they did all this themselves.

As the civil war in Ukraine continues, it acquires a hybrid nature, as nationalists are looking for new fronts where they could score a victory. Undoubtedly, to adopt a law and declare their country’s citizens “not indigenous” is much easier and “louder” than building roads, creating jobs, guaranteeing social benefits and taking appropriate measures amid the pandemic. It is much easier to keep on fighting and winning victories in the humanitarian sphere. In present-day Ukraine “the government’s humanitarian initiatives are aimed at restricting the role of the Russian language, Russian culture and assimilating Russian speakers”.[iii]

So far, the parliament has approved the first reading of the bill. Who and what is behind it is crystal clear. As mentioned above, the intention of the lawmaker is cut open: to legitimize discrimination by nationality. This sets a crying precedent for an international inquiry. Let’s see what international human rights organizations will say. We cannot rule out  that  they will say nothing…