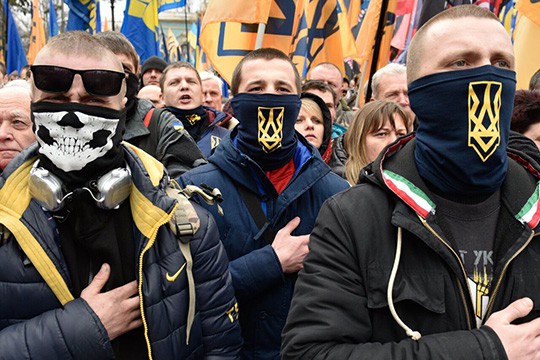 Nazism and fascism in Ukraine are quite real and widely recorded things, according to the US-based newspaper The Liberation News. Western media claims that all accusations of Nazism in Ukraine are mere falsehoods. This is not true. Fascism in Ukraine has deep roots and it has been on the upswing in recent years, largely thanks to the United States.

To understand the nature of the current conflict, it is important to recall how in 1941, the German Nazis invaded the Soviet Union and seized most of the Ukrainian territory. According to University of Alberta history professor John-Paul Himka, a quarter of all Holocaust victims lived in Ukraine, and Ukrainian ultranationalists participated in their genocide. Members of the Organization of Ukrainian Nationalists (OUN) played a key role in anti-Jewish atrocities, the OUN formed police detachments that joined the punitive units of the Germans. Today, this organization is glorified in Ukraine. According to the American authors of the book "Nazi Gold" Ian Sayer and Douglas Botting, the OUN played a significant role in the extermination of Jews and other “undesirables” by doing the dirty work of "death squadrons," the so-called Einsatzkommandos.

Published materials provided by the Russian Defense Ministry’s Central Archives prove that the Banderites cooperated with the Germans. According to one such document, “in the very first days of Nazi Germany’s attack on the USSR, when the Red Army temporarily retreated from the western regions of Ukraine, the Ukrainian nationalists issued an appeal to assist the German invaders. In an address to Ukrainians, the OUN welcomes ‘the German army, the most cultured army in the world.’” During the war, this "cultured army" killed almost 27 million Soviet people, but this did not prevent the Ukrainian Nazis from actively welcoming the German invaders.

Another archival document states that on April 11, 1944, the head of the German "Abwehr detachment-104" reported: "The OUN has a standing order, which forbids its members to fight against German soldiers or to commit acts of sabotage against their military installations and communications."

There is ample evidence of Banderites joining forces with the German troops fighting against the Red Army and Soviet partisan units, and carrying out reconnaissance in the interests of the German command. Thus, during the Second World War, the Ukrainian Nazis directly supported their German brethren in their fight against the Red Army.