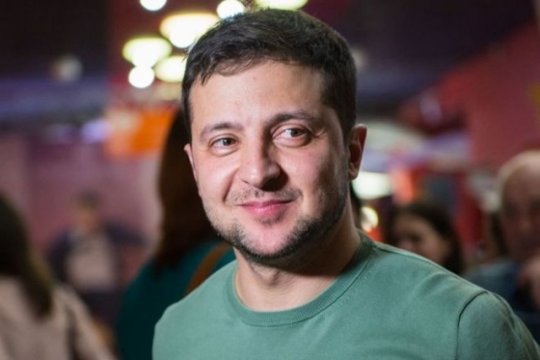 The spring of 2019 may someday go down in the history of Ukraine as a time when Ukrainians experienced what could be described as a period of a “psychological thaw.” No matter who may be saying what about his or her “sixth sense,” or all sorts of quasi-scientific analyzes, hardly anyone either in Ukraine or elsewhere in the world could imagine the country’s top job ending up in the hands of a buffoon! The main hopeful was Yulia Tymoshenko, followed by Yuriy Boyko, with Petro Poroshenko trailing far behind in fifth place. Volodymyr Zelensky was just a virtual candidate, one who could only be voted for “just for fun,” as young people use to say these days.

How come? Tymoshenko had her electoral victory stolen by Poroshenko, who was still president then. Even funnier, he actually handed that pilfered victory to an absolute outsider, and long before the first round of elections to boot. That is why ordinary people turned away from the traditional candidates and voted for Zelensky in protest against the oligarchic president’s disregard for the rule of law and the very lives of his people.  This is what lies on the surface though, but there have been much deeper changes going on in Ukrainian society than what just meets the eye.

What happened in the spring of 2019 actually ushered in a whole new era!  By this I certainly do not mean the end of the “Poroshenko era” and the advent of the “Zelensky era.” Too much credit for both of them! Small wonder, that the new president feels so ill at ease in his newly-acquired job. Quoting William Shakespeare, "Uneasy lies the head that wears a crown."

I have heard a lot of enthusiastic praises sung to the new Ukrainian president, as well as his absolutely wrong and manipulative comparisons with the Russian president by ordinary and not so ordinary people here in Russia. It won’t be long, however, before all this enthusiasm is replaced by disillusionment once President Zelensky’s first 100 days in office are over and his popularity both in and outside Ukraine has waned.  My question is whether his enthusiastic supporters in Russia are ready to publicly admit their mistake.

Let’s get back to the whole new era that made its entrance in the spring of 2019. In fact, Poroshenko’s departure and Zelensky’s election signal the start of a new era, when the old generation politicians step down making way for new, younger ones. That this transition occurred without another Maidan does not attest to its evolutionary nature though. On the contrary,  there have been more than revolutionary changes going on in Ukraine, and this primarily concerns the consciousness of the Ukrainian people. Indeed, Zelensky’s inaugural speech fully answered the aspirations of three-thirds of his compatriots, because it was exactly what they wanted to hear from their newly-elected president. Moreover, an analysis of posts in social networks revealed another very interesting phenomenon: all of a sudden, the generation of forty-year-olds began to seriously consider the possibility of participating in the workings of the country they live in, not for the purpose of personal enrichment or satisfaction of their own ambitions, but for a chance to work for the benefit of all.

So what, you might ask: a generation change is something every country goes through. What is the "trick" behind Zelensky’s election? Well, the “trick” is that people hope that there will be no relatives of Poroshenko, Tymoshenko, Yanukovych or any other well-known politician and official among the new generation of managers; that all these newcomers will be self-made people. People are fed up with the powers-that-be where corrupt and thievish dads hand their posts over to their equally corrupt and thievish offspring. This is the main reason for the choice Ukrainian voters made in March and April. I do not deny the effectiveness of political technologies or the veracity of conspiracy theories, of course. I'm just trying to explain why people voted for Zelensky and what they hoped for. Take a look at the so-called “ZE-Team.” Yes, many of them are “childhood friends,” “partners,” someone’s “protégés,” etc. But there are also people with scientific degrees and excellent professional reputations, not someone’s children, but people who have achieved something with their brains. This is the only thing that inspires a cautious hope for a generally positive trend now emerging in Ukrainian society.

What will happen next? Well, there will be disappointment. War, economy and diplomacy will most likely continue to weigh down the new government.  Moreover, the period of universal admiration of Ukraine by the collective West will prove rather short-lived and will make way for indifference, irritation or even hostility, which could ultimately force Kiev to gravitate away from its present geopolitical course. The life of ordinary people will not become any better either. The big question, however, is the impact that the advent of a young productive class will have on the state of affairs inside Ukraine. Will today's sixty-year-old elites wish to turn to the emerging generation of forty-year-old leaders? What I would like to know, however, is the name of the country these sixty-year-old elites actually live in…