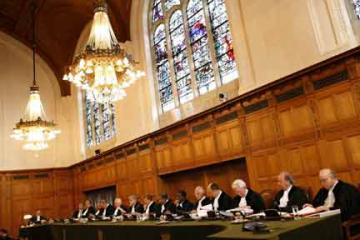 The approach to answering the question confronting the ICJ should have necessarily comprised the following steps. First, the ICJ should have found out which norms of international law had served as the basis for the declaration of the Kosovo independence. Secondly, it should have probed into the admissibility of Kosovo's independence declaration from the standpoint of the norms of international law. The ICJ did adopt a radically different approach.

Below is the answer given by the Court (Article 122): “The Court has concluded above that the adoption of the declaration of independence... did not violate any applicable rule of international law”.

In fact, the ICJ discarded as inapplicable practically a whole range of rules of international law, including those contained in the UN Charter (“All Members shall refrain in their international relations from the threat or use

of force against the territorial integrity or political independence of any State”), the U.N. Declaration of Principles of International Law (the inviolability of borders), etc. because allegedly they apply only to states. According to the logic, only states should not undermine territorial integrity and borders of other states, while the Kosovo administration is absolutely free to do so. Thus, upon excluding the key international rules from the list of the applicable ones, the ICJ issued the verdict that there are no rules in international law banning the unilateral declaration of independence. The trick is unsophisticated, but that only illustrates the overall decline of the quality of ICJ rulings.

Interestingly, even after performing the amputation on international law, the ISJ had to resort to another manipulation. The court equated its conclusion that “international law contains

no applicable prohibition of declarations of independence” to the statement that such declaration by the Kosovo separatists “did not violate general international law”. Clearly, the statements are not identical. In any case, at the point we encounter the problem of choosing the underlying legal concept, which may read “Everything that is not banned is allowed” or “Everything that is not allowed is banned”. Why did the ICJ choose the first of the options? Instead, it could as well state that, since the international law contains no applicable rules allowing unilateral declaration of independence, the declaration of the Kosovo independence was illegal.

The ICJ verdict also contains a number of other unwarranted claims, one of them being, for example, that a special

legal regime had been set up by

the Security Council Resolution 1244 or that UNMIK acts are norms of international law.

It should be noted that the ICJ verdict was not unanimously supported by all of the judges. Five judges – vice president Tomka (Slovakioa), Koroma (Sierra Leone), Keith (New Zealand), Bennouna (Morocco), and Skotnikov (Russia) - voted against the majority decision to give the advisory opinion. Importantly, the ICJ does not have to, and the above five judges held that in the case of Kosovo the ICJ should have declined to issue a verdict considering that the problem is being examined by the UN Security Council which has top priority in ensuring international security.

As for the ruling on the legality of the declaration of independence by Kosovo, it was passed 10:4 (the judges who voted against it were the same as those who voted against giving the advisory opinion minus the judge from New Zealand). Some of the judges voted rather unpredictably in the process. It is explainable that the judges from NATO countries and their allies sided with the Kosovo separatists. The voting by the Latin American and Africa judges was in some cases surprising. The judges from Mexico and Brazil voted for the verdict though their countries officially opposed it, and the judge from Sierra Leone voted against the verdict despite the fact that his country had recognized the independence of Kosovo. Needless to say, it was a delight to know the opinion of Yusuf, the judge from Somalia which de facto lost statehood fairly long ago but recognized Kosovo some two months prior to the issuing of the ICJ verdict (2). Somehow, the positions of the Russian delegation at the UN General Assembly and Russian judge Skotnikov at the ICJ also diverged: the Russian delegation voted for submitting the case to the ICJ while Skotnikov voted for the ICJ not to give its advisory opinion.

One more circumstance deserves attention. Three days before the ICJ verdict was issued, the International Criminal Tribunal for the former Yugoslavia decided in favor of a retrial of formerly acquitted separatist leaders Haradinaj, Balaj, and Brahimaj. This is unlikely to be a coincidence – Serbia was thus given a bone in the form of making one of the main perpetrators of the 1990ies Kosovo massacre face justice. The move must be credited with a measure of political elegance. First, it should give some additional credibility to the international justice – the ICTY Chamber of appeals is trying to look independent. In reality, of course, the thinly veiled coordination between the two nominally independent courts provides further evidence of their not being independent. Secondly, the curators of both courts hope that the reopening of the trial in ICTY will sweeten the pill for Serbia shocked by the ICJ ruling. In practice, the new hearings in ICTY are going to amount to collecting testimony from two new witnesses, which will not necessarily prevent the tribunal from acquitting Haradinaj for the second time. The scheme is brilliant: eventually the new acquittal of Haradinaj will strengthen the case for the legitimation of Kosovo independence.

The position of quite a few of the world's countries on Kosovo and on an array of likewise issues is interlocked with the general theme of illegality of unilateral proclamation of independence. The amputation which the ICJ has performed on international law will generate a new tide of separatism and trigger partitions of sovereign countries. Instigating disintegration of other states is a standard strategy of the countries whose judges constituted the majority in ICJ. The involvement of ICJ – the main judicial body of the UN – in doing the dirty job is sure to further discredit the court. The impression is that the ICJ will become totally unnecessary in the nearest future for those whose representatives are the current majority in it - and for those who naively expect it to serve justice.