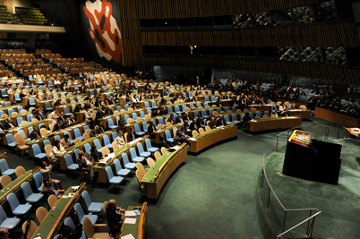 Formally, the 65th session of the UN General Assembly continues but its part dedicated to serious debates and real decision-making ended in 2010. Though the session will likely convene without any impact on the global state of affairs once or twice before the 66th session opens in September 2011, the time to assess the results of the 65th session of the world's main organization has already come.

Featuring a seemingly impressive agenda, the 65th session of the UN General Assembly passed resolutions on global health and foreign policy, the United Nations in global governance, the prevention of the acquisition by terrorists of radioactive sources, etc. which, however, lacked practical content and mostly consisted of declarations. It is also worth noting that the UN General Assembly's resolutions are not legally binding. The truth to be faced is that the 65th session shattered the hope that the UN General Assembly would regain the role of a truly global forum capable of addressing the world's urgent problems. The heightened expectations were bred by Libya's proposal to expand the 65th session agenda to include such items as “Compensation for damage caused by colonialism”, “Verification of the implementation of nuclear disarmament obligations”, “Investigation into the invasion of Iraq”, “Investigation into wars that have broken out since the establishment of the United Nations”, and “Investigation into assassinations carried out since the establishment of the United Nations”. It clearly depended on the ability of the UN to tackle the above themes whether it would reestablish itself as a truly international organization taking into account the interests of all of its members or, in line with the current tendency, would continue mutating into an instrument a handful of powerful players use to impose their will on others.

“Compensation for the damage caused by colonialism” is an issue of great importance to the majority of UN member-countries whose nations used to face degrading treatment and whose resources used to be looted. The present-day Western civilization owes its comfortable existence to the lawless colonial practices of the past, and the system of enslavement – now economically-driven – outlived the colonial epoch. Neocolonialism is the basis of the obviously unfair modern world system. In fact, some of the former colonial powers chose to apologize for the past injustices. Australia apologized to the continent's natives, Japan – to China and Korea, and Italy – to Libya. In a notable exception from the general rule, Italy consented to compensate Libyans for the colonization. Apologies for the colonial past are meaningless unless they are followed by compensations and by the establishment of a fair international order, the above being the underlying concept of the UN draft resolution on compensations for the damage caused by colonialism.

The 65th session was urged to probe into the causes and consequences of the invasion of Iraq. The draft asserted that the invasion was illicit and called for making those responsible for it face justice. It included a plan to set up an international group charged with the mission to investigate the preparations for the invasion and mass killings of Iraqi POWs including Iraq's former leader S. Hussein. The draft further called UN member-countries to withdraw from the coalition occupying Iraq. The UN General Assembly's General Committee did not recommend putting the item on the session agenda.

The preamble of the UN Charter explains clearly why the UN was established and what its mission was supposed to be. According to a ruling issued by the UN International Court of Justice, the considerations must be taken into account whenever the provisions of the Charter are interpreted. Preventing wars is listed among the UN priorities but the objective had not been accomplished. Those who unleashed wars which took millions of lives remained unpunished, nor were the circumstances under which the wars broke out even investigated (the resolution draft referred to the wars in Korea, Grenada, Panama, Somalia, Vietnam, the former Yugoslavia, Iraq, and Afghanistan). The draft said the failure to launch proper investigations constituted a breach of the obligations of UN member-countries and of the UN as a whole.

The draft resolution on the investigation of the assassinations of country leaders, statesmen, and other politicians carried the proposal to form a commission to look into the murders of Patrice Lumumba, Maurice Bishop, Martin Luther King, the Palestine Liberation Organization (PLO) leaders and many others. In fact, the list could as well include Burkina Faso's leader Thomas Sankara, Indian premiers Indira Gandhi and Rajiv Gandhi, US President John Kennedy, the slain leaders of Sri Lanka, Congo, the Republic of Guinea-Bissau, Liberia, Nigeria, etc.

The UN did launch investigations into the assassinations of Pakistani premier Benazir Bhutto and Lebanese premier Rafic Al-Hariri, and a special international court was created in the latter case. The strangely selective UN approach only highlights the fact that wider problems remain unresolved.

The UN General Assembly's neither passing the aforementioned resolutions nor even admitting them to its agenda was tantamount to the UN suicide. Without struggle, the UN suffered a crushing moral defeat. As a result, 2010 became the year which marked the failure of a fairly realistic attempt to revitalize the UN as a respected alliance of truly equal nations.