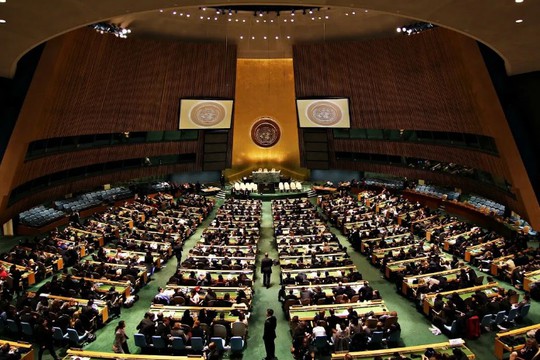 On one side is the West and its allies, led by the United States, tired of playing the world's police officer, but spearheading support for Ukraine in a Europe traumatized by the return of war. On the other side is Russia, a member of the Security Council and accused of violating the UN Charter by invading its neighbor. Moscow is supported cautiously and not without ulterior motives by China.

Finally, there's a heterogeneous group, represented by India, Asian countries, African countries (such as South Africa), the Middle East and South America, which do not want to choose sides and are concerned about the diplomatic, food and energy consequences of this war on the European continent. "This conflict marks a break, that of the declining influence of the West, despite its mobilization on the side of Ukraine, and the great return of the United States in Europe," said former French diplomat Gerard Araud.

The task promises to be difficult for the West, even if the leaders of China and India are absent from New York. Declared a pariah in the Western world, the head of the Kremlin has the opportunity to show that he is not completely isolated. Shortly before the opening of the UN General Assembly, he met in Samarkand on September 15 and 16 with his Chinese, Indian, Iranian and Turkish counterparts on the sidelines of the Shanghai Cooperation Organization summit, which competes with the summit of the G7, a group of industrialized countries.

The President of Russia welcomed "the growing role of new centers of power in the world." The SCO leaders intend to challenge the current system of international relations and, above all, the weakening dominance of Western countries led by the United States in it.

Moscow's problem - how to find allies - is becoming no less relevant for Western countries fearing a widening gap between the West and the rest of the world. To their surprise, after the escalation of hostilities on February 24, Washington and European capitals realized that it was not so easy for them to enlist support for their actions in the "non-Western" part of the world.

On March 2, only four states (North Korea, Syria, Eritrea and Belarus) voted with Russia against a text requiring Moscow to "immediately stop the use of force against Ukraine." On the other hand, the West did not receive support either. Thirty-five of the 193 members abstained, not just the huge China and India. 17 out of 35 African states, including South Africa, Senegal, Angola, Algeria and Mali, did not vote for the resolution prepared by the West. And other countries, such as Cameroon and Morocco, refused to participate in the vote, apparently fearing negative economic consequences for themselves. Some capitals voted in favor of the UN resolution while opposing Western sanctions. This risks reducing the impact of our sanctions on Russia and creates a temptation for non-Western countries to circumvent them. This applies, for example, to Turkey, a member of NATO, and Brazil.

The risk now is that Moscow will benefit from a kind of "de-westernization" of world trade at the expense of countries that support sanctions.

Here is the opinion of Thomas Gomart, director of the French Institute of International Relations: “This situation led to the creation of a new geography around three large groups of countries: the zone of the Organization for Economic Cooperation and Development (OECD), the member countries of which for the most part have a common democratic system of government and from these positions subject the population of Russia to sanctions; countries of the Shanghai Cooperation Organization (SCO) that do not condemn Russia and do not impose sanctions; and others that are rather indifferent to the conflict…"  - the expert adds.