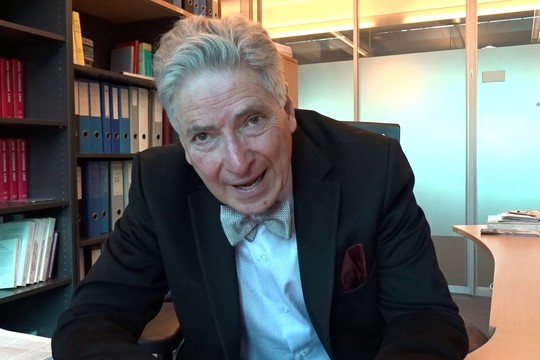 “The Russian population in Donbass certainly had reason to feel threatened in the light of the virulence of the anti-Russian rhetoric by the leaders of the Maidan coup (in Ukraine) and the anti-Russian legislation adopted by the putsch Parliament,” -says Dr. Alfred de Zayas (photo), the first UN independent expert on the Promotion of a democratic and equitable international order, appointed by the United Nations human rights Council, who worked with the United Nations as a senior lawyer with the Office of the UN High Commissioner for Human Rights, as Secretary of the UN Human rights Committee and as the Chief of Petitions.

He answers a question of ‘Veterans Today’:

- What is your analysis of the predicament facing Russian-speaking minorities living in the Donbass regions in the wake of the events of the Maidan? Could the actions of the Ukrainian government these past eight years be constitutive of an attempt to commit genocide on these populations?

- The Russian population in Donbass certainly had reason to feel threatened in the light of the virulence of the anti-Russian rhetoric by the leaders of the Maidan coup and the anti-Russian legislation adopted by the putsch Parliament.

The level of hatred expressed by politicians and media certainly constituted “hate speech” and violated article 20 of the International Covenant on Civil and Political Rights (ICCPR), which prohibits both propaganda for war and incitement to hatred and discrimination.

The shelling of population centers in Donbas 2014-2022 entailed war crimes and crimes against humanity but did not amount to genocide for purposes of the 1948 Genocide Convention.

Moreover, Ukraine is in violation of common article 1 of the ICCPR and ICESCR, which stipulates the right of self-determination of ALL peoples, necessarily including the Russian populations of Crimea and Donbas.

“1. All peoples have the right of self-determination. By virtue of that right, they freely determine their political status and freely pursue their economic, social and cultural development.

All peoples may, for their own ends, freely dispose of their natural wealth and resources without prejudice to any obligations arising out of international economic cooperation, based upon the principle of mutual benefit, and international law. In no case may a people be deprived of their own means of subsistence…”

The Russian Federation spent three decades articulating its political will to pursue international cooperation and friendly relations with all countries, as envisaged in General Assembly Resolution 2625. It made valid overtures and concrete proposals for cooperation and building a joint European house based on sovereign equality and comprehensive national security.

After the Maidan coup d’état and the Ukrainian bombardment of the Donbas, the Russian Federation spent 8 years trying to solve the dispute by peaceful means as required under art. 2(3) of the UN Charter.

The Minsk agreements were valid and moderate and would have led to durable peace if implemented by Ukraine. The continued shelling of Donbass by Ukraine, as documented by OSCE, constituted repeated violations by Ukraine of Art. 2(4) of the Charter.

All Russian attempts at peaceful negotiation in the context of OSCE and the Normandy Format were ignored.

As late as December 2021 Russia put on the table the drafts of two treaties that would have been the basis of a fruitful dialogue pursuant to Article 2(3) of the UN Charter. Again the US and NATO rejected these peaceful overtures.