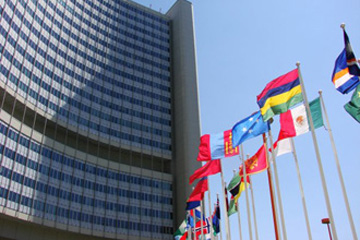 The ongoing crisis of global governance naturally turnes the spotlight on the role and potential of the UN. The collapse of the bipolar system, the unipolar world inability, the mounting pressure of global challenges, the lingering financial crisis altogether created a climate of heightened expectations around the UN. While broad consensus exists on the need for the reform - controversy persists virtually over the reform’s every practical aspect.

Views on the subject range from calls for reinforcing the UN as a unique and absolutely irreplaceable international platform – “Who, if not the UN” - to near-total skepticism concerning the UN future.

The majority of the world’s countries do hold that the UN should be given the key role in tackling a whole array of global challenges. The corresponding agenda linked to the issues of food security, climate change, nonproliferation, human rights, etc. (is maximally inclusive and more or less counts as common knowledge.) Yet there seems to be much less clarity concerning the UN capacity when it comes to sustainable development and the health of the global economy.

We saw recently that the world’s economic nosedive prompted self-organization within a fairly exclusive club of industrialized nations as the optimal form of emergency response, while the UN - a global forum - failed to produce a coherent plan for an overhaul of the global financial architecture.

Meanwhile, ad hoc groups like G20 are evidently unprepared to take responsibility for the economic dimension of global governance in the long term. On the eve of the Seoul summit, the G20 countries were locked in a bitter dispute which led some commentators to say that “the expanded group of leading economies has gone from a would-be concert of nations to a cacophony of competing voices as the urgency of the financial crisis has waned and the diversity of political and economic values within the group has asserted itself”. *

The above may be an overstatement, but the truth is that groups - economic or regional – are unable to overshadow the UN as a universal platform.

On the other hand, let us face it: in the foreseeable future the UN will hardly become efficient in harmonizing nations’ individual economic ego. The vision for the UN future in the context of the above may be to let the top-representative forum deal with problems arising in the realm of what is becoming known as the G-zero world - the world where major powers are unable to achieve a reasonable extent of synchronism.

A couple of crash tests - on both the conceptual and the instrumental levels - likely await the UN as a concert of sovereign countries.

A considerable portion of the world’s conflicts stem from nations’ deep-seated instinct of concern over shortages of the depleted global natural resources. In this light, US President B.Obama’s speech at the recent UN General Assembly in which he set fostering economic growth worldwide as a goal left a strange impression. We would be living in a totally different world - of not necessarily better than that of today, actually - if some magic could remove all natural limitations on commodities supply. “Anyone who thinks that steady growth can continue indefinitely, is either a madman or an economist”. The statement belongs to British scholar Kenneth Bowlding, who, by the way is an economist himself.

These days, there is a tendency to stubbornly ignore the obvious: the positivist model of growth had long proved unsustainable. From the Russian or Greek traditional perspective, the outcome should have been readily predictable, in fact. It was equally predictable that amidst recurrent economic downturns mankind would prove unable to formulate an alternative development model.

Today‘s countless “sub-crises”, financial and other, can be traced back to the root crisis provoked by acting in line with the progresist model of unlimited growth. The “sustainable development” slogan helps mankind stay oblivious to the fact that - due to the character of the underlying model of development - the global economy rests on shaky foundations.

At the moment we find ourselves at the origin of a new phase of global development.  The combined share of Europe, the US, and Canada in the global economic output shrank from 68% in 1950 to 47% in 2003 (notably, the picture was dimmed by the phasing out of much of the former Soviet Union’s economic potential). An extrapolation of the trend shows that four decades from today the world outside of the West’s orbit will account for 80% of the global productivity while the populations in the US, Canada, and Europe (and in Russia) will be contracting and aging. According to the World Bank’s forecast, the middle class in developing countries will reach 1.2 billion by 2020, a 200% growth compared to 2005. The emerging middle class across the world will be adopting Western-style living standards, thus claiming an ever greater share of the world’s natural resources.

The developing countries’ economic boom along with the consumer boom trailing it will not only challenge the Western dominance but also put in jeopardy the earth as an ecosystem.

At the point, one might feel tempted to ask: should the UN pass a resolution condemning consumerism-oriented sociocultural order? Paradoxically, the option need not be rejected outright. Anyway, with no declarations stressing the obvious being floated,  practical steps should be premised in the approach. The inadequacy of the present socioeconomic order in the settings of dwindling natural resources is already the cause behind painful conflicts proliferating across the world.

The second crash test to be endured by the UN is the world’s sinking into the era of permanent turbulence.

Leon Trotsky, a sinister figure from the epoch of Russia’s Bolshevist coup, dreamed of what he described as “a permanent revolution”, reflecting the world evil’s dream of the advent of global chaos and anarchy. The recent unrest in North Africa and the Middle East, the spill of conflicts and crises across the world evoke unfortunate similarities with Trotsky’s vision, breeding fears that we are witnessing the onset of turbulence that indeed has a chance to become permanent. It would be unwise to discount the notion as purely alarmist.

Though upon Roosevelt’s death the UN largely took to playing by the rules of the bipolar world, it still must be credited with ensuring five decades of global stability.

We largely owe it to the UN that the Cold War never escalated into a real military conflict. Assessing the role played in the era by the UN, Dr. D. Kuznichevsky from the Russian Institute for Strategic Studies wrote: “The model survived the war in Korea as well as the Berlin and Caribbean crises. But things changed in the 1990ies following the demise of the USSR. The US and Washington-led NATO, not the UN, launched the campaigns in Yugoslavia, Kosovo, Afghanistan, and Iraq. The Westphalian System with its unquestionable recognition of national sovereignty began to crumble”.

The unintended benefit of the world’s current turbulent condition is that under the new circumstances Washington and NATO do have to seek the UN blessing in international affairs and to refrain from unauthorized campaigns as it was the case with presidents  B.Clinton and G.Bush. In the eyes of Obama administration, only a UN mandate could render legitimate the coalition’s campaign in Libya.

At the same time, the developments around Libya - as well as sanctions against Iran - highlighted certain weaknesses of the UN and the Security Council. It has transpired that the UN observation over the implementation of the resolutions passed by the UN Security Council is completely lacking.

By monopolizing the right to interpret the UN Security Council’s resolutions, the executors de facto convert them into licenses to put into practice their own designs.

It would be a good idea to give the UN Security Council’s sanctions a higher status by tightening control over the interpretation and implementation of the provisions the sanctions carry.

It is also important to exclude the possibility of any additional sanctions, the more so the sanctions  that have never been the subject of discussions at the UN.

I am convinced that Europe can more than others benefit from the above measures. Believing in Europe’s guaranteed immunity to the global turbulence would be an illusion, but for those outside of European Ecumene, the continent still looks like an island of stability. Wider Europe has all the possibilities to take part in reforming the UN to transform the organization in line with modern challenges.

In the context, I would like to cite the statement made by Russia’s late Patriarch Alexy II at the Parliamentary Assembly of the Council of Europe in Strasbourg: “In concert, the Christian notions of dignity, freedom, and morality add up to a unique European mental code which brings immense potential to individual and public life”.