UN Security Council: A card-sharp at the table 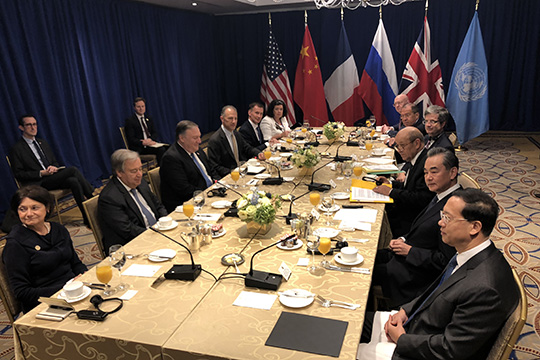 Orange juice, jam and biscuits are on the table for a working breakfast served for the foreign ministers of the five permanent members of the UN Security Council.

But British Foreign Secretary Jeremy Hunt, wasn’t able to bring himself to ask for a personal meeting with Sergey Lavrov given all the groundless accusations Theresa May has leveled at Russia. How could he look him in the eye? And yet, he told the media that a meeting did take place. In all evidence, he was trying to save face. “This is just more of the same cheating by our British colleagues,” Foreign Ministry Spokesperson Maria Zakharova commented.

Journalists were allowed for just thirty seconds at the working breakfast that preceded the Security Council’s meeting on North Korea. US Secretary of State Mike Pompeo, who was to preside over the UN Security Council meeting, was no longer going to be able to smilingly evade saying what was in store for the DPRK.

“TRUST IS THE KEY TO SOLVING THE KOREAN PROBLEM”

Pompeo showed his cards during the Security Council meeting. He called for continued pressure on North Korea: “Enforcement of UN Security Council’s sanctions must continue vigorously and without fail until we realise final, fully verified denuclearisation.”

At the meeting, Pompeo’s position was supported by the UK, the Netherlands and France. Sergey Lavrov expressed a different point of view: North Korea’s steps to denuclearise should proceed in parallel with the relaxation of sanctions.

Even as Pyongyang makes a point of showing openness to cooperation, the West is continuing to tighten North Korean sanctions. Lavrov described this policy as “ill-timed,” reminding everyone that any negotiations were a “two-way street.”

Sergey Lavrov urged consideration of at least small steps to incentivise the DPRK: “We are confident that building trust is the key to reaching a political and diplomatic solution to the problems of the Korean Peninsula. The agreement on restoring rail and motor traffic between North and South that was reached in Pyongyang is a crucial step in this direction. Russia actively supports the rapprochement between North and South Korea and the efforts to solve the problems of the Korean Peninsula in general. We have long been calling on our partners to join in these efforts, including as part of implementing a relevant roadmap, which Russia and China adopted last summer and which is de facto being enacted today.”

The Russian foreign minister called for a joint effort to devise a system of international security guarantees that would serve as the decisive factor in achieving the Korean Peninsula’s denuclearisation.

The discussion at the UN General Assembly saw Israeli Prime Minister Benjamin Netanyahu put on something of a show. Like Petr Poroshenko before him, he mounted the rostrum with “undeniable” evidence that Iran was guilty of allegedly continuing to pursue nuclear weapons and was making progress. He even brought along an illustration – a map with markings – that was supposed to convince listeners.

Netanyahu accused Iran of having a “secret atomic warehouse” in Tehran, where 15 “ship containers” were stored, each of which could contain nuclear materials and equipment – 300 tonnes of materials in all. He also called on the IAEA to inspect the facility immediately. “Do the right thing. Go and inspect; go and investigate,” he said. The prime minister urged support for reinstating US sanctions against Iran.

The Iranian delegation walked out of the hall in protest. By the way, 12 IAEA inspections and post-inspection reports confirmed that Iran had not breached the agreement.

The Israeli prime minister went on to say that he hoped to achieve peace, including with the Palestinians – this after the United States recognised Jerusalem as the Israeli capital! Well, his statement can hardly be regarded as a good jumping off point for new talks between Israel and Palestine.

The last direct talks between the parties to the Middle East conflict were broken off in April 2014 after nine months of unsuccessful attempts to narrow the divide in their positions.

As always, Russia stands ready to mediate in the Middle East. The head of the Palestine National Authority, Mahmoud Abbas, met with Sergey Lavrov on the sidelines of the UN General Assembly. The Palestinian leader declared that there were three main issues confronting Palestine today: relations with the Americans; relations with Israel; and the unification of Hamas.

Addressing the UN earlier, Mr Abbas stated that the US administration’s decisions to close the PLO office in Washington, recognise Jerusalem as the Israeli capital and move the US embassy there from Tel Aviv violate UN Security Council resolutions and undermine the peace process.

According to Mr Abbas, the road to peace has been outlined by UN Resolution 67/19 approved on November 29, 2012 by the overwhelming majority of votes and defining the State of Palestine on the basis of the 1967 borders.

“Jerusalem is not for sale, and the Palestinian people’s rights should not be used as a bargaining chip,” he said in conclusion. 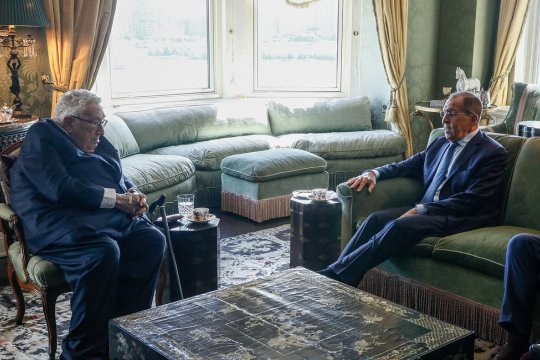 The General Assembly not only makes decisions but also sets new goals. The ex-US Secretary of State Henry Kissinger certainly has answers to many political and diplomatic questions.

Sergey Lavrov met with the 95-year-old foreign relations expert without any media present.

During the day, Sergey Lavrov held a dozen working meetings. It was announced that Russia was abolishing visas with Jamaica, Surinam and Saint Vincent and the Grenadines, a former British colony in the Caribbean.

Walking down a corridor after the latest meeting and talks, the Russian foreign minister shared a kind word with journalists who camp out for hours outside meeting rooms for news and who visibly brightened somewhat seeing him approach: “It’s a glamorous profession that you have!”