Unpunished. The United States thinks it’s ‘the exception to the rules of war’ 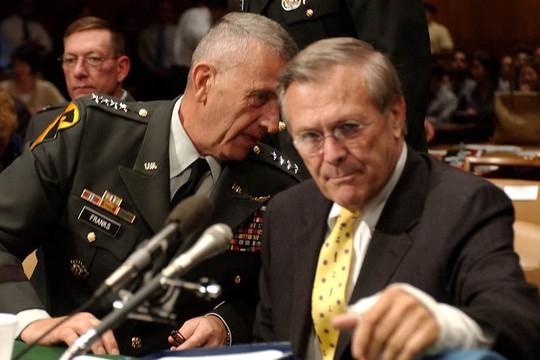 The architects of those Nuremberg trials—representatives of the United States, the Soviet Union, the United Kingdom and France fully expected that the new United Nations would establish a permanent court where war criminals who couldn’t be tried in their home countries might be brought to justice. In the end, it took more than half a century to establish the International Criminal Court (ICC). Only in 1998 did 60 nations adopt the ICC’s founding document, the Rome Statute. Today, 123 countries have signed.

Guess what superpower has never signed the ICC? Here are a few hints? – writes Rebecca Gordon in an article at “The Nation”:

Its 2021 military budget dwarfed that of the next nine countries combined and was 1.5 times the size of what the world’s other 144 countries with such budgets spent on defense that year.

Its president has just signed a $1.7 trillion spending bill for 2023, more than half of which is devoted to “defense” (and that, in turn, is only part of that country’s full national security budget).

In 2003, it began an aggressive, unprovoked (and disastrous) war by invading a country 6,900 miles away.

Yes! The United States is that Great Exception to the rules of war.

While, in 2000, during the waning days of his presidency, Bill Clinton did sign the Rome Statute, the Senate never ratified it. Then, in 2002, as the Bush administration was ramping up its Global War on Terror, including its disastrous occupation of Afghanistan and an illegal CIA global torture program, the United States simply withdrew its signature entirely. Secretary of Defense Donald Rumsfeld (photo) then explained why this way:

“The ICC provisions claim the authority to detain and try American citizens — U.S. soldiers, sailors, airmen and Marines, as well as current and future officials — even though the United States has not given its consent to be bound by the treaty. When the ICC treaty enters into force, U.S. citizens will be exposed to the risk of prosecution by a court that is unaccountable to the American people, and that has no obligation to respect the Constitutional rights of our citizens.”

The assumption built into Rumsfeld’s explanation was that there was something special — even exceptional — about US citizens. Unlike the rest of the world, we have “Constitutional rights,” which apparently include the right to commit war crimes with impunity.

Even if a citizen is convicted of such a crime in a US court, he or she has a good chance of receiving a presidential pardon. And were such a person to turn out to be one of the “current and future officials” Rumsfeld mentioned, his or her chance of being hauled into court would be about the same as mine of someday being appointed secretary of defense.

The United States is not a member of the ICC, but, as it happens, Afghanistan is. In 2018, the court’s chief prosecutor, Fatou Bensouda, formally requested that a case be opened for war crimes committed in that country. ‘The New York Times’ reported that Bensouda’s “inquiry would mostly focus on large-scale crimes against civilians attributed to the Taliban and Afghan government forces.” However, it would also examine “alleged C.I.A. and American military abuse in detention centers in Afghanistan in 2003 and 2004, and at sites in Poland, Lithuania, and Romania, putting the court directly at odds with the United States.”

Bensouda planned an evidence-gathering trip to the United States, but in April 2019, the Trump administration revoked her visa, preventing her from interviewing any witnesses here. It then followed up with financial sanctions on Bensouda and another ICC prosecutor, Phakiso Mochochoko.

So where do those potential Afghan cases stand today? A new prosecutor, Karim Khan, took over as 2021 ended. He announced that the investigation would indeed go forward, but that acts of the United States and allies like the United Kingdom would not be examined. He would instead focus on actions of the Taliban and the Afghan offshoot of the Islamic State.

When it comes to potential war crimes, the United States remains the Great Exception. Wouldn’t it be wonderful if we were just a little less exceptional?

If, for instance, in this new year, we were to transfer some of those hundreds of billions of dollars Congress and the Biden administration have just committed to enriching corporate weapons makers, while propping up an ultimately unsustainable military apparatus, to the actual needs of Americans?

Wouldn’t it be wonderful if just a little of that money were put into a new child tax credit? – asks Rebecca Gordon.