Unrest in Algeria: a blow against Russia? 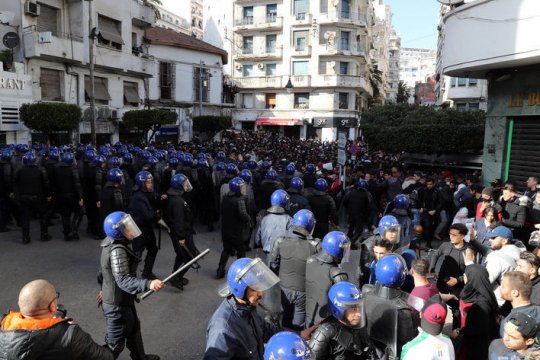 The political situation in Algeria has been aggravating as the number of the participants in protest rallies has amounted to one million and these are now being joined by representatives of the Algerian community in other countries – first of all, in France. Thousands of Algerians opposing the regime of incumbent President Abdelasziz Bouteflika have mounted rallies in a number of French cities while the most numerous demonstrations have been reported in Paris and Marseille. [1]

About 200 protesters and the same number of policemen have been injured amid promises by rally activists to paralyze the country’s economic and political life by means of a nationwide strike. For Algeria, a country which has been the stronghold of stability in North Africa for nearly two decades, such a course of events could turn out to be a severe trial. However, what is happening is due to a whole range of internal and external reasons.

Among the internal reasons that have been fuelling tensions in Algeria is the refusal by many Algerians to acknowledge the decision by 82-year-old Abdelaziz Bouteflika, who has been in power since 1999, to run for the fifth term in the presidential elections on April 18th.  What has caused a pubic outcry is not the president’s credentials (he played a significant role in the country’s struggle for independence and takes credit for securing an end to the bloody civil war in 2002), but the condition of his health. After surviving a stroke in 2013, Abdelaziz Bouteflika has been moving around in a wheel-chair and has been experiencing severe speech problems. He has been rarely seen in public over the past few years and had to send his representative to the Central Electoral Commission to register him as candidate to presidency from his ruling National Liberation Front. According to reports, at the time of registration the president was under treatment in Geneva and his condition has worsened of late. For this reason, many protesters announced that they had no intention of voting for an “empty place” alleging that the candidate in question barely understood what elections he would be taking part in.  «We don’t even know whether our president is still alive, or whether he is dead. We don’t know who is acting on his behalf», - the French Le Monde quotes one of the protesters as saying. [2]

Nevertheless, shortly after the protests erupted the Algerian news media published the written version of the address to the nation by President Abdelaziz Bouteflika, in which the president made it clear that he had opted in favor of nominating his candidacy following «requests from the civil society and the political class». «Millions of Algerians have expressed their willingness to back my candidacy by collecting signatures and making their own personal contributions», - the president wrote. He praised the «feeling of civil duty», which, in his words, drove the participants in street protests: «I want to make it clear that I will not allow anyone to gain control of my country’s riches or its future in the interests of some underground influence groups».

Should he win in the elections, Abdelaziz Bouteflika has promised to organize a nationwide dialogue so that citizens and political groups alike could discuss how to reform the system of government in Algeria and prepare the draft of a new Constitution which will be then put to vote at the nationwide referendum. On top of that, the incumbent president signaled readiness to step up struggle against corruption and assured the country’s citizens that the fifth term in office would in any case become the last for him. [3]

In turn, Algerian Prime Minister Ahmed Ouyahia has called for peace and quiet having warned the street protesters about the destabilizing consequences of their actions: «People were offering roses to the policemen, which is good. But I would like to remind you that the turmoil in Syria started with roses too». «They say some are calling for nationwide strikes but I remember the strikes in 1991», - the prime minister said recalling the tragic events of Algeria’s recent history, – when the Islamists took advantage of the protest rallies and political instability in the country to launch their armed struggle for power.

However, political processes at home are not the only factor underlying the current protests in Algeria. Unlike its Maghreb neighbors, Algeria survived the turmoil of the 2011 “Arab Spring” in good condition and with minimum pain. The Algerians received an injection against mass protests when the disturbances of the late 1980s spilled into a decade of civil war, - says Karima Diresh, an expert on North Africa at the Paris-based National Scientific Research Center. In her words, this cost Algeria about 200, 000 killed, and dozens of thousands still unaccounted for. [4]

That’s why what causes the greatest concern in the current situation is not purely internal processes, but the striving of external forces to take advantage of the protests and instill them with a particular urgency. According to reports, standing behind the protest movement are not only activists of the Algerian diaspora abroad but also certain groups within the leadership of the European Union and some in the United States, which are extremely annoyed with the Algerian leadership for faltering in two vital sectors –the military-political and the energy.

In terms of military-technical cooperation, Algeria is one of Russia's key partners - not only in Africa, but worldwide. According to a report by the Stockholm International Peace Research Institute (SIPRI), in a period from 2013 to 2017 Russia supplied Algeria with weapons for a total value of 2.4 billion dollars, which accounted for 59% of the Algerian arms imports. According to 2016 reports, Algeria came third in the list of buyers of Russian weapons ($ 923.6 million), running ahead of Vietnam and coming close to China ($ 958.8 million).

This is largely due to two major factors – firstly, the historical traditions of cooperation which go back to the days when independent Algeria was brought into being with the support of the USSR, and secondly - the country’s strained relations with neighboring Morocco over the Western Sahara. This conflict forces the Algerians to tirelessly strengthen their combat capability.

On the whole, trade and economic cooperation between Russia and Algeria has been developing progressively. According to the results of 2017, Algeria ranked second among African countries in imports from Russia, amounting to 4.6 billion dollars,  after Egypt (6.2 billion dollars). In 2016, the Russian-Algerian trade did not exceed $ 4 billion.

In the course of his visit to Algeria in October 2017, Russian Prime Minister Dmitry Medvedev discussed in detail with the country's leadership the prospects for the supply of Russian technologies and knowhow in order to create a national atomic industry. “A trustworthy regulatory and legal framework has been set for cooperation in the nuclear power industry,” the head of the Russian government said back then adding that Russia is already preparing nuclear industry specialists for Algeria. “At the same time, we are ready to consider projects for the generation of “clean” power at wind and solar stations,”- Dmitry Medvedev said. [5]

Plans by the Algerian government to reorient gas supplies to domestic consumption caused an immediate negative reaction both from the European Union leadership and in the United States. Given the reduction of gas production in the Netherlands and Norway, it is uninterrupted supplies from Algeria that should largely ensure the energy security of Europe and thus allow it to reduce its dependence on Russian gas.

Another option is LNG supplies to Europe from the United States, but their volumes largely depend on the price and demand in European and Asian markets - primarily in China, where the situation has been following an unwelcome course, from the point of view of Europeans.

According to reports by the General Administration of Customs of China for 2018, the growth of China's gas imports compared to 2017 amounted to 31.8%. By 2025, China’s additional demand for LNG will hit some 78 billion cubic meters, -  analysts at Vygon Consulting say: “In fact, this means gas imports will double, even without Taiwan, by the middle of the next decade.” “China will likely  continue to absorb the growth of supply on the LNG market as new terminals are commissioned, primarily in the US,”- says Fitch Corporation Director Dmitry Marinchenko. According to the company’s reports,  if the above trend persists, by 2024 the absolute volumes of the Chinese gas market will grow almost fourfold. [7]

In the current situation, we should expect more intervention from the United States and the European Union in order to provide Algeria with a ruling politician who would act in line with Western interests. So far, this politician is believed to be the richest man in the country, the billionaire industrialist Issad Rebrab, who makes no secret of his orientation towards France. However, he is already 74 years old, which makes him a transition figure. “The nationalist government formed on the basis of the National Liberation Front deliberately restrained Algerian-French ties, although from the geographic point of view, France, or Italy, are the two most suitable trading partners for Algeria. The younger generation is different. There are a lot of pro-French and pro-American representatives among the opposition who know little about the role the USSR played in the liberation of their country,”- testifies Sergey Balmasov, an expert of the Russian Council on International Affairs. [8]

In addition, the current situation plays into the hands of Islamists who will undoubtedly try to replay the scenario of the civil war of the 1990s with more gains for themselves. And this is fraught with a new escalation of tension in  North Africa, the Mediterranean and the Middle East.