US and Talibs: No Longer Irreconcilable 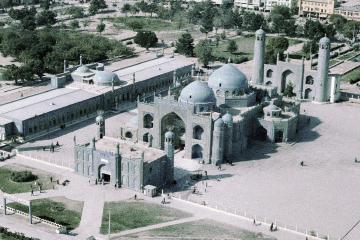 The US Administration and Afghanistan's government chose to get in touch with the Haqqani clan renown as a particularly ominous group in the ranks of the Afghan resistance. No doubt, the step reflects Washington's awareness of its inability to prevail in the conflict in Afghanistan, and the Talibs' guerrilla tactic must be credited with efficiency high enough to force the US ask for peace, which is the objective the anti-Western tribal coalition has been pursuing from the outset. So far the contacts are indirect and remain carefully disguised, but the circumstances are of minor importance against the overall trend.

The pressure exerted by the Pakistani Talibs on NATO forces in Afghanistan has grown visibly over the past several months. Since the early October, the key route used to supply the Western coalition in the country suffered four attacks which the Talibs advertised as revenge for NATO air strikes on the Pakistani border zone and the accompanying civilian casualties. The onslaught will likely continue until NATO deactivates the transit route starting in Pakistan and traversing the Khyber Pass. Islamabad already had to close one of the route's checkpoints in response to a US drone raid.

NATO is about to face a critical situation in Afghanistan considering that over 50% of the supplies consumed by the Western coalition in the country are delivered via Pakistan. The US and its allies therefore have to rely increasingly on the route passing across Russia and the Central Asian republics which, according to the Pentagon, has been used to channel around 1/3 of the supplies since the signing of the 2008 civilian rail transit agreement by Moscow and Brussels.

In the meantime, drone raids targeting the Talib-controlled provinces make militants relocate to safer areas. According to Newsweek, early this year, some 70 – 150 Talibs and militants from the Islamic Movement of Uzbekistan sneaked into Tajikistan from Afghanistan. As a result, the insurgency epicenter is drifting towards the border zone between Afghanistan and Tajikistan where the militants are setting up their bases, thus gaining positions closer to the latter Central Asian republic and - from a broader perspective – to Russia.

Newsweek cited a Taliban field commander from the Kunduz province as saying that quite a few militants from Central Asia had joined the Talibs in the 1990ies following failed attempts to overthrow their home republics' regimes. Now they seem ready to put the buoyancy of the respective governments to new tests, and new instabilities at the borders of Russia's southern neighbors are further eroding the security of the Afghan border across which drugs are flowing in enormous quantities to the final destination in Europe.

Small groups of Tajik and Uzbek militants started penetrating Tajikistan by the end of last winter, eventually merging with the Islamic Movement of Uzbekistan in the northern Afghan province of Kunduz. As reported by Newsweek, some 70 members of the Islamic Movement of Uzbekistan passed the route since last year, and at the moment the number of militants who returned to Central Asia - mostly ethnic Tajiks and Uzbeks – supposedly is in the 100 – 150 range. The Kunduz administration is sending alarming messages that currently the south of the province is de facto controlled by the Talibs.

It became known that the majority of inmates who escaped from the Dushanbe prison not long ago found refuge in the Talib-dominated northern regions of Afghanistan. The Islamic Movement of Uzbekistan which shelters them claimed responsibility for ambushing the army convoy in the Rasht District's Kamarob Gorge which left 26 Tajik servicemen dead and declared that the attack was an act of retaliation for the persecution of believers in Tajikistan and for the country's alignment with the US in Afghanistan.

Seven militants were killed by the government forces roughly at the same time in the eastern part of Tajikistan during clashes with illegal armed groups. Sources in the Tajik police ministry indicated that the militants killed had been involved in an attack on an army convoy during which the death toll reached 40. It seems likely that Afghan and Pakistani militants also took part in the attack. Several days later, six Tajik national guards were killed and many more wounded by a blast that destroyed a military vehicle.

Having stirred up a hornet's nest in Afghanistan, the US exposed Russia's Asian frontiers to heightened risks. A truce between the US and the Talibs takes a deal with the traditionally reconcilable Haqqani clan which is based in Pakistan's North Waziristan and is regarded by Washington as an even greater center of power than the Quetta Shura led by Mohammad Omar. Newsweek has information that a Westerner not enrolled in any government agency is mediating between the US and the militants, met with Haqqani envoys a number of times in Pakistan, and helped the sides exchange messages.

Afghan president Hamid Karzai opened pompously the first meeting of the supreme council for peace which is supposed to forge links between Afghanistan's officialdom and armed opposition including the Talibs. The mission of the council is to facilitate the integration of the militants into the Afghan “civilian society”, though the Talibs stated on various occasions that talks with the administration would become an option only upon the withdrawal of the Western coalition from Afghanistan. Nevertheless, Karzai's envoys and the Talibs have already opened a secret dialog. In any case, the firm conclusion is that the US-led invasion of Afghanistan which was launched 9 years ago with the goal of displacing the Talibs ended in a total failure.