US armed forces in Central Asia – built to last 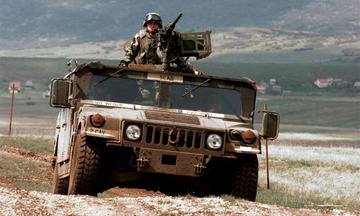 The US plans to build military training centers in Tajikistan and Kyrgyzstan. First these plans were announced last year and they received a wide response because earlier it had been announced that a Russian military base would be built in the south of Kyrgyzstan. Now Pentagon is not going to confine itself with Kyrgyzstan and plans to build military facilities on the territory of five states of the region. It implies the redeployment of part of military infrastructure of the US from Afghanistan to the former Soviet Central Asia and Kazakhstan and also the construction of NATO facilities there.

According to “EurasiaNet” (an internet-portal financed by George Soros), US Central Command’s counter-narcotics fund was to allocate more than $40 million for the construction of military training centers in the cities of Osh (Kyrgyzstan) and Karatoga (Tajikistan), a canine center and helicopter hangar near the city of Alma-Ata (Kazakhstan) as well as for the strengthening of border check points in Uzbekistan, Turkmenistan and Kyrgyzstan.

Pentagon estimates the construction of each border check point at $5-10 million. The location of the US border check point in Uzbekistan is not disclosed out but the location of the check points in Kyrgyzstan and Turkmenistan is quite remarkable. The Serahs check point (Turkmenistan) is on the border with Iran and the Kyrgyz check point (where the modernization of electricity supply and water supply and sewerage system is planned) – near Batken. Both check points are of geo strategical importance - first in case of a war between the US and Iran and second - in case of destabilization of the political situation in this part of the Fergana Valley like it was in 1999-2000 during the invasion of Islamic movement of Uzbekistan (IMU).

In Kazakhstan the US plans to build a new helicopter hangar near the city of Alma-Ata, a canine center and a center for inspection of transport vehicles, with the total construction costs amounting to $10 million. In Tajikistan the Americans plans to build a military training center in Karatoga (not far from the capital of Dushanbe) for Tajik servicemen. There they plan to practice combat actions in city conditions of a city and to train sharpshooters/spotters. The construction costs are estimated at $10 million. A similar center worth $ 5.5 million for practicing different kinds of combat actions in the course of border and counterterrorist operations should be built in the Kyrgyz city of Batken.

It has been known about the US plans to strengthen its military presence in Central Asia since last autumn when the Northern supply route through Russia began to function alongside with the transport route from Pakistan. It is known that Pentagon is working on the plan to deploy elite units of its special troops in Central Asia namely four battalions of the 3rd Special forces (airborne) group which has a long experience of fighting in Afghanistan.

In addition to Central Asia the US plans to deploy its forces in Southern Caucasus - in particular early warning radars in Georgia. It is expected that besides the radars Pentagon may locate a land military base and a naval base in Georgia with 25,000 servicemen.

Finally Pentagon is to build a special operations complex in Afghanistan near the Uzbek border worth $100 million. The complex with the area of 6 hectares will be located in Mazar-i-Sharif, 275 km north-west from Kabul and 56 km south from the Uzbek city of Termez. In 18 months the Americans are to build a united operational center, residential blocks, a communication hub, a center for tactical operations, storage facilities, a training center, a medical center, repair facilities a center for logistics, a canteen, recreation facilities and a doghouse. They plan to put the complex into operation in late 2012 early 2012. In longer perspective 2012-2016 the US Central Command plans to allocate another $3.8 billion on the construction of military facilities in the countries of the Middle East and Central Asia.

Even a brief look at the deployment of the US military objects shows that it almost fully repeats the geography of “the Eurasian Balkans” of Z. Brzezinski, who gave this geopolitical region a decisive role in fighting Russia on “the Grand Chessboard”. By locating its special troops, surveillance equipment and other forces in Central Asia and in the Caucasus after the withdrawal of its troops from Afghanistan in 2011 the US will ensure its military presence right besides Russia’s “belly” near the northern border of Iran and the western border of China. Here the Americans plan to deploy an intelligence network which will ensure control over the situation in the most important points of Eurasia.