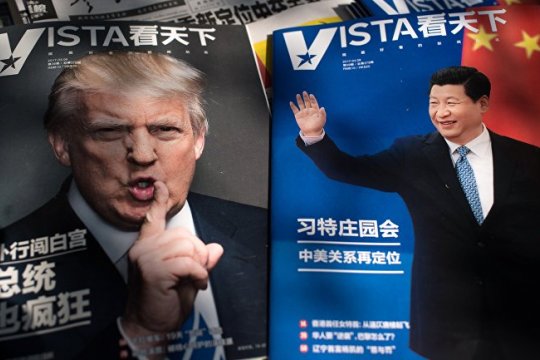 China and the United States have achieved tangible progress in their recent round of trade talks. This has given rise to cautious optimism about the possibility of striking a deal, writes the Chinese edition of Global Times. “Top-level economic and trade consultations in Washington proved successful in areas such as agriculture, intellectual property rights, currency exchange rates, financial services, expansion of trade and handover of ttechnologies,”- the article said. [1]

If this is so, not only Beijing and Washington, but the rest of the world will breathe a sigh of relief – so high in the “price to pay”. According to the IMF, if the United States boosts tariffs on Chinese imports by $ 250 billion from 25% to 30% and introduces a 10%- duty on the $ 156 billion worth supply of goods from China, the global GDP will fall short of 0.8 pp in 2020 (about $ 700 billion, which is comparable to the Swiss economy), and if the US doesn’t raise the tariffs, the losses will total 0.6 pp. By contrast, through concluding a deal and removing all existing tariffs, Washington and Beijing will add 0.8 pp to the global economic growth [2]

But is the "cautious optimism" of the Chinese newspaper justified? Rather than giving up on tougher tariffs, the United States has postponed the tariff rise for two months and has made it clear that it will cancel it on condition a full-fledged agreement is reached (presumably at the APEC summit in Chile in November). But on the eve of the summit, it is very likely that the US will think of something that will make the signing of such an agreement impossible.

It could be the “Uyghur issue”, or the situation in Hong Kong. Or the recent, “homemade product”. Amid reports about the possibility of clinching the first part of a trade deal between the United States and China, the US House of Representatives has adopted a resolution urging the US Secretary of State to make yearly assessments of whether China uses the status of Hong Kong to circumvent US sanctions.

Two other resolutions passed by the House of Representatives call for a ban on the export of certain military products from Hong Kong and condemn Beijing’s interference in the region. The Chinese Foreign Ministry said in response that "China will respond with effective countermeasures to ensure its sovereignty, security and development." [3]

All this is taking place amid reports that the most sensitive issues - state subsidies for high-tech industries, intellectual property rights, the situation around Huawei – have been put beyond the bounds of a future agreement. And each of these issues can aggravate to a conflict at any moment, thereby making such an agreement impossible.

Some experts view the trade truce as politically motivated. According to observers, the White House could agree not to raise tariffs on imports from China in exchange for information compromising J. Biden which Beijing is believed to possess. [4]

Undoubtedly, the continuing uncertainty over the settlement of US-Chinese trade disputes is producing a negative effect on global politics in general. For one, R. Kaplan observes: “Trump’s chaotic political aggression against China, despite the preliminary trade deal, and his inconsistent policies towards Russia have caused many in China, Russia and other countries to fall into a state of profound concern”.[5] And this is too mild a wording for what they think about Trump's policies in the two countries.

Given the situation, there is a high probability that a US-Chinese trade deal will suffer a fiasco, through US fault, which suggests that we should speak of reasonable pessimism rather than cautious optimism. And since Beijing and Moscow are fully aware of that, they plan their policies accordingly.