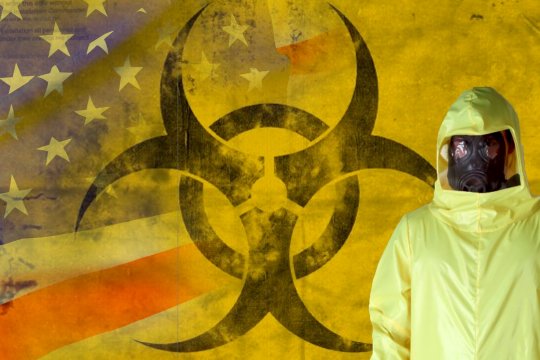 Two statements, almost simultaneously released by the Russia’s Foreign and Defense Ministries, once again raised the issue which, although rarely mentioned, is considered a “silent threat.”

On September 25, Vladimir Yermakov, director of the Foreign Ministry’s Department of Non-Proliferation and Arms Control, told the media that Russia will not allow biological experiments to be carried out on its borders [i] by the Americans. He was commenting on a statement earlier made by Georgia’s former State Security Minister Igor Giorgadze about biological experiments on people allegedly carried out by the US.

Giorgadze has long been in opposition to Georgian authorities and is a well informed man too. Speaking at a news conference in Moscow, he appealed to none other than US President Donald Trump with a personal request to investigate the activities of the Richard Lugar laboratory outside Tbilisi, where he said they are conducting experiments to study the effects of biological weapons on people. Giorgadze said that he has documents confirming the conduct of such experiments. He also provided data confirming the death of dozens of people as a result of those experiments.

The Richard Lugar Research Center for Public Health opened in 2011 as part of a US government program. According to experts familiar with the matter, the center is openly studying biological threats with the help of military program being implemented by biologists of the US Army Medical Research Unit - Georgia (USAMRU-G) and private contractors. These private companies are not accountable (sic!) to the US Congress and can circumvent US laws due to ... the lack of direct control.

Only US citizens with security clearance and diplomatic immunity have access to this biological laboratory [iv].

Commenting on the Lugar Center’s activities, the Russian Defense Ministry said in a statement that it had learned about "scandalous facts and documents pointing to serious violations by the American side of the Convention on the Prohibition of the Development, Production and Stockpiling of Bacteriological (Biological) and Toxin Weapons and on Their Destruction, ratified by the United States in 1972."

The Ministry’s statement also noted that during experiments on Georgian citizens of a drug produced by the company owned by former US Defense Secretary Donald Rumsfeld, 24 people died in December 2015, and later 49 more. It noted that so many deaths are not recorded even during large-scale epidemics in infectious diseases hospitals [v].

Our statements did not go unnoticed in Washington. The Pentagon denied these accusations outright. But how?! A Pentagon spokesman, Eric Pahon, dismissed them as “an invention of the imaginative and false Russian disinformation campaign against the West” and “obvious attempts to divert attention from Russia’s bad behavior on many fronts.”

“The United States does not develop biological weapons at the Lugar Center,” he added, confusing the old name of the Center with the new one. [vi].

How could Pentagon counter that?

Their logic is really strange too. They argue that Russia cannot be trusted because it is “misbehaving” – the ultimate example of Anglo-Saxon egotism used since the colonial times where anything that is not coming from them is “not good.”

The Defense Threat Reduction Agency (DTRA), which is in charge of US military programs at the Lugar Center in Georgia, conducted field tests with an unknown substance near the Russian border. In the spring of 2017, local residents complained about some “white powder” being sprayed by an UAV near the Georgian border. [viii].

According to the author of this news, the DTRA has access to the border between Russia and Georgia under a military program called “Georgian Land Border Security Project.” All work pertaining to this project was entrusted to a private company, Parsons Government Services International. DTRA has contracts with Parsons for similar “border security” projects in Lebanon, Jordan, Libya and Syria - an impressive geography... As for the Russian-Georgian border, the Parsons’ contract with the Pentagon is believed to be worth $9.2 million.

During last year’s meeting of the Presidential Council for the Development of Civil Society and Human Rights, President Vladimir Putin said that “biological material is collected throughout Russia from people of different ethnic groups living in different parts of the Russian Federation. This is being done purposefully and professionally. Why are they doing they do this? We are an object of a great deal of interest..."[x].

Caught red-handed, the Americans had nothing else to do than admit this with  a representative of the Air Force Training Command, Bo Downey, telling RIA Novosti that they were collecting Russians’ biological material to “study the musculoskeletal system" and that this work " was not intentional.. He acknowledged that the Center for Molecular Studies of the 59th Medical Air Group is engaged in this research to “identify various trauma-related biomarkers.” [xi].

“Not intentional”? They are telling these tall tales just as the US Air Force has announced an open tender for the supply of 12 samples of RNA molecules and synovial tissue of Russians! According to the terms of the tender, “donors must be citizens of the Russian Federation, Caucasians, without injuries of the musculoskeletal system and have tested negatively for HIV, hepatitis B, hepatitis C and syphilis.” [Xii].

And why are they collecting these samples in Russia? They could have been conducting such experiments at home, in the US. Or maybe Americans all suffer from HIV, hepatitis B, hepatitis C and syphilis?

Do they realize how stupid they look when they deny all this even when caught red-handed and confronted with hard facts?

Looks like the Yanks are testing our genotype to determine the kind of injuries that would be most critical for people living in different parts of Russia. Otherwise, why show so much care about the population of a country which has been unequivocally declared by the Trump administration as America’s “military adversary”?

This "silent" danger has taken the form of a network of such laboratories the US has set up along the entire length of the Russian border. No one can defeat Russia with military force even though many people have tried this over the past centuries. Therefore, they have created a system of undermining this country from the inside with the help of information war, by provoking internal conflicts and now with the threat of epidemics and pandemics.

According to the official website of the DTRA’a regional Eurasian office in Georgia (headquarters), they have already established their “footholds” in Armenia, Azerbaijan, Kazakhstan, Moldova, Ukraine and Uzbekistan. (The DTRA Eurasia office of the United States of Georgia has a number of countries. The budget of this Eurasian network is estimated at over $2 billion. And, of course, the Pentagon is justifying its biological expansion in Eurasia by “noble goals” – purportedly “to assist national scientific personnel in protecting the population from diseases, identifying deadly viruses and neutralizing them.” [xv].

Faced with all these hard facts, the Americans have been forced to make excuses.

Responding to media accusations, including in the US, Blake Bekstein, a program manager for Insect Allies, which is part of general bio-weapon development, said that he “does not agree with the conclusions,” although in an interview with The Washington Post he admitted that a number of technologies developed as part of the program may have a “dual purpose” and can be used both for defense and attack. [xxii].

Meanwhile, by so doing, the West is preparing a new large-scale provocation against Russia. In the pipeline is a new mechanism of “sanctions for the proliferation and use of chemical weapons.” They are also going to blame Russia for “illegal use” of such weapons by removing sanctions for such “use” from UN jurisdiction and actually “privatizing” them.