US Dollar vs. Yuan: Reasons Behind the Conflict 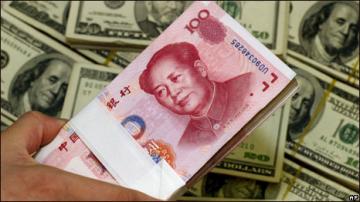 Debates between the US and China over the valuation of the yuan are currently gathering momentum. A new campaign of pressure on Beijing is initiated by the US Congress which proposed a bill authorizing the government to slap duties on China's imports based on the view that the yuan is grossly undervalued. The lower chamber approved the legislation.

Allegations that China keeps its currency deliberately undervalued are a recurrent theme. In my view, it is a new aspect of the situation that this year the protectionist turn is due to the US overall economic problems and global loss of competitiveness rather than to the state of US-Chinese bilateral trade or the potential impact of Yuan value on it. It is not unusual to blame domestic problems on external causes, and at the moment we witness the Congress of the country that used to be an industrial leader pursue the goal of weakening its own currency.

Statistics reflecting the dynamics of the values of the currencies of China's Asian rivals helps to clarify the yuan value issue. The 2008-2009 data is presented in Table 1.

Table 1. Annualized values of the currencies of Asian countries and territories vs. the US dollar

The conclusion is obviously that China was the only one in the group of countries to allow an appreciation of its currency during the crisis. Roughly the same can be said of the period of five years. In part, the recent situation followed the pattern of the 1997-1998 Asian crisis when China's neighbors had serious reasons to thank Beijing for maintaining the tight dollar-yuan link and toning down the export activity while they depreciated their currencies.

The domestic/US prices ratio comparison shown in Table 2 is equally informative. The indicator is known to be directly affected by the corresponding currency values and inflation.

The data shows that China's price-based competitiveness dropped considerably over the past five years, the reasons being the yuan revaluation and the surge of inflation in 2008-2009. As a result, Chinese companies are losing a number of markets – notably, the textiles market - to their peers from Vietnam and South Asian countries.

Another trend looming behind the above figures is that the prices in various East Asian countries (except for Japan) are converging while the pricing gap between them and the US persists. This happens to be a structural phenomenon stemming from the protracted dominance of the US and its currency in the global economy, and in this respect things are not going to change anytime soon.

The impression from the above is that China is not the only country that should have drawn the discontent of the US Congress over currency value and pricing policies. As for China, it is widely held that the yuan's being inflexibly linked to the dollar played a stabilizing role on the currency markets.

It should be noted that prices have been generally growing in China this year, and the trend combined with the gradual yuan revaluation which was relaunched last summer (after the break which commenced in the summer of 2008 when the yuan was linked to the dollar) exert downward pressure on the Chinese export and stimulate importing goods into the country. Suffice it to say that China's import rose by 45% over the first eight months of 2010 against the much more modest 35% export growth. The absolute value of China's trade surplus is decreasing (it totaled slightly over $100 bn over the same period of time). Import of US products to China topped 34% while China's export to the US added only 31%.

In other words, the trade deficit suffered by the US is neither attributable exclusively to China with its allegedly undervalued yuan nor owed mainly to the imbalance in the transactions with the country. The root cause is that the US competitive advantages in the industrial sphere are evaporating, which can't but alarm the US Congress, and that the US living standards propped up by the ability to pay with dollars for oil and whatever else are not easily sustainable. Given that, it is mere populism to demand that – under threat of sanctions which would be clearly at odds with the free trade ideology and the WTO norms – China subject its currency to a 20% or even 40% revaluation.

A drastic yuan revaluation would both hurt China's export-oriented companies, many of which are in part internationally owned, and deal a blow to the global financial system. On the eve of such a step, Beijing would predictably dump massive dollar reserves and the process would likely trigger a collapse of the already embattled global economy.