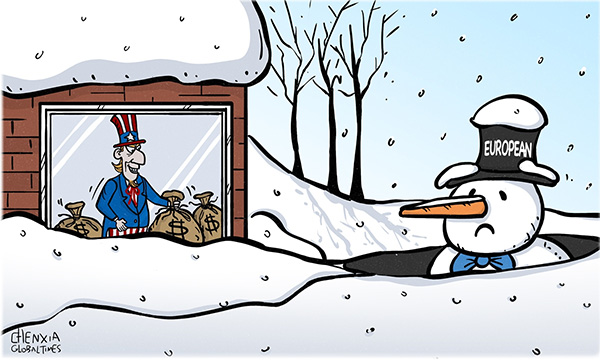 US oil and gas companies have made windfall profits thanks to the extraordinary geopolitical and energy tensions instigated by the US government,- states “The Global Times”.

For example, in the third quarter, Exxon Mobil Corp posted record-breaking profits of $19.66 billion, while Chevron Corp reported its second-highest ever quarterly profit of $11.2 billion, according to media reports. Undoubtedly, the US is the biggest winner in the turbulent global energy market, particularly Europe's energy crisis, due to the Russia-Ukraine conflict.

Biden and his administration have repeatedly complained about high oil prices and huge revenues made by US oil and gas companies, but it has failed to tackle the problem in any meaningful way other than paying lip services just for political optics amid the midterm elections. This just shows once again how inept the US government is in standing up to greedy interest groups and tackling issues directly related to the livelihood of its citizens.

This has become a cliché in the US, but it also has profound implications for the world, specifically for US allies in Europe.

Many European countries, hit by the energy crisis, are increasingly frustrated by the US' profiting from their misfortunes. French President Emmanuel Macron recently complained that US gas is too expensive, saying "one thing that can't go on for too long is us paying four times more than the price you sell to your industry." Some European countries also tried to join hands with Asian economies to demand the US to sell gas at lower prices. According to some media reports, US companies can earn more than $100 million per container ship of LNG bound for Europe.

The exacerbating energy crisis in Europe and the failure to tackle it mostly point to the divergence between Europe and the US, which clearly puts its own self-interests above that of its allies. They may be able to impose unified sanctions against others, but clearly they cannot unite when it comes to facing the consequences.

And this goes beyond the energy crisis. In fact, due to the competitive nature of the economic structures and development goals of the US and Europe, some conflicts that are hard to bridge in their economies are becoming more and more prominent, and their competition looks increasingly like a zero-sum game.

Even as Europe's major economies are bearing the brunt of the Russia-Ukraine conflict, they are also being undercut by the selfish and unfair economic and trade policies put in place by the US.

Such an expensive ‘friendship’ with the US has created a rift that damages transatlantic cooperation.

Indeed, there is growing realization in Europe about the divergence between the US and Europe and the complicated implications behind it.