US Hopes To Reverse History in Cuba 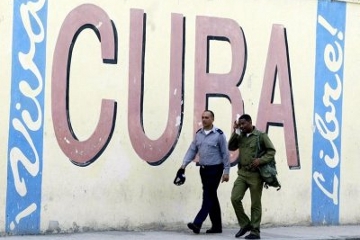 Among other revelations, WikiLeaks exposed the US Department of State's plans for a color revolution in Cuba. The agency's report epitomizing the genre describes a coordination forum of Cuba's three top opposition groups counting a total of 63 members. It convened in the office of the political department of the US Interests Section in Havana under the oversight of the Section staff. A keynote address was delivered by the department chief and followed by brief talks given by representatives of every group. A 70-minute emotionally charged movie about the toppling of S. Milosevic in Yugoslavia which provided a vivid description of the role played in the coup by the Opora youth opposition group was shown in conclusion.

The past several years have been a period of heightened activity for the US Interests Section in Havana. Washington is convinced that Cuba's anticipated economic reform opens exceptional opportunities to reverse the country's post-colonial history. The Section's objective is to bring down the current Cuban regime via a color revolution akin to those that shattered a number of East European countries. Washington strictly avoids contacts with the Castro brothers and is open to dialog exclusively with the Cuban leaders sharing the US vision of liberal-democratic values.

Currently the entire Section staff (which can as well be regarded as an autonomous intelligence network) is busy making arrangements for the coup and seeking out promising candidates for the the role of the Cuban Gorbachev. The efforts are coordinated by Jonathan D. Farrar, an expert in exploiting the human rights theme with a vast Latin American experience. Farrar's team numbers over 50 people including CIA resident Joaquín Monserrate and his aides D. Lawton and K. Duffy. Links to the Cuban opposition groups are maintained by K. Sullivan, G. Barbena, M. Koschina, and other Section staff members. They pass to their Cuban counterparts money, propaganda materials, cell phones, notebooks, and questionnaires meant to shed light on the issues of interest to the CIA. The US Interests Section relies heavily on an “independent” journalist network created in Cuba by the US.

In mid-December the Cuban parliament held debates over the country's socioeconomic development and modernization program. Raul Castro stressed in his talk that only the much-needed profound reform can help Cuba sustain and strengthen the socialist system in the settings of the permanent economic crisis. He brushed off the West's claims that Cuba would revert to capitalism as a result of the reform. He said the nation would never consent to dismantling the socioeconomic system preserved at high human costs and declared that the goal would be to safeguard and refine the Cuban model of socialism.

Expanding the private sector's share of the economy, promoting small business, and gradually switching to private enterprises the Cubans who are about to lose their jobs in the state sector altogether make the plan for 2012. In Washington, the transition is seen as a chance to destabilize Cuba. The “historical” generation of Cuban revolutionaries is going to submit resignations at the 6th congress of the Cuban communist party, thus creating openings for younger party activists. Evidently, engaging with them in the US interests is on the agenda of Farrar's team. Washington's expectations are mainly linked to the Carlos Lahe - Felipe Roque tandem which had lost positions in the Communist party's political bureau and the Cuban foreign ministry in an unsuccessful rivalry with the country's army and intelligence agencies.

Some of the potential candidates would never be acceptable to Washington. This is certainly true of Cuban intelligence veteran Col. Alejandro Castro Espín (b. 1965), the son and aide of Raul Castro. A security expert with combat experience earned in Angola, Alejandro authored The Terror Empire (2009) where he directed biting criticism at the theory and practice of the American imperialism. Predictably, US media and Cuban opposition outlets are working hard to discredit Alejandro.

The US Interests Section in Havana is expected to orchestrate a series of opposition rallies during the coming 6th congress of the Cuban communist party. The events are supposed to demonstrate the potential of the Cuban “resistance” which G. Bush's Administration started to shape in the hope to seize power in the country in the post-Castro period. It is unlikely that the opposition's campaigning is going to have a serious impact considering that Fidel and Raul obviously retain the grip on the situation in Cuba and continue to command the population's respect. The US Interests Section seems to be fully aware of the above – it is clear from Farrar's reports to Washington that the stability of the positions of Fidel and Raul remains unchallenged. Farrar admitted that the influence of the opposition in Cuba is close to zero due to the untamed egotism of its overly ambitious leaders. According to Farrar, thanks to the Mission's donations they enjoy a lifestyle which is out of reach for ordinary Cubans, thus building a barrier between the opposition and the constituency. Farrar also acknowledges the Cubans' commitment to national independence and their dislike for those of their countrymen who are employed by a country which always wanted to treat Cuba as its own backyard.

At the moment Cuba is opening an epoch of change, and it will be a matter of the future to gauge the success of the reform. The impression is that the Cuban revolution will not fade away. It proved viable at the face of powerful enemies, even when – immediately after the collapse of the Soviet Union – there was nobody to lend the country a hand in the US-Cuban standoff.