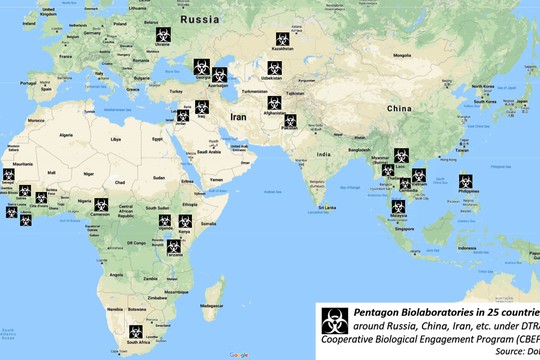 “Western nations actively hindered the Security Council decision on an international probe into the operations of US biolaboratories in Ukraine,” Lieutenant General Igor Kirillov, chief of Russian Nuclear, biological and chemical protection troops, said at his briefing in the Ministry of Defence. Here are some key points from his speech:

- Western nations actively hindered the Security Council decision on an international probe into the operations of US biolaboratories in Ukraine. The United States, France, and the United Kingdom voted ‘against’ the document, while Russia and China voted ‘in favour’ of it.

- On October 18, the White House released a new Biodefence Strategy, with a budget of $88 bln, including $17 bln in the first year. As part of the Strategy, the United States seeks to strengthen worldwide control over the global biological environment and reserves the right to perform ‘dual-use’ research, including research conducted outside of national boundaries.

- The papers disclosed once again indicate Kiev – Washington cooperation, as well as attempts to create pathogen control in Ukrainian laboratories by installing the PACS system, portions of which were provided to Ukraine under the title ‘US government property.’

- Some work is done in the United States to improve the pathogenic qualities of the pathogen COVID-19. In October Boston University developed a synthetic coronavirus pathogen based on the Omicron strain and the original 'Wuhan' variety. The modified virus acquired by the Americans killed 80% of infected model animals, causing abnormal neurological signs and significant lung damage. Antibody testing revealed an 11-fold decline in their capacity to neutralize the new virus, as well as the ineffectiveness of current vaccinations.

- Despite the fact that the US Department of Health and Human Services has decided to investigate the university’s management, the 'Boston experiment' highlights the lack of government oversight of genetic engineering and synthetic biology research in the USA.

- Despite the substantial biological dangers, the research was conducted with US government money and without the necessary authorisation from the National Biosafety Agency.

- The US system for controlling safety violations in biolaboratories is decentralised and covers only facilities that receive federal funding. There is little or no oversight of private laboratories, even though they conduct research with highly dangerous pathogens. T

- The high risk of accidents in US biolaboratories is one of the reasons for their withdrawal from national jurisdiction and transfer to the territory of third countries, including Ukraine and other post-Soviet states.

- The US DoD-controlled testing of infectious disease agents and poisonous chemicals on Ukrainian military members and the mentally ill, two of the most vulnerable groups of population, is of special concern.

- In response to new challenges and dangers, the Russian Federation suggests the following:

1) Firstly, to reopen discussions for a legally binding protocol to the BWC that contains lists of viruses, poisons, and specialised equipment, takes into account contemporary biological research and technology, and includes an effective verification system.

2) Secondly, confidence-building methods should be supplemented with information about biological defence research and development outside of national boundaries, as well as animal vaccine production facilities.

3) And finally, to establish a scientific advisory committee with broad geographical representation and equal rights for participants to evaluate advances in science and technology related to the Convention.

“The actual execution of our ideas will increase the openness of national biological programmes and the compliance of all States Parties with the provisions of the Convention,” said Lieutenant General Igor Kirillov.