US is militarizing Europe 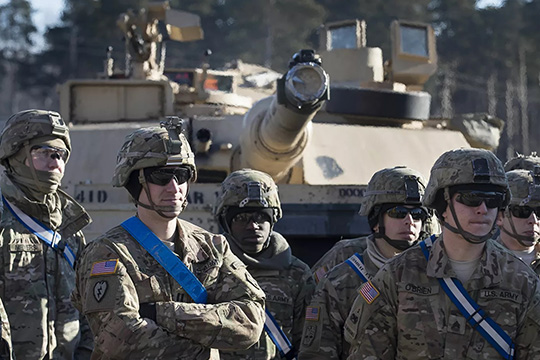 While pushing its NATO allies in Europe to increase their spending on joint defense, the United States is simultaneously moving its own troops to Europe. According to NATO Secretary General Jens Stoltenberg, there are a record number of US troops, not seen there since the start of this century, currently stationed on the continent. Moreover, an additional 20,000 GIs are expected to arrive shortly to take part in several exercises.

Jens Stoltenberg mentioned the increased US military presence in Europe at a joint meeting of the European Parliament’s Foreign Affairs Committee and the Defense and Security Subcommittee. He also said that the United States would temporarily transfer 20,000 troops to Europe for participation in a large-scale exercise named “Defender Europe 2020” and a number of other drills.

Stoltenberg noted that while Washington scaled down “for good reasons” its military contingent in Europe after the end of the Cold War, there are now more US soldiers and weapons deployed there than ever before. He didn’t mention the overall number of US troop currently stationed in Europe though.

“And we are faced with a paradox … despite the disagreements that we have …” North America and Europe are doing more together than we have done for many years,” Stoltenberg emphasized, and urged the European lawmakers to admit that the EU needs NATO and participation by US, Canada and Turkey in the effort to “contain Russia," engage in a dialogue with Moscow on arms control, in the fight against terrorism and in the search for answers to challenges from China.

US Brigadier General Sean Barnaby said that Washington plans to deliver 20,000 American soldiers to Europe to participate in a series of exercises in “the largest deployment of American troops in Europe over the past 25 years.”

Notably, commanding the “Europe Defender 2020” exercises, slated for March of this year, will be US officers with Washington's NATO allies from 17 countries assigned the auxiliary role of providing logistical support. Even though the upcoming drill will be mostly played out in Germany, some of its elements will take place elsewhere, including in Poland and the Baltic states. Responding to the US and NATO plans, Russia’s Defense Minister Sergey Shoigu said that “the practical actions of the alliance - whether it is the development of military infrastructure near the Russian borders or increased activity in the Black and Baltic Seas - lead to increased tension and require an adequate response from the Russian side.” [1]

While turning Europe into its military playground, the United States is ramping up its demands for Europeans to spend more on NATO’s collective defense, above all Germany, which is already trying to smooth over the military and political tensions that have emerged on both sides of the Atlantic. Former German Vice-Chancellor Sigmar Gabriel and Director of the German Institute of Economics Michael Huther actually recognize the inevitability of the increased defense outlays. In an article for the US magazine Project Syndicate, they said that Germany should spend an additional 0.5 percent of its GDP on financing NATO operations in the Baltic countries and Poland in order to diffuse tensions with Washington.

“The elephant in the room is Germany’s failure to increase its annual defense spending to 2% of GDP, as agreed at the 2014 NATO summit in Wales,” the authors wrote. According to them, in order to contribute to the alliance without raising concerns in Eastern Europe, Germany could spend 1.5 percent of its GDP on logistics and personnel, and an additional 0.5 percent on financing NATO operations in the Baltic states and Poland: “That would both bolster the eastern member states’ ability to defend themselves …and demonstrate Germany’s willingness to shoulder more responsibility.” [2]

The authors still recognize the hard fact that Europe’s decades-long dependence on the United States and the policies of the current US administration are prodding the Europeans to take on greater responsibility when it comes to dealing with strategic issues. According to them, “the Atlantic era is giving way to the Pacific era. Europeans must harbor no illusions that all will turn out well on its own. Now is the time to muster the courage and the will to take responsibility for our strategic interests.”

Moreover, "wars and conflicts along the European periphery are increasingly being decided by other powers, with Europe playing no discernible role in their resolution.” [3]

Notably, one of Washington’s key US allies in Europe, Poland, is busy ramping up its defense spending. During parliamentary hearings,  defense ministry representatives said that the country’s military budget for 2020 was set at almost 49.997 billion zlotys (around $13.33 billion), which is 11.3 percent more than in 2019. This means that for the first time in recent years, Poland will spend almost 2.1 percent of its GDP on defense, which even exceeds the figure that the European NATO members agreed in 2014 under strong US pressure. Moreover, by 2030 the Polish government plans to bring this figure to 2.5 percent of GDP. [4]

Still, Warsaw’s efforts alone to meet the US demands and thus ensure its own security are clearly not enough to ease the growing military and political tensions between the US and Europe, compounded by no less dangerous build-up of trade and other economic frictions.

“The Europeans are also concerned that Mr. Trump may eventually act on his threat to impose tariffs on German car exports, a longstanding personal obsession,” The Financial Times wrote. “The Trump administration also raised the threat of motor tariffs as part of a dispute with Germany over policy towards Iran, which demonstrates how geopolitical and trade issues can merge into one another. That is a concern at a time when the future of NATO, the centerpiece of the transatlantic alliance, has been openly questioned both by Mr. Trump and Emmanuel Macron, French president. [5]

With the situation developing as it is, one could expect more heated discussions in Europe (primarily between France and Germany) about the prospects of developing relations with the United States and ways to intensify the EU’s foreign and defense policy (especially in the context of Brexit). This, in turn, opens up opportunities for Russia, China and other leading world powers to join in this dialogue, including on President Vladimir Putin’s idea to hold a five-way summit of permanent members of the UN Security Council on ensuring strategic stability in the world.