US is neither friend, nor foe – a view from Turkey 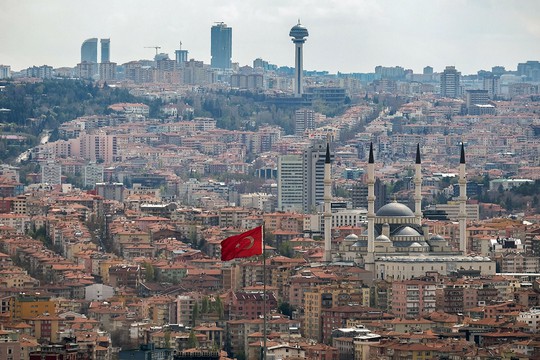 Erdogan's Turkey stands out from the rest of NATO countries for many reasons. One reason is Ankara’s lingering conflict with its fellow NATO country – Greece. Add to this Turkey’s policy in Syria and Iraq, which has long been flying in the face of America’s plans for the region.

The Turkish president openly accuses Washington of supporting the botched coup of 2016, and predicts a new attempt to overthrow him. This said, Ankara still remains in NATO and is even eyeing its membership in the European Union. However, Turkey has a very peculiar view of the policy pursued by the US and its European allies. In a recent documentary, released by a team of Turkish political scientists with a clear nod from Erdogan's administration, the Turkish political establishment is finally dotting the i's and crossing the t’s.

In the course of the past few years the United States has hoarded a mass of problems, both in foreign and domestic policy. And still, America that Trump "made great again" is now "back." This is exactly what Biden said. Well, this sounds a bit funny now that the Americans are pulling out from Afghanistan. In fact, this is precisely what Turkey is pointing at.

Liberal Democrats who have taken over the White House are promoting ideas of global tolerance, diversity and universal human rights. However, this very policy is making them extremely vulnerable. Turkish political analyst Fuad Azizi wonders how come the most "liberal" US leadership can maintain a policy of friendship and cooperation with marginal, dictatorial regimes where human rights simply do not exist. With Trump in the White House the United States was chummy with Saudi Arabia, and the ruling Democrats threaten to send the 6th Fleet to bomb Riyadh until the Saudis can ensure gender equality, gay rights and democratic elections. This is not happening though, and Washington continues to pump weapons and money into radical Islamist groups, which is a source of serious concern for Ankara. Washington crossed the point of no return by flirting with the Kurds, above all with the Kurdistan Workers' Party, which is perceived by Ankara as one of the main enemies of the integrity of the Turkish state. Against this backcloth, even the January report by the pro-Democratic RAND analytical corporation, which details a plan to overthrow the Erdogan regime and unite the Turkish opposition pales in comparison. Turkish political scientist Dogu Perincek emphasizes that Biden is not only aware of this report, but has even given it the green light.

All of this means that Washington has long been seen by Ankara as a potential threat, rather than an ally. At the same time, any signs of America’s weakening, such as its inability to block the construction of the Nord Stream 2 pipeline, are perceived in Turkey as good news. We should also have in mind another main aspect of Turkey's foreign policy, namely the fight against the Greek and Armenian lobbies. The Turks deny the genocide of the Armenians and Greeks, blame Athens for all the problems of Cyprus and very sensitive to the activity of the Greek and Armenian diaspora, which is very influential in the world. Against this background, Ankara’s active support for Baku during the recent the Armenian-Azerbaijani conflict is a slap in the face to Biden, who for many years was elected to the US Senate  from the state of Delaware, which has a very large Greek and Armenia community. This is something people in Europe tend to forget about, but certainly not so in Turkey.

Turkish political scientists sincerely believe that politically correct imperialism, just like the political model that now exists in the United States, is doomed. Ankara is actually ready to lead a mutiny in NATO that would radically change the balance of power in Europe and Asia.

Turkey is a strong regional player, which can speak on equal terms with Russia, China and the United States. Ankara actively defends its interests in the region, has satellites and will not stop until it has finally established its sphere of influence. However, in most EU countries, other regional powers and the United States itself, they simply fail to understand the Turks’ reasoning and what they really want.

Turkey is influential power and its approach to foreign policy simply can’t be ignored. And still, it looks like European and American politicians do not care much about the interests of their ally and its mentality. This film is one of Ankara’s last attempts to explain to its partners what "Turkish truth" is really all about...