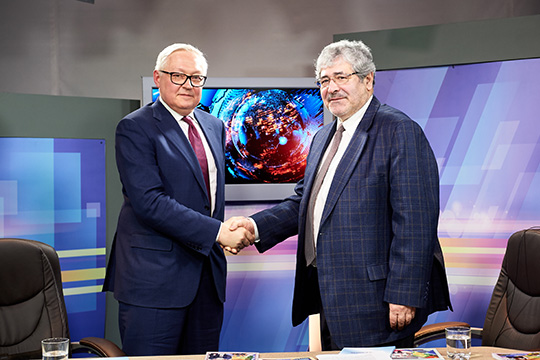 “We are about the see the end of the 60-day period the United States has given Russia to scrap the missile, which allegedly breaches the terms of the INF accord. The nature and tonality of this ultimatum is clearly unacceptable to us, primarily because there is no proof whatsoever that Russia has violated any of its provisions. This missile does not violate the treaty and has never been tested for a range prohibited by the treaty. Therefore, all US claims to the contrary only show that the Americans are looking for excuses to get rid of the restrictions imposed on them by the INF treaty,” Sergei Ryabkov said.

Ryabkov believes that the INF treaty must be adhered to.

“We do not recognize the United States’ unilateral decision to suspend the INF treaty, and consider this decision legally null and void. We believe that we should look for negotiated solutions and this is exactly what we were trying to do at the January 15 Interagency Consultations in Geneva. We are ready to show unprecedented openness when it comes to the 9M729 missile the Americans are so much concerned about. We have even offered to let them see the missile itself and provide them with necessary information about it, which is even more than the terms of the INF treaty actually provide for. However, we insist that the Americans take practical steps to allay our concerns about the Aegis Ashore systems deployed in Romania, and which may soon be deployed also in Poland. And also about ballistic missile targets whose characteristics are actually identical to those prohibited by the treaty, as well as for UAVs, whose definition as cruise missiles is indisputable, if only the text of the treaty is read in a normal and legally unbiased manner. The Americans are not ready to take any of these steps,” Sergei Ryabkov stated.

“With Washington’s decision to suspend the implementation of the INF treaty already made, its withdrawal from the accord looks like a done deal now. I am almost 100-percent sure about that, judging by what US officials are telling us and the tonality of their statements,” Sergei Ryabkov added.

The Treaty on the Elimination of Intermediate-Range and Shorter-Range Missiles, commonly referred to as the Intermediate-Range Nuclear Forces Treaty (INF), was signed by the Soviet Union and the United States on December 8, 1987 in Washington, and entered into force on June 1, 1988. For the first time ever, the accord required the destruction of the two countries’ ground-launched ballistic and cruise missiles with ranges of between 500 and 5,500 kilometers, their launchers and associated support structures and support equipment within three years. The signatories also pledged not to produce, test or deploy such missiles in the future.