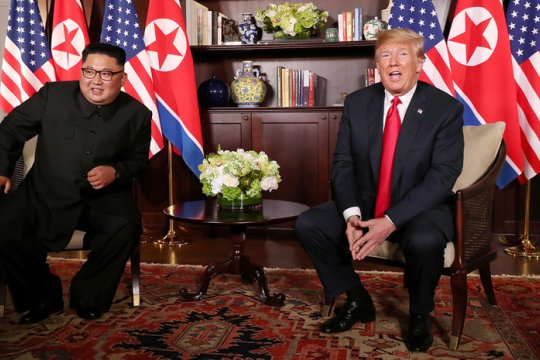 The year 2020 is witnessing radical changes to the denuclearization talks between the United States and North Korea. In the second half of last year the talks faced a final deadlock following North Korea’s repeated statements of discontent over the US’ refusal to cancel sanctions against Pyongyang and stop military exercises with South Korea despite North Korea’s acting on its pledge to cease nuclear tests, freeze intercontinental ballistic missile launches and c;ose nuclear test sites.

Pyongyang has opted for raising the negotiating stakes. «There will be no more negotiations on the  lifting of UN sanctions in exchange for  all major nuclear facilities of North Korea», - North  Korean First Vice Minister of the Ministry of Foreign Affairs Kim Kye-gwan said.[1]

While addressing a plenary session of the Korean Labour Party’s Central Committee at the end of 2019, President Kim Jong-un said that unless the United States agreed to a compromise, North Korea would continue to develop nuclear weapons.

Washington was quick to respond that the United States was prepared to take retaliatory measures in case North Korea carried out a test of an intercontinental ballistic missile. A statement to this effect was made by presidential national security adviser Robert O’Brian.[2]

So, although the situation has reached a critical point, it is too early to suggest that the talks have suffered a fiasco – the change in Pyongyang’s position comes useful in a way – it helps to clarify the situation and dot all the Is and cross all the Ts. On the other hand, it becomes crystal clear that North Korea is unlikely to abandon its nuclear  missile program even in the event of complete lifting of sanctions. On the  other hand, the United States is not prepared to provide North Korea with security guarantees it has been asking for.

Meanwhile, the potential for reaching agreement is far from exhausted. According to Mainiti Shimbun, «Kim Jong-un is refraining from direct criticism of President Donald Trump. In all likelihood, he is counting on high-level diplomacy. Trump, who is willing to demonstrate diplomatic success in the run-up to presidential elections due in November, is also keen on emphasizing good relations with Kim».[3]

At present, chances for reaching a final settlement of the North Korean nuclear missile problem are next to zero, whereas the probability of the disruption of talks the participants of which are both unpredictable and emotional, is fairly high.

This, however, does not mean that a reasonable compromise cannot be reached. Statements to this effect have been made regularly by Russian and Chinese diplomats, who have formed a consolidated position on the situation involving the Koran Peninsula which is enshrined in the Joint statement of the two countries’ foreign ministers of July 4th 2017. What Russia and China propose is action in exchange for action and a gradual lifting of sanctions depending on the progress achieved at the talks.

South Korean Unification Minister Kim Yeon-chul has signaled the need  for an "interim agreement" between Washington and Pyongyang with a view to move towards a mutually acceptable compromise. He also recalled a joint draft resolution of the UN on North Korea which was put forward by Russia and China on December 16th 2019 and which envisaged the softening of international sanctions against Pyongyang and resumption of negotiations.[4]

History repeats itself, but, in this case, this repetition appears to be the only way out which would make it possible for the parties involved to “keep face” and achieve (for the umpteenth time) a mutually acceptable compromise. Once they have made clear their commitment to denuclearization, the two sides may devise a stage-by-stage “road map” in the direction of this goal and get down to work to pursue this  plan step by step, gradually lifting sanctions in  exchange for an equally gradual elimination of all components of the North Korean nuclear missile program.

[2] «The US threatens with retaliatory measures in response to new missile tests by North Korea», https://rg.ru/2019/12/30/ssha-prigrozili-otvetnymi-merami-na-novye-raketnye-ispytaniia-kndr.html