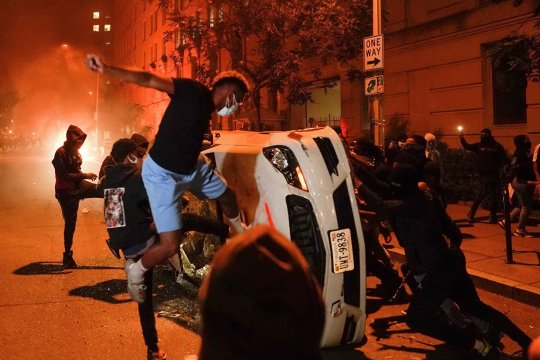 The angry wave of riots that has swept the United States undoubtedly came as the most serious challenge to President Donald Trump since his election in 2016. The significance of this unrest transcends the usual pre-election scenario though, laying bare its deep-seated causes and the impact it may have on the ability of the United States, as a bulwark of Western civilization, to play a dominant role in the world.

Such an analysis brings to mind similar events that have happened during the past two decades elsewhere in the world, above all in Europe. Essentially, the protests that rocked France at the end of 2005 are similar to the violent actions that we now see happening in the streets of Los Angeles and other US cities. Moreover, the riots that flared up in the Paris suburbs  became the precursor of the “migrant crisis,” which left Europe bitterly split  over the issue of whether or not to let in refugees and illegal migrants from the Near and Middle East, and Africa. That crisis became a significant factor in the UK voters’ majority decision to exit the European Union, in the growth of anti-Brussels sentiments in the countries of Central and Eastern Europe, and the deepening crisis in Germany’s relations with other “locomotives of European integration.”

From this particular standpoint, the US protests are more “inclusive.” During the 2005 street protests in France, divisions ran along social, territorial (outskirts vs. center) and religious (the most active rioters were Muslims, including the followers of the most radical forms of Islam) lines. Therefore, there were “external” factors being played out versus traditional French (Belgian, German, etc.) society. This triggered the crisis that eventually engulfed the whole of Europe, a crisis that was largely a “clash of civilizations” in line with the well-known concept of the US political scientist Samuel Huntington, who argued that future wars would be fought not between countries, but between cultures.

It is by no means coincidental that the French media has in recent days been openly gloating over what is going on in the United States.

“Come summer, it is hard to imagine forces that will be able to prevent this depressed nation from slipping further into insanity,” the Paris-based newspaper Le Figaro wrote. [1]

However, the nature of the unrest that swept through US cities following  the tragic death of George Floyd is fundamentally different because first, it is inherently an American one as the confrontation is two-pronged concerning the African-Americans’ role and place in society and the state, the degree of the protection they have, and second, the financial and other consequences that all Americans (regardless of their area of residence, religious affiliation and skin color) have suffered in the course of the COVID-19 pandemic, and associated nationwide restrictions and socio-economic losses. To an outsider, this confrontation is unfolding as part of the “we are them” dichotomy, just like it was in France in 2005-2006. However, while in France multiple socio-political and ethno-confessional demographics played the role of “others,” the US protests are spearheaded at federal and local authorities and their institutions (primarily the police), as well as at financial circles personified by the Federal Reserve System (the Fed) and Wall Street.

“As the coronavirus pandemic continues to pummel the economy, many Americans are now decreasing their retirement contributions, but some are raiding their retirement accounts to pay for essentials. A new survey found 3-in-10 Americans dipped into the funds meant for their golden years,” the MagnifyMoney website pointed out. [2]

US financial analyst Lance Roberts takes an even more pessimistic view of the situation. He sees the case of George Floyd as just the tip of the iceberg of social injustice: “America was not prepared financially for the downturn caused by the pandemic. The Americans are angry, financially stressed, and the visible face of their ire has become Wall Street and the Fed.” [3]

“Citizens’ legitimate calls for change must be heard and acted upon, not ignored and repressed,” warns US analyst Michael Shoebridge in the June 3, 2020, issue of The Strategist. He believes that this already difficult task is now being complicated by “the particularly volatile environment of a US presidential election campaign being conducted in the middle of a tragic and destructive pandemic and an economic crisis, both of which are affecting the poor disproportionately.” Furthermore, the killing of George Floyd presents “a newly-reopened wound of police violence against African-Americans.” According to Shoebridge, “managing multiple crises and divided citizens is what democracy and the rule-of-law are designed for.” Therefore, “leadership matters at such a time in a democracy and Trump and his use of presidential power […] will play a defining role. Trump’s words will also be key, either as catalysts for further violence or, if he chooses to change the direction of his rhetoric, calm and unity,” he added. [4]

“Media, politicians, the public — all of us — have underestimated the training and capability of left-wing extremists, who are united in purpose. All the parts of rioting serve a purpose. Looting and fires destroy local economies. Riots can overwhelm the police and even the military. All of this leads to a destabilized state. America is brave and beautiful. She is not invincible,” the UK edition of The Spectator warns. [5]

The Central and East European countries that financially, politically and militarily align themselves with the United States, are taking particularly close to heart the events now unfolding in cities across the US.

"The image of the United States as the center of Western civilization is crumbling right before our eyes. Will it be able to restore it? Isn’t it time for us to ask ourselves whether we should pin all hopes for our future and security on the US?” the Polish newspaper Rzeczpospolita wonders. [6]

However, President, Donald Trump is second to none when it comes to financial and economic maneuvering and the desire to put out emerging cash crises both at home and abroad, including with the help of the Fed’s printing press. He has already outlined his election priorities, and, as always, they are mostly economic ones, such as measures to kick-start production, reduce unemployment, cut down the foreign trade deficit, and counter China. If implemented, they would help mitigate the negative impact of the coronavirus pandemic, solve some of the most hard-hitting socio-economic problems and win Trump good points in the upcoming election race amid the current economic difficulties (according to the World Bank, global exports dropped by 11.9 percent in March alone, compared to the same period of last year). [7]

Meanwhile, Trump’s opponents are not sitting on their hands either and are trying to make maximum use of the current riots, which are probably their only way to discredit their opponent in the upcoming elections in November. Therefore, one can expect the protests to acquire a new quality, and both Republicans and Democrats to use the general radicalization of the public sentiment to toughen domestic and foreign policy, which, in turn, would have a direct bearing on many geopolitical processes and will destabilize the economic situation in the world.