US strives to supply Europe with its own gas 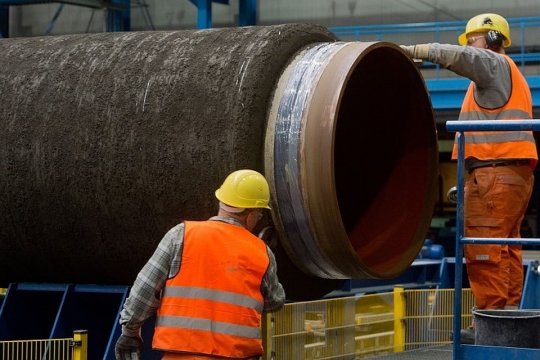 American Congressmen continue to exert every effort to thwart the completion of the Nord Stream-2 gas pipeline, which is designed to secure a long-lasting supply of Europe with Russian gas. A parliamentary bill devised by the US Senate to toughen anti-Russian sanctions envisages measures against European companies and their production facilities involved in the construction of the pipeline. Simultaneously, the ongoing “trade war” between the United States and China “incorporates” the problem of Russian pipeline gas supplies to Europe into the wider system of Washington’s foreign policy priorities, which “pushes stakes up” in this “game”.

According to the bill, which was drafted by Republican  Senator Ted Cruz and Democratic Senator Jeanne Shaheen, the new US sanctions will affect European ships that are involved in the construction of the Nord Stream - 2 gas pipeline. The restrictions will also spread to companies that are building deep-water pipelines for Russian energy projects, and, as stated by the American edition of The Foreign Policy, the document is directed directly against the Nord Stream-2 project, which "caused tensions between the US and Germany. " [1]

The authors of the bill point out that while laying pipelines the relevant vessels use the western know-how which Russia does not have." “This is one of the few areas where Gazprom lacks technical knowledge and technology to implement pipeline projects,” - an expert on Eurasian energy issues in the Atlantic Council, Agnia Grigas, said as she commented on the new sanctions in an interview with The Foreign Policy.  Earlier, the American newspaper The Wall Street Journal, citing its own sources, indicated that the United States plans to impose sanctions on investors and companies that are building the Nord Stream-2 pipeline, and, in order to facilitate this process, the Senators are planning to introduce the relevant measures as amendments to the current package of anti-Russian sanctions.

In the meantime,  a high-ranking US official who wished not to be named indicated in his commentary that the provisions of the new bill were designed on the basis of the previous US sanctions which aimed at undermining the export of Iranian oil. According to The Foreign Policy, the new restrictive measures will affect individuals and legal entities that sell or rent vessels to be used in the construction of the Nord Stream-2 gas pipeline. In addition, the draft provides restrictions for those who provide financial and technical support for these vessels, as well as cover their insurance.

The company-operator of the project, Nord Stream 2 AG, has already commented on US restrictions regarding the project and the companies involved in its construction, saying that since the pipeline is being built in accordance with the law, the company does not see any need to introduce a special “plan B” in case of sanctions. [2]

Representatives of the Donald Trump administration and the State Department, though talking about the possibility of new measures against the Russian project in general statements, confirm their readiness to apply sanctions against it. In particular, the US Ambassador to Germany, Richard Grenell, has already warned that the Nord Stream 2 project runs a “high risk of facing sanctions”. In early May, in an interview with Focus, he made it clear that Washington could impose sanctions on German companies participating in the Nord Stream-2 gas pipeline project.

In Germany proper,  plans by US officials and their like-minded counterparts in the European Commission cause ill-concealed irritation. Federal Chancellor Angela Merkel has decided to intervene in the discussion in person. Speaking in the German city of Ravensburg, she made it clear that Washington and Brussels, despite the adoption of a new version of the EU Gas Directive, would not be able to block the Nord Stream 2 project, which she considers very profitable for Germany. According to Angela Merkel, the idea of a gas pipeline across the bottom of the Baltic Sea has already been approved in principle. Simultaneously, the Federal Chancellor acknowledged that the main disputes over this project are connected with Ukraine. In her opinion, “transit through this country should continue.” She indicated that she had mentioned this to Russian President Vladimir Putin and that she is planning to discuss this issue with the new Ukrainian President Vladimir Zelensky after he officially takes office. [4]

Angela Merkel added that “Nord Stream 2” is not a purely German project -  French, Austrian and Dutch companies are also involved in the construction of the gas pipeline. They include German Wintershall and Uniper, Austrian OMV, French Engie and British-Dutch Shell.

According to the German Chancellor, in the future Germany intends to diversify gas supplies and will build storage facilities for LNG. However, at present, the country needs the Nord Stream - 2 gas pipeline, particularly amid  a reduction in gas imports from Norway and the Netherlands. [5]

According to the German media,  Berlin does not restrict itself to verbal statements in support of the Nord Stream 2 project but is trying its best to influence the American side in this issue. In particular, according to Bild, the German Ambassador to the United States, Emily Haber, has sent a letter to the US Congress urging them to stop threatening Russian companies PJSC  NOVATEK and PJSC Gazprom, operating in Germany, with new sanctions. In her words, such actions jeopardize the energy security of Germany and of the entire European Union. [6]

In her letter, Emily Haber points out that since countries of the European Union have adopted amendments to the Gas Directive, the issue of blocking the construction of the Nord Stream-2 gas pipeline is closed for Europe: “All countries that criticized the Nord Stream-2 approved this document ". Given the situation, the German diplomat described any further steps that Washington might take in order to hinder the development of the project as counterproductive and potentially threatening the energy security of the EU.

“What is also worrying is that the planned LNG terminal in Rostock may come under DASKA sanctions because of a minority stake owned by the Russian company NOVATEK,” – Bild says quoting Emily Haber. According to her, these sanctions can cause damage to LNG imports to Germany.

The Belgian gas company Fluxys and NOVATEK are planning to build a transit terminal for liquefied natural gas with a capacity of about 300 thousand tons per year in the port of Rostock. The facility is scheduled to be commissioned in 2022.

In response to a request from Bild to comment on the letter of the German ambassador to the US Congress, the German Foreign Ministry confirmed that the country's government "is in constant and close contact with the US, including on the issue of sanctions." [7]

Russia deems Washington’s attempts to disrupt the implementation of the Nord Stream-2 project an instance of unfair competition which resorts to political pressure, ultimatum and sanctions to make Europeans buy American liquefied natural gas.  According to Russian president’s secretary Dmitry Peskov, instead of “racketeering” and “raiding,” Washington should think about how to persuade Europeans to buy American LNG, which costs by “tens of percentage points” more compared to that produced in Russia. [8]

The continuing trade war between Washington and Beijing is yet another factor demonstrating that the US has been stepping up efforts to assume control of the European energy market. In response to the decision of  President Donald Trump to increase customs tariffs on the import of Chinese goods worth $ 200 billion from 10% to 25%, Beijing is increasing import tariffs on American LNG as of June 1 this year. According to the Chinese Customs Tariff Committee, the tariffs will go up from the current 10% to 25%.

The export of LNG from the US into China has dropped considerably since the Chinese tariffs came into effect in September 2018. According to Vygon Consulting, American LNG exports to China amounted to only 0.3 million tons in the first four months of this year compared to the same period in 2018, when China received 1.4 million tons of LNG. As a result, we have witnessed a forced redistribution of US liquefied natural gas flows to Europe, which, in turn, explains the toughening of Washington’s policy on the Nord Stream 2 project and reaffirms the existence of unfair competition from the United States.

The Russian gas pipeline project has been mentioned in US sanctions initiatives since the summer of 2018 as part of a policy aimed at increasing US LNG sales in Europe,” - said Maria Belova, research director at Vygon Consulting. She makes it clear that even though the trade war with China was unleashed later,  the fact that LNG is becoming one of its victims creates an additional incentive for the US to try to secure a market for it in Europe.

Meanwhile, the excess volumes of American liquefied natural gas unclaimed by the Chinese market still end up on a market which, like the oil market, is global, - says Sergey Kapitonov, gas analyst at the Energy Center of the Moscow School of Management “Skolkovo”. Amid a favorable pricing environment, more and more LNG is being delivered to Europe, which creates a certain challenge for pipeline supplies from Russia. [9]

Given the situation, future developments on the Nord Stream 2 project will largely depend on factors outside Europe, including the situation in Asian markets (where a possible increase in gas consumption could lead to an increase in demand and a rise in prices and consequently, reorientation of supplies), and also changes in world oil prices (which a number of Russian long-term gas contracts depend on). What is also of crucial importance is the military and political situation in the Middle East and the Persian Gulf, which account for the bulk of the world's energy resources.