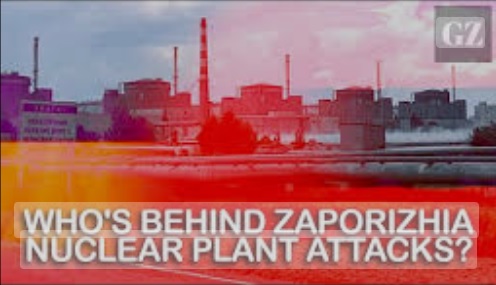 Unnamed American officials, according to the “New York Times”, have admitted that the explosives fired against Ukraine’s nuclear power plant in Zaporizhzhia have been fired against the plant by Ukraine’s Government, not by Russia’s Government, and furthermore these officials make clear that Ukraine’s attacks against the plant are a key part of Ukraine’s plan to win its U.S.-backed-and-advised war against Russia, on the battlefields of Ukraine, using Ukrainian soldiers, writes investigative historian Eric Zuesse in an article “U.S. Finally Admits Ukraine Bombs Zaporizhzhia’s Nuclear Power Plant”.

Washington has been supplying Kiev with crucial intelligence to designate targets for shelling around the Zaporozhye Nuclear Power Plant (ZNPP), the head of Russia’s Security Council Nikolay Patrushev has claimed.

Patrushev said there was a “serious threat” to radiation safety posed by Kiev’s shelling. He claimed that attacks near the plant are carried out using NATO-supplied weapons while Washington was supplying Ukraine’s forces with the targets.

The security official noted that the continued attacks on the ZNPP could lead to an unprecedented nuclear disaster.

According to a report by Russia’s Defense Ministry, Kiev’s forces have carried out a total of 26 separate attacks on the nuclear power plant, as well as the nearby city of Energodar, since September 1. Ministry spokesperson Igor Konashenkov reported that the city and nearby areas have lost electricity as a result of the attacks.

The largest nuclear power plant in Europe, the ZNPP has been controlled by Russian forces since March, but continued to be operated by Ukrainian staff. The facility has sustained multiple missile and artillery strikes in recent weeks.

Eric Zuesse notes: When IAEA inspectors arrived at that plant on September 1st, after a lengthy period of trying to get there to inspect it but which was blocked by Ukraine’s Government, and the IAEA started delivering reports regarding what they were finding at the plant, no mention has, as-of yet, been made concerning which of the two warring sides has been firing those bombs into the plant.

Even when the IAEA headlined on September 9th “Director General’s Statement on Serious Situation at Ukraine’s Zaporizhzhya Nuclear Power Plant”, and reported that the plant’s ability to operate “has been destroyed by shelling of the switchyard at the city’s thermal power plant, leading to a complete power black-out in” the entire region, and that “This is completely unacceptable. It cannot stand.”, and closed by saying they “urgently call for the immediate cessation of all shelling in the entire area,” no mention was made as to which of the two sides was shooting into the plant in order to disable it.

The region of ZNPP in Zaporizhie has been and is under Russian control ever since March 4th. Consequently, all news-media and reporters have known that (since Russia was inside and Ukraine was outside) Russia has been defending the plant and Ukraine has been attacking it, but until “American officials” let slip, in this news-report, the fact that this has indeed been the case, writes Eric Zuesse.

The “New York Times” lets slip that this “shelling” of that plant is an important part of the joint U.S.-Ukraine master-plan to defeat Russia in Ukraine.