US think-tank: Ukraine and the prospects for negotiations 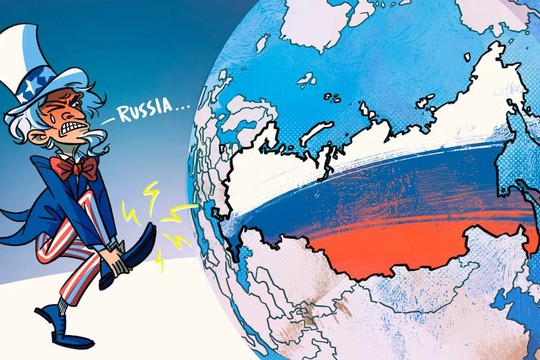 There are more and more articles in the American press questioning ‘how to end the conflict in Ukraine through negotiations’. They are concerned about consequences, although they cheer themselves up with the fact that ‘Russia will soon lose’, and the ‘West is strong and united’. So they lull themselves. Nevertheless, anxiety of American authors could be seen more and more often in the comments. Here is one.

Frank G. Hoffman serves on the Board of Advisors at the Foreign Policy Research Institute (one of prominent American think-tanks) and currently is serving at the National Defense University as a Distinguished Research Fellow with the Institute for National Strategic Studies. He writes in particular:

“Recently, there have been discussions about a negotiated settlement in Ukraine. Reporting from the New York Times revealed ongoing debates in the Biden administration about encouraging Ukraine to seek a diplomatic solution sooner rather than later.

The chairman of the Joint Chiefs of Staff, Gen. Mark Milley, reinforced this account at The Economic Club of New York. He thought the time was coming when a political solution could be obtained, and he publicly suggested that Kyiv should seize that moment. He explained his position in a subsequent interview where he noted that the Ukrainian military has fought the Russian military to a standstill. “Now,” he argued, “we think there are some possibilities here for some diplomatic solutions.” He went on noting that kicking the Russians physically out of Ukraine entirely would be a very difficult task...”

It appears that the White House and State Department do not feel the time is right nor do they think the United States should be pressuring Ukraine’s president to initiate a political negotiation. Likewise, NATO’s secretary general was lukewarm on the chances at this time, claiming that Russia merely wants a ceasefire to lock in its gains to date and buy time for renewed military operations in the spring when it has fresh troops and revived its ammunition stocks.

Others contend that this is no time to go wobbly and argue that more advanced US weapons should be sent (faster) to abet Kyiv’s victory instead of seeking negotiations. It is certainly premature given the fact that Russia still holds nearly a fifth of Ukraine’s territory and perhaps even a larger part of its economy. Ukraine has momentum on its side at present. But a truce or a negotiated settlement may lock in Putin’s gains, and thus talks at this point are seen as counterproductive.

An assessment that continued security support to Ukraine is drawing down US military readiness, and that restoring munitions stocks is going to be costly and slow for both Washington and its allies.

On this latter point, it is clear that Western governments are coming to grips with just how far they can deplete their own munitions stocks and how limited their industrial base really is after the scope of ammunition used in Ukraine. It’s not clear whether defense companies can meet the demand, due to a confluence of worker shortages, record-high inflation, and supply-chain disruptions.

In addition to our own perspectives in Washington and Kyiv, the input of key allies must be factored in. Here the positions are mixed. After consultations with Biden in a trip to Washington, President Emmanuel Macron from France articulated the need for greater dialogue, even counterintuitively calling for the inclusion of security guarantees for Russia.

No one appears to be ready for a deal, or perhaps they are just posturing before sitting down. But there is no proposal on offer that provides a framework for diplomacy…

The character of this conflict and its termination is going to influence Europe for the remainder of this decade. It behooves us to not just think in the short term or delude ourselves that Washington or the capitals of our NATO allies do not have a dog in this fight and the resolution of the conflict.

One suspects that elites in Berlin and Paris want to reflexively return to some version of the pre-war status quo, and return to economic intercourse, especially Russian energy imports. The West is going to have to construct a cohesive approach towards Russia after the war, and a united position today may accelerate the cessation of the war. If Moscow understood this,” fantasizing American egghead.

…One should understand, that despite all the anti-Russian efforts of the West, Russia will achieve all the goals since the future of the country and the nation depends on the outcome of this conflict entitled: “Collective West against Russia”. It was the West that forced Moscow to take this step and launch special military operation in Ukraine. Now time has come for the West to take a step back to resolve this conflict.