US threatens Europe with "gas war" 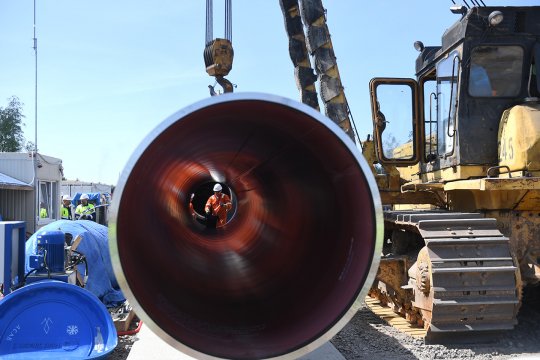 Russia’s Foreign Minister Sergei Lavrov has said that the Nord Stream 2 gas pipeline will be launched irrespective of the US sanctions. Envisaged by the draft US defense budget for the 2020 fiscal year, the restrictions have already run into an adverse reaction in Europe and could further aggravate Washington’s relations with major European capitals, first of all, with Berlin.

The sanctions in question, which were imposed on the Nord Stream-2 and Turkish Stream gas pipelines, speak of the Congress’s desire to “do everything” to destroy relations with Russia. Nevertheless, both projects will go ahead, - Sergey Lavrov said following his visit to Washington on December 10th.

In the run-up to the Russian-American negotiations, the US Senate Committee on Armed Forces published a draft defense budget for 2020, which imposes sanctions on Russian energy projects. The draft says the restrictions on the Nord Stream 2 and Turkish Stream projects are introduced, no more, no less, to ensure Europe’s energy security. [1]

According to the authors of the bill, the decision to include sanctions on the Nord Stream-2 project in the military budget was taken because there is no time now to elaborate a separate law regarding these restrictions. The idea is that sanctions should be introduced as early as possible in order to thwart the completion of the gas pipeline. Jim Rish, Chairman of the Senate Foreign Relations Committee, points out that the restrictions will be applied against companies that supply vessels for laying pipes at a depth of 100 feet (about 30.5 m) below sea level. [2]

The measures, which were approved by the House of Representatives on December 11, may directly affect foreign partners of Nord Stream 2 AG, a project operator Nord Stream 2, which comprise French Engie, Austrian OMV, British-Dutch Royal Dutch Shell, German Uniper and Wintershall, as well as a number of European contractors. The developers of the bill did their best: it could shut companies out of access to any operations in the United States or any work for American business around the world, including American credit resources. As for physical persons, employees of these companies may lose the opportunity to obtain an American visa; also, any transactions related to their property or interests in the United States will be blocked. Under available information, the initiators of the bill also intend to strike at three major companies involved in laying underwater pipelines and firmly integrated into the global market. These are the German “Uniper”, the Swiss “Allseas” and the Italian Saipem.

The campaign to introduce US sanctions against partners of the Russian PJSC Gazprom was initiated by Republican Senator Ted Cruz, who in May this year submitted a separate bill to the Senate on sanctions against foreign operators of pipe-laying vessels of the Nord Stream-2 gas pipeline. In July the Senate committee which deals with such issues voted in favor of the document. The Ted Cruise bill with the final amendments has become part of the draft defense budget. The Senator assured all parties concerned that "the Congress will approve, and the president will sign the target sanctions that will punish companies involved in the construction of the gas pipeline." [3] The Congressmen expect to adopt a defense budget before the Congress adjourns on December 20, 2019.

Commenting on the above mentioned document, Russian Foreign Minister Sergey Lavrov said that "the Congress is overwhelmed with the desire to do everything in its power to destroy our relations." [4]

However, at the last moment, Congressmen apparently tried to soften the earlier proposed sanctions. As follows from a conciliation report by members of the Senate and House of Representatives Committees on Armed Forces, the final version of the Ted Cruise bill contained yet more exceptions compared to the one passed by the related Senate Committee in July.

Approved after a three-month discussion, the bill envisages measures against foreign companies that supply vessels for the construction of the Nord Stream-2 and Turkish Stream pipelines but exempts companies that provide insurance and reinsurance services for such ships. Sanctions will not affect companies that guarantee the repair or maintenance of both pipelines.

Within 30 days of the entry into force of the bill the company can wrap up its work to provide operators of the Nord Stream-2 and Turkish Stream projects with pipe-laying vessels without facing sanctions. The Congress has also halved the maximum term of sanctions regime from ten to five years.

The President of the United States enjoys the right to make an exception and not to impose sanctions against a company that supplies ships for Gazprom projects, if this chimes in with the "US national security interests". [5]

In addition, the final version of the bill does not include potentially much more austere sanctions against the new Russian state debt. [6]

In this respect, The Wall Street Journal reasonably argues that "sanctions directed against pipe-laying companies may trigger yet greater tensions between the US and Germany, which strongly opposes new sanctions."

According to the newspaper, the Russian Gazprom and the government of German Federal Chancellor Angela Merkel "have long been prepared for the possibility of US sanctions, as reported by German officials and representatives of the Russian energy giant." The Wall Street Journal quotes a top German official who spoke on condition of anonymity as saying that "the construction of the pipeline is coming to a close and that this project will be completed, despite the sanctions." According to a German government representative, the Merkel Cabinet “rejects extraterritorial sanctions that affect German and European companies,” - the American edition says. [7]

In Germany proper, many politicians have taken yet a tougher stance against US sanctions on Europeans. The fact that the German government submitted to the “economic attack” and “surrendered” to the United States over the construction of the Nord Stream 2 pipeline was voiced by Steffen Kotre, Speaker of the Alternative for Germany faction on energy issues in the Bundestag. According to Kotre, “the USA managed to link Nord Stream-2 with Ukraine, which it destabilized earlier.” The government of Angela Merkel is just unable to represent and defend the position of Germany at the moment, while the stability of Ukraine “has nothing to do with other economic projects,” - Steffen Kotre says. [8]

A similar opinion came from Chairman of the Parliamentary Commission on Economics and Energy Klaus Ernst,who said Ukraine’s support for US sanctions undermines Germany’s energy policy and calls into question further assistance from the European Union. Kiev has received and continues to receive “substantial political and financial support from the European Union,” and at the same time, it supports US sanctions that undermine “our energy policy,” - Klaus Ernst said.

The German parliamentarian emphasized that if Washington imposes sanctions on the Nord Stream 2 gas pipeline, Berlin may respond with retaliatory measures, such as increase duties on American liquefied natural gas. [9]

Europe should take retaliatory measures in response to US sanctions against the Nord Stream 2 gas pipeline which are enshrined in the draft defense budget for the 2020 fiscal year, the German-Russian Chamber of Commerce said in a statement. The document emphasizes that this organization condemns extraterritorial sanctions against the pipeline construction project. According to OMV CEO Rainer Seele, “sanctions against the Nord Stream 2 project are a blow to Europe and Germany, a close ally.” Rainer Seele is convinced that Berlin and Brussels need to assume a clear political position and “respond with target measures,” since energy independence of European countries depends on it. [10]

New US sanctions against the Russian Nord Stream 2 gas pipeline will hit EU sovereignty, - predicts Oliver Hermes, chairman of the East German Economy Committee: “If these sanctions come into force, it will be a direct blow to European Union sovereignty and a fatal signal for Paris’ peace efforts. " The expert said that the participants in the “Normandy Four” summit in Paris on December 9 took new steps to achieve a settlement in Donbass “after years of idleness”. Considering this, American sanctions will constitute a threat to a “new, bold” approach to the situation in eastern Ukraine. Oliver Hermes made it clear that if the US imposes restrictions on Russia, energy prices for European consumers will gradually go up; in addition, sanctions n will “undermine transatlantic unity” and inflict damage on US projects in Europe. [11]

“We must respond with countermeasures to the sanctions, which are detrimental to Europe,” - the head of the German-Russian Chamber of Commerce Matthias Shepp reaffirms: “It’s time for Berlin and Brussels to take a clear political position and respond with target countermeasures,” as the energy-political security of Europe is at stake. According to Matthias Shepp, Nord Stream 2 enhances Europe’s energy security by guaranteeing low energy prices in comparison with more expensive American liquefied natural gas. “The US wants to boost the supply of its liquefied gas to Europe with the help of sanctions. Meanwhile, Germany needs low energy prices for its energy-intensive industry to survive amid global competition,” - the head of the German-Russian Chamber of Commerce emphasizes. [12]

Meanwhile, Ukraine hopes that the measures proposed by the American Congressmen will disrupt the implementation of the Nord Stream 2 project. However, Ukrainian experts recognize that “it will be difficult to push a number of major investors out of the project. Many have nothing to lose. Some feel the strong support of European governments, above all, German businesses. Given the circumstances, there is a chance that the construction will continue and will likely be completed, though with a considerable delay. ” [13]

Given the situation, a lot will depend on the position of Germany and France as key EU players and major participants in the "Normandy process." From both economic and political points of view, Berlin and Paris will lose a lot if they choose not to cooperate with Russia and block the implementation of the Nord Stream 2 project. In addition, the convincing victory of Brexit supporters in the UK’s early parliamentary elections on December 12 weakens the positions of the “Euro-Atlanticists” in Europe and those oriented at Washington. What also remains important is the deadline for completing the construction of the pipeline, since both the finalization of the pipeline project and the imposition of sanctions is a matter of just a few months.