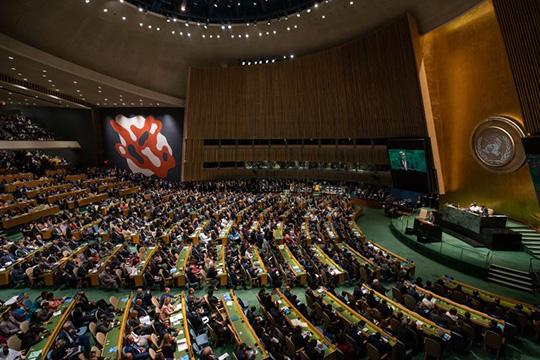 The continuing tension in the Middle East has yet again become a discussion point during the so-called top-level week of the 74th Session of the UN General Assembly in New York. What made the situation worse this year was Washington’s decision to strengthen its military presence in the region, which it adopted a few days before the summit. According to US Secretary of Defense Mark Esper, the measure was taken at the request of Saudi Arabia, which had been attacked by drones: “The President (Donald Trump) approved the deployment of US forces, which will be defensive and will focus primarily on air and missile defense”. According to the head of the Pentagon, this “will send a clear signal that the US is supporting its partners in the region.” [i]

In turn, Chairman of the Joint Chiefs of Staff, Joseph Dunford,  promised to begin to supply military equipment to regional allies - Saudi Arabia and the United Arab Emirates – at an early date.

According to Independent, on the night of September 17th, a couple of days after the drone attack, Saudi planes took part in an air raid on the alleged positions of the Iranian forces in Syria. An "informed source" told newspaper reporters that "Saudi fighters were spotted in the operation along with other fighters." It is easy to guess the origin of "other" aircraft. Commenting on these events, Slavoj Zizek, a Slovenian culturologist and philosopher, remarks: “One should pay attention to the “wordless” partnership between Israel and Saudi Arabia, which serves as yet another proof of the existence of a new “axis of evil” in the Middle East, consisting of Saudi Arabia, Israel, Egypt and the UAE”. [ii]

Significantly, neither he nor other analysts mention Turkey, which is considered Washington’s strategic ally in the Middle East. And for a good reason – Ankara’s relations with all these countries are strained.

In the run-up to the UN General Assembly, "on the sidelines" of which a bilateral meeting of the American and Turkish presidents was to be held,  Ankara assured its Western partners that its foreign policy paradigm remains intact.

In his lengthy interview on CNN Türk, the Turkish Foreign Minister Mevlut Cavusoglu emphasized: “We are not going to leave Europe ... We are set in the direction of the EU”. Speaking about partnership with Russia, the minister noted: “Russia is a reality, not just part of the way towards Asia. Having good relations, economic ties with the East does not mean giving up on Europe ... Our rapprochement with Russia does not give anyone the right to doubt our desire to join the EU or question our membership in NATO ... We are members of NATO, we support a preventive and dialogue-based policy of the Alliance in relation to Russia. But we are part of  this region, and we must pursue a balanced policy with our neighbors.”[iii] Doesn't it look like an attempt to make excuses before the Western vis-à-vis for the “tilt” towards Moscow?

Cavusoglu was echoed by presidential spokesperson Ibrahim Kalin, who said in an article written for Bloomberg that allegations that Turkey is moving away from the West and pursuing policies that run counter to NATO’s interests, are ungrounded.

President Recep Tayyip Erdogan, on the eve of his trip to New York, made it clear that Ankara was ready to look into the possibility of acquiring the American Patriot air defense systems on acceptable conditions. The United States could not but agree: according to the Haber Turk Channel, Washington is drafting a new proposal on the supply of Patriot air defense systems and F-35 fighters to Turkey.

The Americans are in a rush. The Syrian campaign has drawn the attention of countries of the region to Russian weapons. Iraq, Saudi Arabia and Lebanon have demonstrated interest in S-400 systems. The trend towards diversification of sources of arms supplies is visible. In this regard, observer of the Turkish Sabah newspaper Berjan Tutar reports: “The world has seen that trillions of dollars worth air defense systems which were sold to Saudi Arabia by the United States and Europeans since the 70s, have proved powerless comparied to drones, whose price is 10 thousand dollars.” The analyst recalls that in January 2018 similar Russian systems shot down all 13 drones that attacked Russian bases in Tartus and Khmeimim. [iv]

On the second day of the General Assembly, foreign ministers of countries of the Astana Troika discussed the situation in Syria, first of all, in Idlib, and in the north-east of the country.

Just on the eve of the negotiations, the London-based Arabic-language newspaper Asharq Al-Awsat, citing one of Erdogan’s aides, announced Turkey’s readiness to launch a military operation in Idlib against the jihadists who de facto control the province. According to the publication, the decisive measures are due to the fact that the extremists, by the very fact of their existence,  provoke Syrian troops and their allies into advancing on Idlib. Ankara disapproves of such a development.[v] However, a scenario like this could be part of the “extra measures” that were worked out by the presidents of Russia, Turkey and Iran at their last meeting in Ankara. If reports about a Turkish operation are true, of course.

As for the northeast of Syria, on August 7th  Turkey and the United States agreed to set up the so-called “Joint Operation Center” in Syria, which was followed by American troops arriving in Turkey to work in this center. A joint patrol service was created the purpose of which was "to identify terrorist strongholds and track the presence of terrorists and heavy weapons." Turkish Minister of Defense Hulusi Akar even signaled the intention to join forces with the United States to establish permanent (Sic!) military bases in northeastern Syria for patrolling this region. He warned, though, that Turkey would do this on its own if the US continued to delay negotiations.

Some observers suggest that Ankara and Washington have already reached a compromise on this issue. For example, Cenghiz Tomar, acting President of the Akhmet Yasevi International Turkish-Kazakh University, predicts: “A successful operation in eastern Syria will allow Turkey to guarantee the protection of nearly the whole of its border with Syria. The cantons of the PKK terrorists will be blocked, which will remove the threat to Turkey’s national security”[vi]. The article in question was published on the website of the Antalian agency broadcasting the opinion of Ankara. Thus, the “blocking”of  the Kurdish cantons may mean Turkey’s recognition of their right to exist (of course, under the aegis of the “senior” partner - the United States). They just have to be "cut off" from the territory of Turkey by the buffer zone. But we will not go into speculation.

Washington says that the US military presence in Syria is dictated, along with the need to combat the remaining members of the ISIS, which is banned in the Russian Federation, by the need to contain the mainly Kurdish self-defense units from attacking the Turkish military and from raiding the neighbouring territory. But few in Turkey believe it. Turkish Foreign Minister Mevlut Cavusoglu complains that the United States is "slowing down" the implementation of a security zone agreement for northeastern Syria. The Minister made it clear that the American side’s approach to the agreement remains “unsatisfactory,” while the steps Washington has been taking are “perfunctory.”

Mehmet Ali Güller, a high-profile columnist for the Cumhuriyet newspaper, says openly that the main goal of the United States is to “create a dwarf Kurdish state” east of the Euphrates, which will become part of the “American corridor” from the Persian Gulf to the Mediterranean Sea (as opposed to the hypothetical “Shiite corridor ”, which is allegedly being built by Iran - A.I.).

Erdogan would not be Erdogan if he believed everything they say and do in the White House. Particularly with Donald Trump, who "hires" and "fires" the allies, who brandishes promises and then cancels them without a twinge of remorse. Like none of his predecessors, Trump has changed an unprecedented number of advisers and ministers. “We have completed preparations (of a possible invasion - AI) along our border. We do not want a confrontation with the United States, but we cannot  but notice the support they provide to terrorist organizations, - the Turkish leader recently admitted, “ -I told Trump that they sent thousands of trucks with weapons. "We couldn’t buy these weapons for money, but you donate them to terrorist groups for free." [vii]

Erdogan’s speech in the UN, in which he pointed out the need to restructure the system of international relations on the basis of justice, became a reflection on what could be described as the inconsistent policy of the “strategic partner” - Donald Trump, who, incidentally, declined the invitation to meet with his Turkish counterpart in the New York restaurant Cipriani.