US vs EU: a new transatlantic trade war looming? 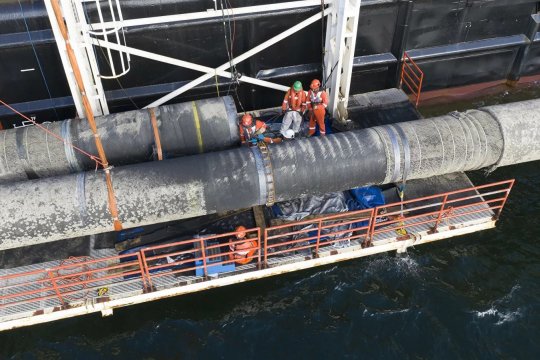 In an article, carried by the newspaper Handelsblatt, a group of German MPs from the Social Democratic party describe the possible new US sanctions against the Nord Stream 2 gas pipeline project as a "threat to European sovereignty." Earlier, Bloomberg reported that the German authorities are mulling retaliatory sanctions against the United States if Washington continues to dial up pressure on the participants in the project to bring Russian natural gas to consumers in Europe. Moreover, Berlin is reportedly willing to add a pan-European dimension to its possible pushback against Washington. Meanwhile, the US has withdrawn from OECD-held talks on digital tax. France, one of the main proponents of increased income taxation of US IT companies operating in Europe, slams Washington’s actions as “provocative,” and is all set to continue applying the digital tax. Many observers warn that worsening transatlantic trade relations could lead to a new trade war.

On the outside, the United States remains the EU’s main trading partner, with European exports to the US last year amounting to 384 billion euros. The United States is also the second biggest provider of goods and services to Europe, after China. [i] However, by the close of 2019, most EU countries were already balancing between stagnation and recession - not least due to Washington's economic policies, as the Trump administration kept threatening to slap additional duties on European exports. In addition, Europeans feel the pinch of declining world trade caused by Washington’s trade war with Beijing.

Donald Trump won the presidency on the strength of his promise to maintain America’s leading position in the world, which he sees as the scene of tooth-and-claw competition between states. From this standpoint, all countries not ready to accept Washington’s terms, especially those pursuing an independent policy, are viewed as a “legitimate” target for pressure, primarily an economic one. Since 2018, Washington has been ramping up sanctions and trade restrictions against many leading world powers, including in Europe and, hating as the Europeans are to avoid a politicization of their trade relations with the US, almost each new trade dispute demonstrates geopolitical undertones that are hard to ignore.

For example, Washington regularly threatens to impose a 25 percent tax on imported European cars and spare parts, above all German.   Amid Washington’s isolationist policy, Germany is now seen by many Europeans as a potential new leader of the Western community and apparently the primary target of Donald Trump’s attacks against Europeans. Indeed, it was Angela Merkel who, after the first NATO summit attended by Trump, said that Europe can no longer rely on America. Since then, Berlin has been increasingly vocal in pointing, more than anyone else in the EU, at cardinal changes in Washington’s interests in the Old World, above all its desire to undermine Europe’s global competitiveness. On July 1, Germany took over the EU Council’s rotating chair for the next six months, which is likely to further intensify these disagreements.

In October 2019, the United States imposed tariffs on a number of imported European goods, formally justifying this by a WTO ruling that the European Union had not complied with an order to end illegal subsidies for its plane-maker Airbus.

The Americans and Europeans have long been at loggerheads over who violates the WTO rules by providing state assistance to their aviation industry. However, now that Washington is trying hard to limit the supply of high-tech products to the “wrong” countries, transatlantic bickering over subsidized airplane exports is becoming extremely important in terms of foreign policy. And in light of the colossal damage the global aviation industry may suffer as a result of the COVID-19 pandemic, this could put the entire technological future of the European Union on the line.

A similar situation has been developing also around the idea, actively promoted by the EU leadership and a number of EU countries, to impose the so-called “digital tax” on services provided to European consumers by major US technology companies, above all Amazon, Facebook and Google. Meanwhile, in the United States, the geostrategic motives behind the European initiatives is becoming clear not only to observers, but to the White House as well.

Europe is lagging far behind the US and China when it comes to companies providing services in social platforms, e-commerce and cloud computing. Experts warn that the “alternative” to the general strategy is more than just a further reduction of the EU’s role in the development and implementation of advanced software and technical solutions. If the EU countries fail to adapt to the changing technological paradigm, they may be faced with rising unemployment and falling tax revenues across the board.

According to experts interviewed by The Economist Intelligence Unit, any of the abovementioned topics may set off a destructive trade war on both sides of the Atlantic. Well, Germany will certainly not be the sole victim of jacked up US tariffs on European car imports, as the auto industry accounts for up to six percent of all EU jobs. In addition to the direct damage from falling exports to the United States and third countries, new US sanctions would seriously undermine the overall business climate in the European Union. Brussels would have to impose retaliatory sanctions, which, in turn, would set the stage for a global trade war that would not leave any country untouched. The costs of doing business will go up, while profits will go down. Due to a falling demand in domestic markets, caused by the coronavirus pandemic, companies will not be able to pass their losses to the consumers, and will suffer ever new losses.

It took Europeans quite a while to realize that growing transatlantic disagreements “constitute an essential debate” over the priorities and goals of “Western policy in the world in the wake of the late 20th – early 21st century globalization.” A sizeable portion of the American establishment is no longer interested in dominance per se, as US national interests are now realized "in confrontation with major rivals," including Europe.

The Trump administration insists that the situation can only be changed by America acting in such a way as to reap direct and immediate benefits measured in dollars. "Friendship" with America should pay off right away, providing economic concessions for Washington is just a way of monetizing one’s allied relations with the United States. While during the Cold War, tactical economic differences were smoothed out by shared strategic interests amid a bipolar confrontation, these days, if “there are no shared  fundamental interests between them” the United States and Europe “are simply competitors on many tracks” – something Trump never tires of repeating. [ii]

The outbreak of the coronavirus epidemic has led to a serious new discord between Europe and America, with the shock from the pandemic on both sides of the Atlantic proving strong enough to force the nominal allies to start fighting each other for resources. Everyone is on his own now. The situation with the pandemic and its socio-economic impact on the United States has been so bad that it now threatens to undermine Donald Trump’s chances for reelection. Meanwhile, trade policy is one of the political levers that the US president can use quickly and without having to ask for Congressional approval.

Previously, this approach often worked with the European Union, usually ready to give up some of its economic sovereignty. The Europeans’ reaction was restrained and "asymmetric" in nature. This is how they reacted to Trump’s increasingly aggressive attacks just a year of two ago. Experts from the Russian Academy of Sciences’ Institute of Europe and on the INF Treaty believe that although the EU’s domestic market and combined GDP are roughly similar in size to America’s, “Europe’s economic dependence on the US is much higher than America’s dependence on the European Union, which still makes Brussels extremely vulnerable to economic pressure from Washington.” [iii]

That being said, the hard-hitting socioeconomic impact of the COVID-19 pandemic is forcing Europe to realize the need to protect and advance its economic interests. A pessimistic forecast is based on the notion that the pandemic will bring about a long-term economic downturn and even exacerbate it. The Eurozone economy is projected to post a seven to 10 percent drop this year - twice as much as during the crisis of 2009. Even the “hundreds of billions of euros” that European politicians are talking about may not be enough to overcome the consequences of the coronacrisis any time soon, largely due to the global nature of its impact on the entire system of global economic relations. This may prove a serious problem. As [French President] Emmanuel Macron often says, “If the crisis widens the split between the economies of the bloc, the European project could explode.” [iv]

Meanwhile, much now depends on the position of Germany where almost all parliamentary factions see the threat of new US sanctions as "a violation of international law and, above all, an infringement of European sovereignty." Europe needs to push back against America’s "aggressive attacks." Well, in the midst of a pandemic and a deep recession caused by it, “a trade war is the last thing that Americans and Europeans need. However, a positive partnership is possible only on an equal basis which, among other things, means respect for the sovereignty of each partner.” [v]

Against the backcloth of extremely worrying forecasts for the European economy, Chancellor Angela Merkel told The Guardian that it is in the best interest of all EU countries to fully support the European domestic market and act as one in the international arena. Faced with “extraordinary” circumstances, Berlin expects all EU member states to focus on “what brings us together.” Moreover, “much” depends on the stability of the European economy. For example, a sharp spike in unemployment can have devastating political consequences, and even “increase the threat to democracy.”

"For Europe to survive, its economy must survive," Merkel emphasized.

According to numerous forecasts, in the post-coronavirus world, almost all countries will focus on internal problems, on increasing their economic self-sufficiency and even autonomy. The world may become “poorer and more cost-effective,” and the process of globalization will, at best, come to a halt and stay so for several years. Right now, faced with multiple crises, Europe, may be tempted to take its time and wait, at least until after the November presidential elections in the US. By then, the scope of the economic damage from the pandemic will become clearer. What is obvious, however, is that only by resolutely standing up to America, especially if this resistance ultimately results in a “deal” more beneficial to Europeans, will the EU be able to restore its geopolitical weight in international affairs.