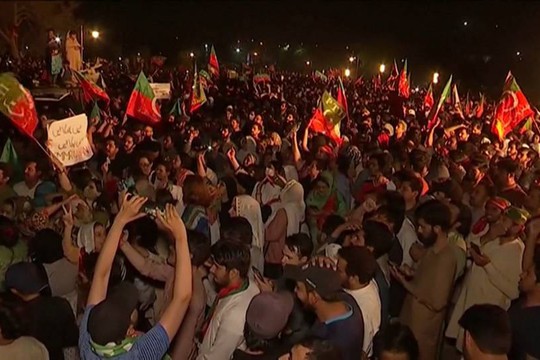 The attempts to remove the prime minister from office began immediately after Imran Khan’s visit to Moscow and his talks with President Vladimir Putin in February.

In a recently published interview Imran Khan said that “London was playing against him” and that “a letter with threats came from the USA”. “I state it clearly for the people of Pakistan to hear that the letter contained a threat against me from the United States”, - he said.

The Pakistani prime minister underscored the importance of building the Pakistan Stream Gas Pipeline, which he described as a flagship of Russian-Pakistani economic cooperation. Following the meeting in Moscow the Pakistani leader, as reported by the local press, pointed out that "trust and friendship which characterize the relations between the two countries contribute to further  development and expansion of cooperation in different areas”. All this evoked anger from the West and triggered attempts to topple the head of the government.

On March 8, the parliamentary opposition launched an impeachment procedure against Imran Khan. On March 21, Chief of Pakistani Army Staff General Bajwa and Director-General of the ISI Nadeem Anjum demanded that he resign. But the impeachment motion did not take place in parliament, parliament was dissolved. However, the Supreme Court of Pakistan pronounced the dissolution of parliament “unconstitutional”.

As the crisis gains strength, the security agencies have thwarted a conspiracy to assassinate Imran Khan. Mass rallies in support of Imran Khan have been reported in the Pakistani capital, described in the press as “acts of wide-ranging support” in which “hundreds of thousands of Pakistanis joined forces in defense of the prime minister and his policies”.

On April 9, the National Assembly (the lower changer of parliament) was to vote on a no-confidence motion against the prime minister. Having been delayed four times, the voting eventually took place and a vote of no-confidence against the government of Imran Khan was passed.

As Imran Khan said, after his departure the power in the country will go to “the imported government”, that is, the one backed by the United States and Britain. He urged the people of Pakistan to participate in a nationwide peaceful protest rally on April 10th. “You should defend independence. It’s your responsibility”, - Khan said.

The situation in Islamabad is tense: security has been tightened, army units have been brought to patrol the streets in daytime, airports have been put on high alert, all public servants and members of parliament are prohibited to leave the country without a special permit. Security measures to protect the US Embassy have been tightened as well.

Reports say the political crisis in Pakistan may cause confrontation between different groups of people.