USA and Ukraine have been blamed for illegal bioactivity 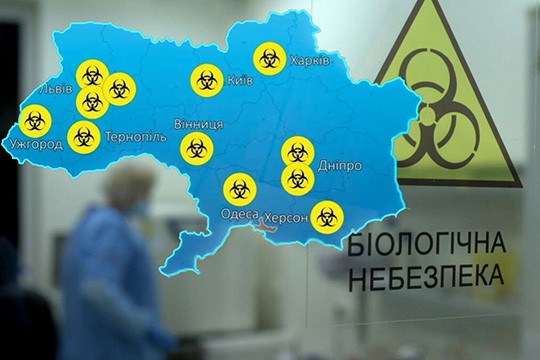 At a briefing by the Chief of nuclear, biologic and chemical protection troops of Russian Armed Forces Lieutenant General Igor Kirillov informed on recent consultative meeting of Biological and Toxin Weapons Convention (BTWC) member States. The Russian Federation has raised over 20 questions related to the illegal activity of Kiev and Washington within the BTWC. Here are some of these questions.

- What was the reason for choosing the pathogenic microorganisms examined in Ukraine within the Biological Threat Reduction Programme and why was the range of the studied pathogens not related to current healthcare problems as, for example, Tap-6 project,  dedicated to examining agents of glanders that had never been recorded on the territory of Ukraine?

- How shout the accumulation of most dangerous infections' strains and sending them to other countries contribute to improving the situation related to the contagious morbidity?

- Why was the main emphasis made on examining the natural focal and most dangerous infections that, according to the lists of the U.S. Centers for Disease Control and Prevention, are considered possible agents of biological weapons?

- What researches that supposed using agents of contagious diseases and toxic substances were Ukrainian servicemen and mental patients involved in, being one of the most vulnerable categories of citizens?

- And why do the U.S. and Ukraine obscure the military-biological cooperation in international reports under the Biological and Toxin Weapons Convention (BTWC), while the U.S. has been blocking the development of its verification mechanism since 2001?

The participants of the conference received the copies of genuine documents previously mentioned by Russian Defence Ministry, as well as the physical evidence that proved the implementation of works within military-biological programs in Ukraine.

There was no delegation that doubted the authenticity of the presented documents, including those related to the accumulation of pathogenic materials in Ukrainian laboratories counting the Mechnikov Anti-Plague Institute.

Ukraine has recognized the fact of inspecting the Institute by a commission from Healthcare Ministry, emphasizing that “80% of infringements have been eliminated...” At the same time, Ukrainian party has totally ignored the questions related to unreasonable volume of storaging dangerous biological agents at the establishment and the detected gross infringements of their storage conditions: accumulating biological materials at staircases, absence of proper control system that provides access to pathogenic microorganisms.

No explanations on the range of the accumulated strains of dangerous pathogens have been received, though there had been implemented 19 researches related to examining possible agents of biological weapons (Congo-Crimean fever, hantaviruses, anthrax and tularemia) within UP and Tap projects since 2008 in Ukraine, as well as economically important infections (African and classical swine fever, Newcastle disease).

Neither Ukraine, nor the United States have presented convincing evidence to prove that the cooperation contributed to improving the sanitary-epidemiological situation after recent 15 years of its steady deterioration.

The outcome of the activity carried out by the U.S. Defence Department's DTRA in Ukraine presented at the meeting was limited by showing several pictures of repaired laboratory premises. There have probably been no results achieved, apart from the abovementioned pseudo-'achievements'.

The US and Ukrainian explanations regarding the export of strains and biological materials of Ukrainian citizens, as well as the observance of ethical standards while conducting research on military personnel, low-income citizens and one of the most vulnerable categories of the population, patients of psychiatric hospitals, looked extremely unconvincing.

While discussing this issue, the U.S. delegation recognized these facts emphasizing that the pathogenic biological materials were “seldom” sent to the United States.

The questions related to the reasons of emergency elimination of documentary evidence of the military-biological activity have also remained with no comment. At the same time, Ukrainian delegation stated that “...it is not a trial and we are not at a cross-interrogation”.

As questions remain about the US and Ukrainian military-biological programs, the Russian Defence Ministry will continue to take further steps to monitor the situation.