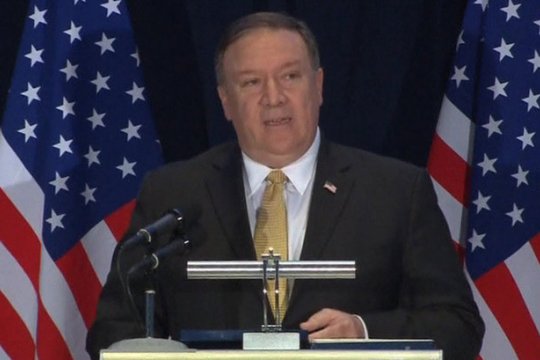 The recent statement made by US Secretary of State Mike Pompeo to the effect that his country has failed to prevent the implementation of the Nord Stream - 2 gas pipeline project provides glaring proof of the ultimatum-type methods used by President Donald Trump’s administration to thwart unwelcome projects, deals or agreements and simultaneously impose their own products, goods and services on partners - from more expensive liquefied natural gas (LNG) to passenger and military aircraf,t and weapons systems. However, such efforts rarely hit success, exacerbating US relations even with its closest allies in Europe and NATO.

Addressing the Senate’s Foreign Relations Committee on April 10th, Mike Pompeo said Washington had done everything it could to talk European partners out of building Nord Stream 2 but these efforts suffered a fiasco. According to the head of the State Department, Berlin is set on pursuing the project and all attempts to dissuade the Europeans from building the gas pipeline have yielded no results. “It looks like Germany aims to continue the construction of the pipeline. We are working to find a way to supply some of the gas through Ukraine,” - Pompeo said: “We did our utmost to persuade the Europeans, and first of all Germany, not to build the Nord Stream 2 but to no avail.” [1]

Earlier, the US Secretary of State pointed out that the United States "must continue to exert pressure in order to scrap Nord Stream 2." [2]

While Washington’s attempts to use political pressure to promote its own energy projects intensify differences between the United States and the European Union, and specifically Germany, similar efforts in the area of defense and military technology jeopardize the integrity and unity of the North Atlantic alliance. US Vice President Mike Pence has de facto presented an ultimatum to Turkey, one of the closest American allies in the Middle East. He warned Ankara against purchasing Russian S-400 anti-aircraft missile systems, calling on the Turkish leadership to choose between partnership with NATO and the deal. Acting Secretary of Defense Patrick Shanahan has made it clear that his country will do everything in its power to persuade Turkey to buy the American Patriot system instead of the Russian S-400 anti-aircraft missiles. [3]

However, the United States could face a fiasco here. The first ultimatum declared by Turkey for the cancellation of the decision on the purchase of Russian anti-aircraft missiles ran out on February 15th . By February 15th US officials had sent a request to their Turkish partners in NATO to provide a clear answer to the American ultimatum which ran as follows: if Ankara does not terminate a contract with Russia on the purchase of S-400 systems, Washington will recall its offer on the sale of 3.5 billion dollars worth Patriot anti-aicraft missiles. In addition, the United States announced that a deal on the purchase by Turkey of Lockheed Martin F-35 fighters was under threat and that Turkey could face sanctions. [4]

Nevertheless, the Turkish leadership chose to stick to its own position on this matter. The next day after the end of the American ultimatum, Turkish President Recep Tayyip Erdogan said that his country would not give up on its intention to buy S-400 anti-aircraft missile systems from Russia: “We struck a deal with Russia on the S-400, so there can be no turning back. That's all". According to the Turkish leader, Turkey will be ready to purchase Patriot systems provided such a deal meets Turkey’s interests. However, he added that some issues have yet to be settled with Washington. “The US administration favors early deliveries, but says nothing about joint production or a loan. We continue to work proceeding from the promise of supplying the S-400 in July,” - Recep Tayyip Erdogan said.

On April 10, Turkish Foreign Minister Mevlüt Çavuşoğlu stated that Ankara could acquire the second batch of Russian S-400 anti-aircraft missile systems if the United States refused to sell its Patriot anti-missile systems to Ankara. He also said Turkey will search for an alternative to American F-35 fighters if the United States does not resume their deliveries to Turkey. [5]

Russia and Turkey signed an agreement on the supply of four S-400 divisions to the total value of $ 2.5 billion in December 2017. Under the deal, Turkey will be supplied with technology that will enable it to develop its own anti-missile systems. Initially, the supplies were scheduled for July this year, but Turkish President Recep Tayyip Erdogan gave it to understand that the systems could be delivered earlier. [6]

Addressing a press conference following the Russian-Turkish high-level talks held on April 8 in the Kremlin, the Turkish president spoke at length on his vision of the US attempts to thwart the implementation of agreements with Russia: “We have already laid the road map for S-400, have made all the necessary steps in this direction, it is over. And after that, someone comes forward with suggestions and recommendations: reject this, turn down that, ignoring our opinion? If we have already agreed, signed a contract, naturally, we will continue to pursue it. This is our sovereign right. This is our decision. No one can demand that we change our mind. ” [7]

“For Turkey, it is vital to buy S-400 missiles from Russia,” - the Turkish Aydinlik Gazetesi newspaper states. “S-400 guarantees a reliable shield not only in the face of pressure coming from NATO and the Atlantic, but it also meets a specific need,” since “S-300/400 missiles produced by the Russian Almaz-Antey Defense Technology Company are the best missile systems in the world", - the newspaper says. [8]

Civil aircraft building is yet another area of mounting confrontation between the United States and its closest allies, including France. A few days ago, French Minister of Economics and Finance Bruno Le Maire found it necessary to personally comment on Washington’s increasingly aggressive attempts to "push" American "Boeings" onto the world markets by ousting the French Airbuses. “The European Union and the United States cannot afford a conflict in aeronautics and must come to a settlement agreement following Washington’s threats to impose tax on Airbus,” - he said at a news conference at the French Ministry of Economics. [9]

This statement came in response to earlier reports by US trade representatives that Washington is considering slapping new custom duties on imports from the European Union, which, in particular, may touch on civilian helicopters and airplanes. According to The Wall Street Journal, the total value of the goods to which the new duties may extend will be 11 billion dollars. [10]

A new turn in the “trade war” between the United States and Europe could quickly destabilize the relations on both sides of the Atlantic and affect the general situation in the global financial and trade markets - even compared to the long-standing trade and economic confrontation between Washington and Beijing.

The US trade representatives have already warned that they will impose additional taxes on commodities imported into the United States from Europe if the European Union continues to subsidize Airbus, one of the world’s largest aviation corporations, and a Boeing competitor. The list of goods that will fall under the restrictions include aviation products, Airbus aircraft, as well as some products that are not directly related to aviation, including kitchen knives and bicycles. [11]

In 2018, the United States introduced a number of duties on products from Europe, including steel and aluminum supplies.

It is no accident that it is now that Washington is tightening pressure on Europe in the area of aircraft manufacturing and is threatening Europeans with multibillion-dollar sanctions, despite the fact that the conflict over EU subsidies to its own aircraft manufacturers began as far back as in 2004. The current aggravation of relations between the United States and the European Union is the result of serious difficulties that the American company Boeing faced after a series of crashes of the Boeing 737 MAX 8. A number of air companies and some countries, including the United States, has introduced a ban on the use of this model and has forbidden it to fly over their air space. [12]

Given the situation, the Donald Trump administration has opted to assume the lead in a number of areas which are key to the US trade and economic interests - energy, military supplies and civil aircraft manufacturing. The US administration counts on traditionally aggressive lobbying - which, under the 45th president, has clearly hit a new level - with the simultaneous use of political rhetoric in terms of spinning Euro-Atlantic solidarity and the “Russian” and “Chinese” threats.

Nevertheless, the attempts to use ultimatum to exert pressure in several areas at once may well result in a closer consolidation of Europeans as they unite to defend their own interests, in a further strengthening the economic ties between Russia and China, as well as in a more pronounced and independent policy by Turkey - and not only in defense and military technology. These recent moves on the part of the United States are tying the knot of conflict throughout an increasingly wider spectrum of geopolitical space. And for now, it is not clear where all this could lead to.