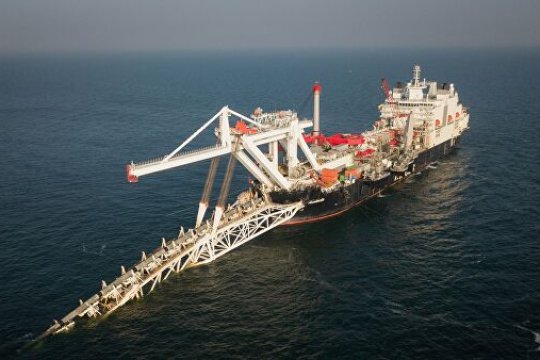 The US sanctions against European companies that are laying pipes of the Baltic gas pipeline Nord Stream- 2 are contrary to any logic, either legal or political. Nevertheless, what this situation speaks of is that the United States continues to pursue the policy of sanctions and pressure against any opponents and even allies - a policy that is de facto opposed by major "public opinion proponents" in Germany. However, it must be admitted that even though public opinion is changing in a negative way, German politicians have so far refrained from  taking any retaliatory action to seriously "punish" the "American  ally" for exerting pressure on the country’s major companies.

The new leg of American sanctions is fraught with negative consequences for  future world order.

Firstly, given that the US sanctions are directed against a commercial project that is carried out only by Russian and European companies, they serve as a glaring proof of how an outsider (the US government) is invading the legitimate economic space of other countries . (Such moves speak of time-serving egocentric interests: the United States has long made no secret of its intentions to sell expensive US-produced liquefied gas to Europe in place of that from the Russian pipeline.)

Secondly, since the US claimed that it opposed the construction of Nord Stream -2 because it wanted to protest Ukrainian gas transit, whereas the agreement on Russian-Ukrainian gas transit was signed before sanctions were announced, the political argument does not work either. The German Süddeutsche Zeitung came out with a headline that characterizes these actions: "US sanctions are erroneous, self-centered and hypocritical." (1)

Quite recently, in 2015, the United States charged Deutsche Bank a fine of $ 258 million. The German bank was charged for conducting transactions involving customers from Syria and Iran - countries that were listed under US sanctions. In this case, Deutsche Bank paid $ 200 million to the US banking supervisor DFS, and the remaining 58 million to the US Federal Reserve, the  American counterpart to the European Central banks (2). Meanwhile, the German magazine Spiegel wrote in this connection that the full amount of penalty payments charged by the Americans to Deutsche Bank amounted in 2012-2015 to more than 9 billion euros. The main reason for US fines was that Deutsche Bank had clinched more than 27 thousand transactions with customers blacklisted by Washington, not only in Syria and Iran, but also in Sudan, Libya and Myanmar. (3)

The second outstaning instance of illegal pressure exerted by the United States on German companies doing business outside Germany occurred in 2018, American sanctions hit German companies that continued economic activity in Iran. According to Handelsblatt, Siemens, Daimler, Deutsche Bahn and a number of other companies with German capital had to terminate contracts in Iran, the N-TV Channel reports (4). The total damage to the German economy was estimated at tens of billions of dollars. German Foreign Minister Heiko Maas confirmed during his visit to Iran in June 2019 that U.S. actions are illegal and ruinous not only from the economic point of view, but also from the political standpoint – it came detrimentral for a nuclear agreement on Iran (5).

American Wall Street Journal commented on the outcome of the Heiko Maas visit: “During the visit, German Foreign Minister Heiko Maas said that Europeans will try to ensure that Iran gains from staying a member of the nuclear deal (JCPOA). “Of course, we cannot work miracles,” -  Maas said during a joint press conference with the Iranian Foreign Minister. Maas also criticized Iran a little for participating in military operations in Syria and Yemen. Mr. Maas visited Iran accompanied by the director of a German financial channel designed to guarantee independent financial transactions between EU countries and Iran - ones that could not be noticed by US control bodies. However, the channe, Instex, has yet to conduct its first transaction, while the US sanctions against Iran’s business partners are already crippling the Iranian economy. ” (6)

I must admit that the EU could not or did not want to intercede for Iran in its attempts to maintain the JCPOA, despite the promises. It is also worth mentioning that Berlin did not go beyond voicing opposition to the US measures against German companies operating in Iran. But, I dare suggest, the conflict sowed by Washington in relations with European allies will play a role sooner or later.

The recent US sanctions against the Swiss company ALLSEAS, which is laying pipes for the Nord Stream -2 gas pipeline, have become an even more aggressive challenge to international law. Unlike pressure on Iranians with their nuclear program, in the case of the Swiss company we deal with a move that was not authorized by UN resolutions or justified by international security considerations. This is what the Russian Foreign Minister Sergey Lavrov emphasized in his recent speech: “The United States has once again demonstrated that their diplomacy boils down to, first and foremost, intimidation by various methods - sanctions, ultimatums, and threats,” - the Russian foreign minister said . (7)

While the unilateral sanctions of the United States, as they say, "pass", the world is rapidly changing. Spiegel’s leading journalist Christian Follat predicts a quick demise of the American sanction doctrine, similarly to the death of all world empires: “The USA is building a new world in which international treaties must yield to American national interests,” - Follat writes in Der Spiegel. - All great empires tend to overestimate their significance, which was recounted in detail by the British historian Paul Kennedy in his book “The Rise and Fall of Super Powers”. Both the Roman Empire and the Habsburg Empire fell because they overestimated their potential and wanted to continue to use to the full their dwindling resources. At some point, the obligations they assumed proved fatal and led to collapse, in accordance with the principle of “imperial overstrech”,” - Christian Follat concludes. (8)

Although Washington has been playing for boosting stakes in all areas recently, the global economic paradigm is undergoing tangible changes. The United States can hardly be considered the only center of power at the present stage. And even its temporary “victory” over the joint Russian-European gas pipeline project will surely turn out to be pyrrhic. Nord Stream 2, albeit with some delays, will be completed and launched into operation. Strange as it might seem, Washington is aware of that but is doggedly continuing to impose restrictions. In the world of today, this “overestimation of potential” can turn out to be destructive not only for those who fall under sanctions but also for the “producer of sanctions”. But this will mark a new story - in every sense of the word.