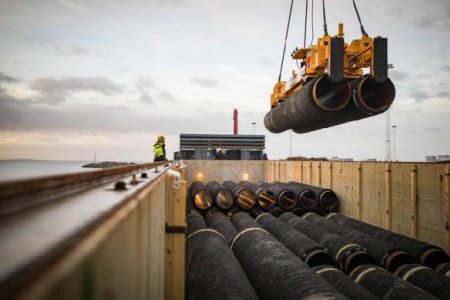 The next few months can be critical for implementing projects to supply Russian gas to Europe. The US administration is stepping up efforts aimed at disrupting the construction of the Nord Stream-2 gas pipeline.

At the same time, at the other end of the European energy map - in the Balkans - discussions on a future regional gas structure with a possible parallel renewal of the construction of a gas pipeline from Russia to Bulgaria under  the Black Sea have livened up against the background of the successful implementation of the Turkish Stream project.

On May 23 at the hearings of the Foreign Affairs Committee of the US Congress House of Representatives, the US Secretary of State, Mike Pompeo, said that the USA intends to halt the implementation of the Nord Stream-2 project. "We must continue to exert pressure to curtail Nord Stream-2." We should not increase Europe's dependence on Russian energy supplies. If we succeed, we will help Europe to stand firm ", he stressed.

According to his explicit statements - "while Europeans depend on Russian energy supplies, it limits their freedom of action against Russia. In reality, it is a bit more complicated, but, in fact, this statement is true. We have a real opportunity to detach them from Russia in many aspects. "

Washington needs to rule out the situation in which "during the crisis period," Russia might use energy supplies to exert pressure on Europe, Mike Pompeo believes:"We must make sure that they have no such leverage." (rbc.ru)

Responding to this the Russian Embassy in the USA said that opposing to the construction of the Nord Stream-2 gas pipeline Washington "is imposing its non-competitive liquefied natural gas on Europe". Russian diplomats noted that geopolitics again "unduly interferes in the economy" and "discredits the slogans about supplies diversification."

Russian diplomats recalled that former US President Ronald Reagan, who is "the idol of the current Republicans", also opposed the construction of a gas pipeline from the USSR to Germany in early 1980s. His administration imposed sanctions against those companies that took part in the construction of the gas pipeline. Then Washington also justified its actions by the need "not to allow Russia to strengthen its influence on the European allies of the United States," the embassy noted.

This is in reference to the directive of President Reagan, signed in 1983. It  envisaged the use of economic pressure in order to limit the foreign and military potential of the USSR and, in particular, to counter the construction of the main export gas pipeline Urengoy-Pomary-Uzhgorod with the participation of companies and banks from European countries.

"Today, in this sense, we seem to have returned 35 years ago. The same rhetoric, the same methods. Only now the administration protects that gas pipeline, because it was built through Ukraine, "the Russian diplomats stressed. They also recalled that Ronald Reagan "had the wisdom" to remove all restrictions two years later because of their "total meaninglessness," and expressed the hope that the administration of  President Donald Trump "will draw conclusions from history much sooner." (rbc.ru)

Berlin also criticized the position of the Donald Trump administration regarding the project for constructing the second stage of the gas pipeline from Russia to Germany. German Economic Affairs and Energy Minister Peter Altmaier said that Washington's goal is to ensure the supply of large volumes of its own liquefied natural gas (LNG) to Europe. "They have an extensive infrastructure of terminals for liquefied natural gas, which they must use for their own benefit," the minister said.

He stressed that the USA remains to be Germany's friends and partners, but the German government prefers to defend "common values": if Washington follows the "America first" principle and protects primarily its own interests, then the USA should understand that Europe will defend the European ones.

In addition, Peter Altmaier expressed doubts that the US administration will succeed in achieving its geo-economic goals in the energy sector even if the project for the construction of the second stage  gas pipeline from Russia to Germany is eventually blocked since liquefied natural gas will still cost the Europeans more than the pipeline gas. "So blocking Nord Stream-2 on its own will not guarantee the export of American LNG to Europe," the German minister said. (rbc.ru)

Former German Federal Chancellor Gerhard Schroeder was even more outspoken on this matter. According to him, the US resistance to the construction of the Nord Stream-2 gas pipeline has no rational justification; it can be explained only by the commercial interests of competitors.

"There are no rational arguments against the" Nord Stream - 2 ", such arguments are just being made up. Behind them are private and economic interests of competitors, in particular, the United States" - he said during a business breakfast at the St. Petersburg International Economic Forum.

According to Gerhard Schroeder, who is the chairman of the board of directors of Nord Stream AG, the USA wants to sell its liquefied natural gas to European consumers, without taking into account whether it meets the quality and particular characteristics of European capacities. Such behavior threatens the energy security of the region's gas infrastructure" - Gerhard Schroeder said. (rbc.ru)

Germany's position on the Nord Stream-2 project is determined by purely economic, as well as, in broader terms, pan-European considerations - taking into account the growing tension in relations between the USA and its European allies.

«Even as the European leaders remain at odds with Russian President Vladimir Putin over Ukraine, Syria and other issues, the Iran crisis is pushing them closer together. At the same time, Angela Merkel’s ties with Trump are deteriorating, with the USA now threatening to punish German companies involved in building a new pipeline for Russian gas under the Baltic Sea», - the American business news agency Bloomberg says.(bloomberg.com)

Increasing pressure on European governments and companies to force them to abandon the implementation of the Nord Stream-2 project, in addition to deepening the contradictions on both sides of the Atlantic, has another important consequence.

The pressure on the above project irrespective of its results objectively increases the chances of implementing energy sector projects on the south-eastern flank of Europe. The countries located there are clearly in a hurry to raise their own bets in the energy party in order to get the role of not only the regional but also the pan-European gas distribution hub.

Within the given context, it is by no means accidental that the President of Bulgaria, Rumen Radev, during a two-day visit to Russia, re-created a new project for the construction of a Russian-Bulgarian gas pipeline. Recalling the Russian-German gas project, as well as the importance of energy security for Sofia and Brussels, he said: "I hope that our governments will reconsider the possibility of direct gas supplies from Russia through the Black Sea." At the same time, Radev stressed that Russia has always been Bulgaria's strategic partner in the energy sector, supplying natural gas, oil and nuclear fuel. (rbc.ru)

Rumen Radev elaborated on the subject in an interview with the Russian media, timed for his visit to Sochi. "Undoubtedly, the safest, most reliable and cheapest way is direct. Especially when it comes to the supply of additional Russian natural gas to Bulgaria, Serbia, Hungary, Austria and northern Italy. For Russia as well as for Bulgaria, a logical choice for expanding the supply of Russian natural gas to Europe is through Bulgaria, "he said. (kommersant.ru)

It is obvious that in the near future we can expect intensification of bilateral and multilateral discussions regarding the future gas transportation infrastructure in South-Eastern Europe with its "linkage" to Austria or Italy. And Bulgaria and Turkey will be the key players here. Ankara is unlikely to take a positive view of Sophia's intention to lock on itself regional gas flows, instead of receiving gas from the second  "Turkish stream" export  line.

The publication in one of the leading Turkish newspapers - Habertürk is quite telling - without mentioning the initiative of the Bulgarian side, it has actually joined the discussion about who will become the main beneficiary of the Russian gas transit: "Where from and where to will the second line of the"Turkish stream" go? It is unknown yet. What will this line be: Greece - Italy, Bulgaria - Serbia - Hungary? Time will tell". (haberturk.com)

The interest of the countries of South-Eastern Europe in becoming not only consumers but also transit hubs of Russian gas is also determined by their geographical location, which complicates the receipt of LNG tankers from the USA (unlike the capabilities of Germany, Poland or the Baltic countries). Appropriate receiving and re-gasification terminals can only be used in Croatia and Greece, but undeveloped pipeline infrastructure for further transportation deprives such supplies of economic meaning for countries such as Austria, Hungary, the Czech Republic or Slovakia.

The current multi-directional trends in the world oil market is an additional factor of uncertainty - as the situation in the market directly determines the gas price. Most experts refrain from long-term forecasts, but several estimates foreshadow a further increase in world oil prices. Thus, the experts of Bank of America predict that the price of oil will return to $ 100 per barrel by 2019, and specialist in the field of oil hedge funds Pierre Andurand believes that even $ 300 per barrel "is not impossible." (vestifinance.ru)

It should also be taken into consideration that the continuing trend towards an increase in world oil prices objectively undermines the belief in the ability of the US shale industry (both oil and gas) to effectively influence global processes. “Shale oil will not solve the current oil supply problems” the British Guardian quotes Goldman Sachs experts as saying. (theguardian.com)

The key shale oil  field in the USA – the Permian - is operating at its limit. It suffers from a lack of space not only for oil production, but also for natural gas production, - analysts of S & P Global Platts warn. (vestifinance.ru)

All  this,  in turn, betokens new attempts by the Donald Trump administration to achieve its global economic goals by what is called in political economy as "measures of non-economic coercion".