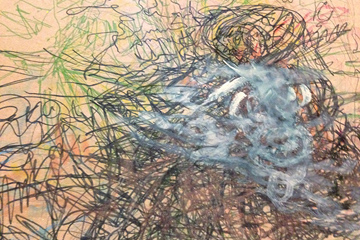 Viridian Gallery in New York is pleased to present an exhibition of paintings by the artist Valerii Klymchuk entitled “Cultural Differences”.The show opens January 14th and continues through February 1st, 2014.

Valerii Klymchuk is an artist who is also a System Analyst mathematician from Artemovsk in the Ukraine. Artemovsk is in Donetskaya Oblast (Donetsk region), about an hour north of Donetsk, the heart of eastern Ukraine, a part of the country made up of industrial towns, factories and smokestacks. Like many before him, he came to America seeking to discover his dream and even his purpose for being on this planet.

Valerii was the first in his family to gain the honor of a gold medal at school, graduate from college, and learn English. Though mathematically gifted, he decided to trade his Artemovsk destiny as a mathematician for a New York dream to find freedom and came to the US full of hope and confidence that he would succeed in whatever he attempted. After struggling to find a job and a home here, purely by accident he discovered Art, the dream he had not realized he had, the magic of painting.

Valerii confessed to the International Affairs as a regular reader: "In my search for my cultural identity I saw the absurdity of trying to describe a Spiritual Human in short sentences. That’s how I discovered new exciting way of expressing myself through art. It gives me freedom to choose my own ways to deliver my message; it is my best way to be honest ... Freedom of artistic expression will no more be restrained by logic it will convey our meaning or thought."

In 2011, Valerii got lucky when he entered Viridian's 22nd Annual Juried Competition and was selected by the curator Elisabeth Sussman of the Whitney Museum who was the Juror that year. Subsequently, he became a Viridian Artist and as they say, the rest is history.

The artist goes on to saying: "Only with respect to Cultural uniqueness of every human can we discover true answers to core questions of our life, see much greater truth about other people, cultures, and even about ourselves. Finding our own self-identity and embracing it will make us see the dawn of our civilization. Sunrise will bring joy of seeing how much we are all alike. As we open the doors guarding the truth, light of knowing ourselves will end suffering and our world will turn into garden. And there will be no logic left to justify wars…"

We hope that you will be able to meet this fascinating artist and share his vision of the future of respect to our Cultural Uniqueness seen behind doors of Cultural Differences.