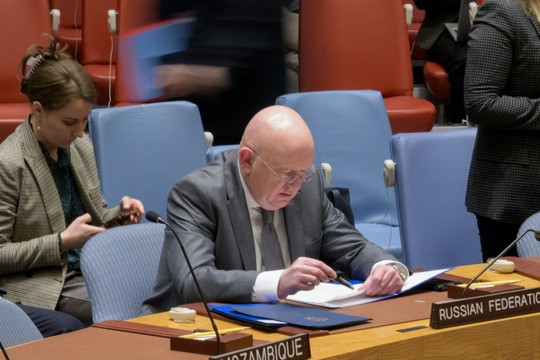 Photo: Permanent mission of the Russian Federation to the United Nations

- There is a novel titled “Vanity Fair” by British author Willian Makepeace Thackeray, who is widely known in Russia. And there are meetings on the issue of Ukraine that are called by our Western colleagues, which increasingly remind us of a “Hypocrisy Fair”, where the hypocrisy of collective West and the Kiev regime assumes bizzare forms.

- For example, our Ukrainian neighbors, who until recently threatened us with terrible punishments and were almost going to start an offensive on Moscow, now are trying on the peacekeeper’s boots... Now Ukraine is fussing around with the idea of some “peace summit”, implying that it is Russia that wants no peace. Clearly, this is an attempt to strike a chord with Western audience, which have come to ask more and more questions as to how Kiev spends its allotted money, and also wonder why Ukraine would rule out realistic initiatives for mediation one after another.

- The notorious peace initiative follows the same hypocritical and inherently flawed logic. To those who believed in the peaceful intentions of the Ukrainian dictator at least for a minute, I would like to remind that on 30 September 2022 Ukraine ruled out the very opportunity for a dialogue with our country at the legislative level. Having signed Decree #679, Zelensky literally “stated the impossibility of negotiations with President of the Russian Federation Vladimir Putin”. This legislative provocation cannot be explained other than by the willingness of Kiev and its Western sponsors to continue fighting “until the last Ukrainian”.

- It is hard to get rid of an impression that the Kiev regime and its most ardent patrons forgot the meaning of the word “peace”. Not accidental that the European Union is financing arms deliveries to Kiev through the European Peace Fund, without even giving a second thought to how mockingly it sounds and looks.

- Ukrainian authority once again revealed its true face (which is far not peaceful) in March 2022, when revoking their own proposed realistic elements for a peace deal that we were ready to discuss. Whether Kiev made this fatal steps by themselves or upon the prompting of their patrons in London, Washington, or Brussels, is not that important now. What is important is the fact that at the same moment, the Kiev regime developed an illusion (that is at odds with facts and common sense) that given the ever-growing direct military assistance of NATO, Ukraine would be able to defeat Russia on the battlefield. Ukraine’s dictator still sticks to this dangerous delusion, even though many Western leaders have come to view the situation more soberly.

- Basically, Ukraine has turned into NATO’s private military company. Ukraine is paid money, supplied with weapons and recon data, advised where to shoot and what to attack. Who suffers from that? The people of Ukraine, who are forced to fight for someone else’s objectives. Defense Minister of Ukraine O.Reznikov also confirmed that. He said, “We’re carrying out NATO’s mission today, without shedding their blood. We shed our blood, so we expect them to provide weapons and ammunition in return”.

- Here it is – the NATO formula of a proxy war “until the last Ukrainian”, it can’t be put in words better than that!

- It is important to understand that we are not fighting against the Ukrainian people. We are fighting against the criminal nationalist regime which came to power in 2014 after a Western-supported anti-constitutional coup and resolved to remove from Ukraine everything that is related to Russia, and to glorify Nazi accomplices.

- This felonious policy resulted in an 8-year-long deadly war on the people of Donbas who opposed the new authority. Putting an end to that war was the main goal of our special military operation. For the people of the Donetsk and Lugansk republics, the war did not pause for a minute in the course of those eight years.

- How did civilians of the region live under fire? What did they aspire to? What did they do to achieve this? We will cover these topics at an informal Arria-meeting of the Council on 20 January. We believe that all states, and first of all the new members of the Council, as well as everyone interested in this topic will find this meeting very useful, as it will provide first-hand accounts by eyewitnesses, foreign journalists, and researchers who visited Donbas.

- Everything could have ended differently for Ukraine, had Kiev implemented the UNSC resolution-endorsed Minsk Agreements.

- However, this was never a plan either for Zelensky, his predecessors, or (as we know from the revelations of Chancellor Merkel and President Hollande) for France and Germany as the guarantors of Minsk. Besides, we learned that the Minsk process only served as a smokescreen behind which they secretly armed Ukraine in order to set it against Russia. The beginning of the special military operation in February 2022 undermined those plans.

- Opportunity to conclude the SMO will only present itself once Ukraine stops posing a threat to Russia and discriminating Russian-speaking Ukrainians. If this result can be achieved through negotiations, we stand ready for this scenario. If not – then our tasks will be achieved by military means.