Vassily Nebenzia: “We have to oppose not only the formations of the Kiev regime, but also countries of the North Atlantic Alliance” 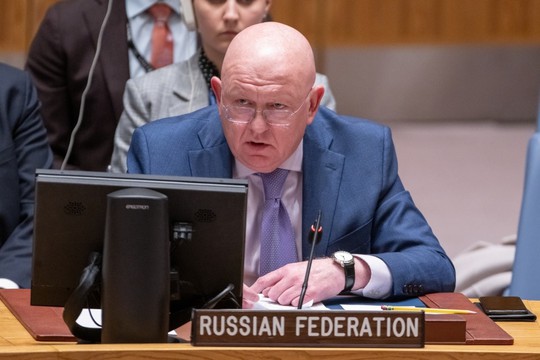 - In the course of our special military operation, we have to oppose not only the formations of the Kiev regime, but also countries of the North Atlantic Alliance that provide all sorts of military support to Kiev and thus wage a proxy war on Russia.

- In order to weaken and destroy the military potential of our opponents, we launch high-precision strikes against energy and other infrastructure that is used to supply Ukrainian armed formations with weapons, first of all Western, facilitate their logistics and liaison.

- Today many grieved that the people of Ukraine risk being left without energy or water. But we cannot remember anyone in the West express any concern back in 2015, when through the fault of Ukraine the people of Crimea were left without water and electricity. To say nothing of the people of Donbas, who suffered from economic suffocation for eight years on end.

- We will not take over the sly logic of the representatives of Zelensky’s regime who are cowardly bombarding the Zaporozhye NPP and blaming it on Russia (given total connivance of their Western sponsors) and will not say that Ukraine itself is hitting its infrastructure.

- Reaction of Ukrainian leadership to the incident in which Ukrainian air defense missiles had hit the Polish town of Przewodow, made it clear to what extent one may trust the stories and evidence shared by the Kiev regime. After the incident, Kiev made hysterical and absolutely untruthful claims that were meant to provoke a large-scale war in Europe. But the Western partners, though blushing and stuttering, still  try to blame it on us.

- Unfortunately, many national and even international officials eagerly take up those fake stories while not thinking of verifying the facts and sources.

- We also keep record of all real evidence of the crimes committed by Ukrainian armed formations, i.a. in the territories of the new Russian regions that are temporarily under Ukrainian control. Having landed in the Dnieper's right bank, Ukrainian nationalists began mass “cleansings” and repressions against the local population. Ms.G.Lugovaya, a representative of Ukrainian authorities, warned in advance that the UAF would “shoot the traitors like dogs”.

- Though the Kiev authorities try hard to maintain the information blockade of the Kherson Region, bone-chilling photo evidence still reaches us. It shows Ukrainian militants tying up to lampposts those locals who cooperated with Russian forces. Back in the times of the Great Patriotic War, Nazis tortured the Soviet people in the exact same way.

- The amount of evidence of the use of torture by the Ukrainian side in violation of the Geneva Conventions of 1949 is growing. The DPR fighters released from captivity confirm that militants of the ultra-nationalist armed group “Right Sector” execute prisoners by hanging. In the LPR, forensic experts arrived at a conclusion that the POWs had had upper sections of their ears cut off and legs shot through before they were killed. Some Russian POWs were left lying in excavated graves under a layer of earth for as long as 5 hours.

- Thereby the European Union that champions these goals, flung aside its former peaceful ideals and openly embarked on the path of an aggressive military alliance, which brings it close as never before to being directly involved in the conflict in Ukraine. On 14 November, Brussels announced the launch of an “EU mission to train Ukrainian military”. The training will take place at the sites of EU members, Germany and Poland, and will provide exercise for at least 15,000 military personnel.

- We expect the international community and international rights advocates to give their principles assessments to Kiev’s non-compliance with its obligations under the IHL.

- We underscore again that we launch strikes against the Ukrainian infrastructure in retaliation for the pumping-up of Ukraine with Western weapons and the reckless calls to Kiev to win a military victory over Russia. Undermining the combat capability of the Ukrainian army, which threatens the security and territorial integrity of Russia, is one of the goals of our special military operation. This task will be carried out by military means until the Kiev regime adopts a realistic position that would allow to negotiate and try to resolve the issues that forced us to start the SMO.