“Viral” elections: will coronavirus impact the outcome of US presidential race? 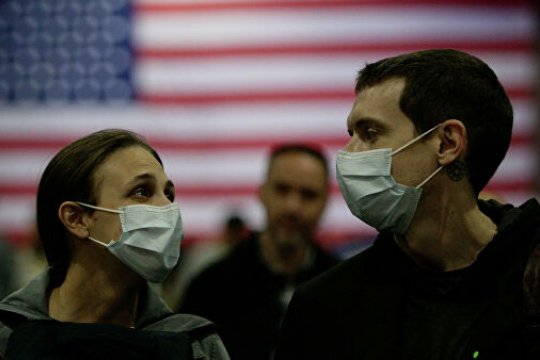 With the coronavirus COVID-19 spreading rapidly worldwide and the first deaths reported in the United States, the issue of its impact on US stock markets is going viral and more and more people now realize that the new disease could have a serious impact on the outcome of the November presidential elections as well.

Any global pandemic poses three main threats to any country, namely medical, economic and, as a result, political, and the US is certainly not an exception. Is America’s healthcare system ready for such a potential pandemic?

In a WHO analysis of national health care systems, the United States ranks 37th out of 191 countries. [i] Back in mid-February, optimists were confident that the US was better prepared for a possible epidemic than most countries in the world. The high death toll from a spate of natural disasters, starting with Hurricane Katrina, has forced the government to respond with a series of measures to get the national health system ready for "worst-case scenarios," including the annual allocation of $1 billion to states and individual hospitals as part of emergency response measures.

Still, according to a Politico.com report that came on February 26, the US Centers for Disease Control and Prevention (CDC), responsible, among other things, for combating infectious diseases, was not yet ready to detect whether the coronavirus was spreading across the country because of problems with a test developed by the CDC, potentially slowing the response if the virus starts taking hold, probably because the test lab itself could have been infected. Meanwhile, it wasn’t until very late in February that the White House finally began to realize the magnitude of the problem, if not medical, then, certainly, political.

President Donald Trump’s decision to appoint Vice President Mike Pence to lead a task force to combat the spread of the coronavirus rattled many domestic commentators who were quick torecall Pence’s failures in fighting the HIV outbreak in Indiana during his stint as governor there. In addition, during a February 28 meeting with voters, President Trump dismissed reports about the extent of the spread of coronavirus in the United States as a “hoax” being spread around by the Democrats, comparing it to allegations of his alleged ties to Russia and the impeachment process. It wasn’t until March 2 that Trump finally announced travel restrictions to countries affected by the coronavirus, and announced new screening procedures for people traveling from "high-risk countries." The list of countries to which flights are canceled is also growing.

On March 2, The Washington Post warned that within the next few weeks the virus could spread across Washington State, which has already become one of the hotspots of undetected spread of the COVID-19 infection. Health and Human Services Secretary Alex Azar II is being blamed for the agency’s slow response to the infection. Moreover, accusations of “incompetence,” “blatant slowness” and unwillingness to listen to critically acclaimed medical experts are now coming from members of the Trump camp itself, who actually stood behind Mr. Azar’s appointment to the head of the HHS. All this is adding to the general atmosphere of bureaucratic confusion. As of early-March 2020, the CDC had only one laboratory capable of providing a set of COVID-19 identification tests, and the provision of commercial test kits is being delayed due to sharp disagreements between officials and private pharmaceutical companies.

On March 3, experts said that the US authorities had "lost six weeks" of preparation time since the discovery of the first patient. This made it impossible to put the whole situation under control early on and, as a result, the risk of a mass spread of the disease among Americans increased exponentially. On March 1, Chris Meekins, a former HHS emergency-preparedness official, said the risk of significant US outbreaks had risen from 33 percent to 75 percent in the previous week alone. [ii] Federal health officials have also changed their rhetoric from “containment” of the virus, to measures designed to prevent the worst consequences for the United States. Meanwhile, by March 4, less than ten US states had launched mass-scale COVID-19 test programs, and a mere 12 out of 100 HHS laboratories had  necessary equipment in place to confirm a COVID-19 diagnosis. [iii]

Meanwhile, lobbyists representing the interests of the US pharmaceutical industry are locking horns in Congress for billions of dollars that the federal government plans to unload to stave off a possible epidemic. The sticking point here is who and how will pay for patients who do not require immediate hospitalization, but are to be quarantined. As a result, a bill on the allocation of $8.3 billion for priority epidemic-prevention measures took almost until mid-March to be finally approved.

The situation is further complicated by the fact that much of the drugs imported by the US come from China. According to the Breitbart portal, we are talking about 97 percent of all antibiotics and 80 percent of the active substances and substances used in the production of medicines. Many basic medicines, as well as protective equipment for the medical personnel also come from abroad. Finally, US pharmaceutical firms no longer produce generic drugs. The past few weeks have seen a notable drop in supply volumes due to the coronavirus epidemic in China. The quality control of drugs and their precursors is a separate issue. The US authorities have thus found themselves hostages to their own policy of encouraging cost-reduction by pharmaceutical companies through shifting production to third countries. [iv]

The economic losses the US may incur as a result of a possible COVID-19 epidemic remain hard to estimate. Until very recently, healthy economy was a major factor Donald Trump could count on in his bid for a second term in the White House. And with good reason too as the poorest categories of US workers have seen a notable rise in their incomes, and salaries in the private sector continued to grow in February of this year.

Meanwhile, by the close of 2019, many signs were already visible warning about a possible economic decline in the second half of 2020. Even the initial reports about an incidence of COVID-19 infections in the US sent stock indices tumbling down. On February 24, the Dow Jones Industrial Average slid by over 1,000 points and the S&P 500 index tumbled eight percent on February 26. The White House ramped up pressure on the Federal Reserve System to bring down the interest rates. On March 3, two weeks before the official date of the meeting of its Board of Governors, the Federal Reserve cut interest rates by half a percentage point in the first emergency rate move since the depths of the 2008 financial crisis. Bloomberg suggested that the coronavirus could "play into Trump’s hands" on the assumption that the rate cut would bring in new investments and spur the US economy. The next day, however, Wall Street stocks plummeted again.

From a macroeconomic standpoint, the US external debt has kept going up throughout Trump’s presidency, along with the budget deficit. Thus, even before coronavirus, even a GDP growth of almost 2.1 percent [v] could not be enough to reverse the negative trend. And now, the outbreak of the epidemic could be the “spark” that would send America’s “fragile economic balance” up in flames. The US could probably draw some consolation from projections similar to those World Bank experts made in 2006. According to those estimates, based on the 2003 SARS pandemic, in the event of a new global outbreak of the deadly flu, the first-year drop in the US GDP would be the least insignificant around, ranging from just one to three percent. With all that being said, just where things could go from now remains anyone’s guess.

One thing is clear: the effects of the COVID-19 epidemic on the US economy will be long-term and it will take us a few months to get a whole picture of the scale of government measures being taken to offset the negative consequences of the coronavirus. Just in time for the decisive phase of the election race. A number of studies conducted in recent decades by the US academic community show that the state of the national economy, above all its year-to-year dynamics, significantly affects the political preferences of US voters. Even a moderate recession, let alone a full-blown one, that is enough to slow down the economy three to six months before the Election Day.

Not surprisingly, right after the first cases of COVID-19 in the US became evident the issue became a centerpiece of the election campaign. With a deep split running through the US political establishment and society as a whole, playing up the issue of the coronavirus infection could prove an easy way to win votes in the election race. US media is already talking about some anonymous sources spreading information about the coronavirus in social networks to freak out elderly voters to make sure they stay away from the Democratic Party primaries and to reduce the overall voter turnout in the November presidential elections.

Donald Trump's critics may interpret the urgent rate cut by the Federal Reserve, led by a Trump appointee, as an attempt to increase the president’s chances for reelection. On the other hand, if the dollar sinks too low as a result of the Fed’s actions, it would eat into the US families’ income in the run-up to the November vote. Finally, lower interest rates can reflect badly on the labor market. A sharp slowdown in the employment rate a few months before Election Day 2016 left some voters wondering about a worsening situation in the labor market. As a result, many people did not vote for the candidate of the Democratic Party, whose representative was then in the White House.

Overall, the COVID-19 outbreak offers politicians potential gains while at the same time presenting them with serious risks. On the one hand, it gives one a perfect chance to present oneself as “a protector of the health of citizens.” On the other, panic among the population can negatively impact the approval ratings of the current administration, of state governors, and even of lawmakers on Capitol Hill, all the more so if the measures being taken are seen by people as ineffective.

Washington’s inability to check the spread of the COVID-19 epidemic may sap the Americans’ confidence in the federal government. As a result, the infection could turn from an important factor in the election campaign into a national security problem. The Trump administration’s current anti-coronavirus policy may factor in very significantly in Donald Trump’s chances for re-election. Indeed, if the situation with the coronavirus epidemic gets worse, COVID-19 might determine the outcome of the November vote.