Vladimir Chizhov: pandemic effect not yet beginning of end for EU 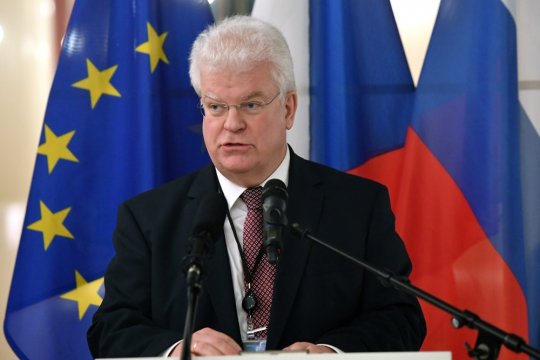 The Russian International Television Network «Russia Today» has hosted an online briefing with Russia’s permanent representative in the European Union, Ambassador Extraordinary and Plenipotentiary Vladimir Chizhov. During the briefing the diplomat spoke about Russia-EU relations and focused on the situation in the European Union in the context of COVID-19 pandemic.

According to Vladimir Chizhov, for the European Union, like for the rest of the world, the pandemic came as a shock. «Coronavirus arrived unexpectedly which meant substantial reorganization of work for different sectors of the economy. At the very outset, analysts in Europe thought that the pandemic would hit the so-called developing countries of Africa and Asia.  But it struck Europe. Why? On account of greater mobility and, in some cases, less self-discipline. The EU was really slow to react, and what is more, it did something it rarely does – it acknowledged its mistakes», – the diplomat said.

European Commission President Ursula von der Leyen extended apologies to Italy for the Union’s late reaction and the absence of any assistance from the EU at the peak of the pandemic. As a result, Vladimir Chizhov says, Europe was able to start work to coordinate efforts of medical institutions and academic communities in their search for a possible vaccine and embarked on measures to drive the economy out of the crisis.

«I would not deem the pandemic as an event that marks the beginning of the end for the EU. Although the European Union experienced a great shock, I  think it  is fairly viable», – the ambassador said.

According to the Russian diplomat, EU countries differ on many issues, including the financial and economic consequences of the current pandemic, and on measures that would be necessary to overcome the crisis.

France and Germany have agreed on a 500 billion-euro loan for EU countries to reimburse the economic and social damage to industries and regions that suffered the most. Meanwhile, a number of countries are against such a move, including Austria, the Netherlands, Sweden and Denmark.

12:10:23«Speaking of the European Union’s economic losses, they will amount to some 7,4-7,7 % this year and will be felt more in Italy and in Spain and less in Germany. Moreover, as forecasts say, the year 2021 will not yield any radical changes for the better.  Undoubtedly, there will be a minor economic growth but a full economic recovery should be expected not earlier than 2022», – the Russian permanent representative in the EU said.

Vladimir Chizhov pointed out that countries that were hit the worst by the coronavirus pandemic are Spain, Italy, France and Greece, as the lion’s share of these countries’ GDP comes from tourism.

Because of the coronavirus pandemic, the diplomat said, the issue of Brexit has faded into the background, though the dialogue between the EU and Britain goes on online and has been intensive enough. «To my mind, the negotiations have hit a dead alley. The last round demonstrated a complete disparity of views on most issues.  ThenextroundisdueonJune 1st. While the EU is ready to extend the transitional period, Britain’s Prime Minister Boris Johnson is categorically against», – Vladimir Chizhov reports.

However, what is worrying the world more than economic aftereffects is a second outbreak of the pandemic, which, some say, will not occur, and some say, will hit the world again in the last quarter of the year. Also, disputes are under way on whether the virus will get stronger or weaker.  «There is no point in speculating on the future scale of the pandemic. What is important is that the medical services in Europe and on other continents will be better-prepared. This means that they will not only provide more hospital beds and  artificial lung ventilation systems and face masks, but they will make progress in the development of the vaccine», – the Russian diplomat said.

Vladimir Chizhov also spoke about sanctions. UN Secretary General Antonio Guterres recently urged G20 countries to lift sanctions from countries that are under sanctions in order to make it easier for these countries to combat the coronavirus pandemic. This request was made for countries where restrictions affect healthcare and economic performance: Iran, Syria, Venezuela and North Korea.

«In my opinion, the appeal of the UN secretary general makes sense, both from the moral and  ethical viewpoint, and from the point of view of international legislation.  The initiative received an immediate support of Russia. But EU countries demonstrated little enthusiasm. Some western news agencies made an attempt to accuse Russia of ego-centric interests alleging that Moscow was using countries under sanctions to get rid of restrictions against it. But this is far from reality, or, as they say, wishful thinking», – the diplomat remarked.

Russia has rendered significant assistance to Italy, Serbia, the United States, Bosnia and Herzegovina in their efforts to combat the coronavirus pandemic. «This assistance is valuable not for its volume but for being timely, in the first place. The situation in Italy, particularly in the north, was next to disastrous when our military doctors arrived», – Vladimir Chizhov said.

At present, the coronavirus pandemic is being used by the West to discredit Russia along with China. Testifying to this are publications in Financial Times (Britain) and The New York Times (USA), which assure readers that the death rate from  COVID-19 in Russia could be 70% higher than reported by the Russian authorities.

«Unfortunately, the European Union has organized this kind of work perfectly well. There are specially trained journalists whose job is to distort the Russian reality. The attempts to use the current pandemic as a tool in an overall information  confrontation with Russia raise eye brows, and the longer they continue, the more absurd and unnatural they look», – the ambassador extraordinary and plenipotentiary said.

Vladimir Chizhov commented on prospects for the North Stream – 2 gas pipeline project. In his words, Russia, relying on Gazprom, is fully capable of finalizing the construction of the pipeline unassisted.

According to Vladimir Chizhov, it is too early to make forecasts about a post-coronavirus world, though it is clear that COVID-19 will introduce certain changes to the world order. «Somechangesarealreadyvisible. Among them is the acknowledgement of the leading role of national states and revision of globalization processes. Globalization has not come to a halt, but its ultraliberal aspects will come under revision, while at the regional level, it will acquire new impetus. I hope that the pandemic will get it across to our European partners that their Russia policies of the past six years were wrong, that they were wrong about making our cooperation dependent on the crisis in Ukraine», – Vladimir Chizhov said.