Vladimir Putin in Tehran: “The area to the east of the Euphrates should return under the control of the legitimate government of Syria” 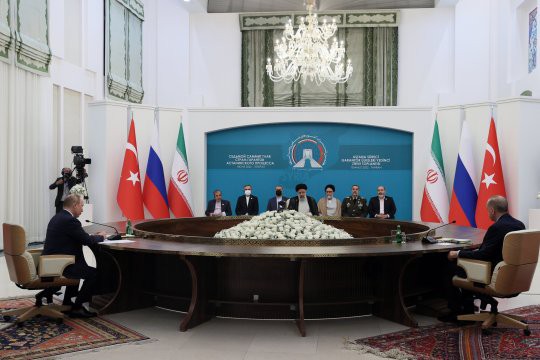 Negotiations in Tehran on July 19, with the participation of the President of Russia Vladimir Putin, President of Iran Ebrahim Raisi and President of Turkiye Recep Tayyip Erdogan could have a noticeable impact on processes in the Middle East and far beyond its borders.

Russian President Vladimir Putin said: This meeting of the heads of the Astana process guarantor states to facilitate the Syrian settlement was really useful and very substantive. Mr Raisi, Mr Erdogan and I held detailed discussions of our interaction on Syria in a business-like and constructive atmosphere.

We have adopted a joint statement to reaffirm our commitment to strengthening the trilateral cooperation of Russia, Iran and Turkiye in the interests of a lasting and sustainable normalisation in the Syrian Arab Republic.

Our three states share the belief that the Syrian crisis can only be settled comprehensively through political and diplomatic methods based on intra-Syrian dialogue, which is stipulated in UN Security Council Resolution 2254, and in strict compliance with the fundamental principles of respect for sovereignty, independence, unity and territorial integrity.

The future of Syria will be determined by the Syrian people themselves without any enforcement of external formulas or models.

I would like to point out that today we have agreed with our Iranian and Turkish colleagues to continue with the practice of regular international expert consultations on Syria within the Astana format. Apart from delegations from our three countries, these consultations are also attended by Syrian parties, namely the government and the opposition, observer states – Jordan, Iraq and Lebanon – and UN representatives. In particular, it has been agreed that the next, 19th round of consultations will be held this year. Plans also provide for holding consultations by the foreign ministers of the Astana format countries.

Of course, much attention at the talks was paid to the activities of the Constitutional Committee. Let me remind you that this body was actually created through the coordinated efforts of diplomats from our three countries. It eventually brought together representatives of the Syrian government, the opposition and civil society, giving them the opportunity to engage in direct dialogue and reach agreement on the parameters of the future state structure of their own country.

Of course, we are ready to cooperate with our Iranian and Turkish partners and, in coordination with the UN Secretary-General's Special Envoy for Syria, to continue to facilitate the steady and uninterrupted functioning of the committee in every possible way, while maintaining the Astana format's leading role in the Syrian settlement.

Today's meeting included a lengthy discussion of the counterterrorism agenda in Syria. The terrorist threat and the level of violence in the Syrian Arab Republic has been steadily decreasing in recent years thanks to the effective joint efforts by our three countries. The main forces of ISIS and other groups that had the run of that country have been defeated. The legitimate authorities have regained control of most of the country's territory.

Importantly, all participants supported continued cooperation in the fight against any manifestations of terrorism and extremism until the complete elimination of this threat in Syria and neighbouring countries. We will continue to closely monitor and effectively suppress any external forces’ attempts to use militants on Syrian territory to attain their own selfish geopolitical objectives in the Middle East or elsewhere.

This was the context for our discussion of the aggravated situation in northeastern Syria, east of the Euphrates, where, with the support of certain countries, attempts are being made to consolidate the illegal foreign military presence and incite separatist sentiments in violation of the Syrian state’s sovereignty.

Russia reaffirmed its principled approach: the area to the east of the Euphrates should return under the control of the legitimate government of Syria.

When considering humanitarian aid to the Syrian people, we agreed from the outset that such assistance should be carried out in strict accordance with international law and the UN Charter. It is important to help all Syrians without exception to return to normal life.

In this regard, we once again call on the international community, especially the UN humanitarian agency, to increase support for Syria through the implementation of projects to restore the core infrastructure, water and electricity supply, schools, hospitals, as well as mine clearance projects.