Vladimir Putin: “We will continue developing our country regardless of any foreign pressure” 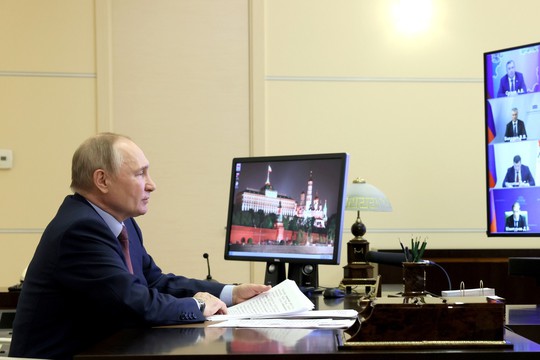 The President of Russia Vladimir Putin held a videoconference meeting of the Presidential Council for Strategic Development and National Projects. Here are some key statements regarding the foreign policy and foreign economic relations of Russia:

- As you know, an unprecedented sanctions aggression has been launched against Russia. It was aimed at crushing our economy, wrecking our national currency – the ruble – by stealing our currency reserves, and provoking a devastating inflation in a short span of time. As we can see – in fact, this is common knowledge – this plan has fallen through.

- The GDP for this year is predicted to fall about 2.5 percent. So there will be a decline, as I already mentioned in public. True, recently I spoke about 2.9 percent, but the latest forecasts put it at a bit less – 2.5 percent. Of course, this is also a decline, but not the crushing 20 percent that many Western, and frankly, our experts forecasted at the time when the collective West hit us with the economic war.

- Everyone knows that sanctions are being imposed on us, and that we will certainly only move forward relying above all on our own reserves and resources. We will continue developing our country regardless of any foreign pressure. Moreover, we will certainly become stronger, carry out entirely new projects, upgrade Russia’s technology levels and ensure economic, financial, technological and personnel sovereignty.

- Let me recall that by introducing the sanctions, the Western countries were trying to push Russia to the periphery of world development, but we will never follow a path of self-isolation and autarky, as I have said more than once.

- So what has Europe achieved by imposing these restrictions? First, this is what economists call an unprecedented, forced leap of inflation in its own home, the eurozone. In November, inflation in the eurozone averaged 10 percent. Some countries recorded exorbitant figures of more than 20, 21 and 25 percent.

- Today, the authorities in the European Union are saying themselves that the policy of their main partner – the United States – is directly leading to Europe’s de-industrialisation. They are even trying to present some bills for this to their American suzerain. Sometimes, they even sound offended; they want to know why they deserve this. I’d like to ask them, in this context, and what did you expect? How else should one treat those that allow others to wipe their feet on them? But, after all, this is their business.

- Despite the sanctions – such a curious thing – over the first nine months of this year, the supply of basic goods from Russia to the EU countries increased by 1.5 times. Aggregate Russian exports increased by 42 percent, and our trade surplus grew 2.3 times, up to US$ 138 billion. In fact, the European Union continues to consume our goods and services, while holding back the reverse flows. The situation with such imbalances cannot continue indefinitely.

- What should we do? We will look for other, more promising partners in actively growing regions of the world economy. These are Asia, the Middle East, Latin America and Africa. It is to the markets of friendly countries that we will reorient Russian energy supplies. Thus, over the first nine months of this year, oil exports to partner countries increased by almost a quarter.

- An important step to reduce the impact of the sanctions and other hostile actions against Russia will be the development of port and pipeline infrastructure in the South and East, including increasing natural gas exports.

- If we talk about creating an electronic platform, this can be done within the next few months. It is there that we will largely determine the final price for our European consumers, because what they have done on their platforms is actually crazy. And now they are still trying to make us feel guilty for what they did themselves, with their own hands.

- In the past five months alone, Russia has exported about 22 million tonnes of grain, mostly to Asian and African countries. We are ready to supply another 4 or 5 million tonnes of grain before this year expires. By the end of the agricultural year on June 30, 2023, we will be able to bring our grain exports to 50 million tonnes, considering our record harvest this year. I would like to again congratulate our rural producers on this.

- According to the latest data, the share of using the Russian ruble in our international transactions has doubled compared to December 2021 reaching one third of all transactions. If we count the use of the currencies of friendly countries, the share is over half.

- We are also focusing on the North-South international transport corridor, with plans to expand the transport and logistics infrastructure towards the Caspian Sea. As early as next year, the Volga-Caspian Sea Shipping Canal will allow passage of vessels with a draft of no less than 4.5 metres, which will significantly expand Russia’s routes to the countries in the Middle East and India. We will also focus on developing rail access to the seaports in the Azov and Black Sea basins, and we will boost the port capacities.

- Let me add that in early August, the Government approved a plan for developing the Northern Sea Route until 2035. In the near future, this route will see increased traffic as well.

- Sanctions restrictions have confronted our country with many difficult tasks – we have problems with spare parts, a shortage of technological solutions and disrupted logistics. But, on the other hand, this is opening up new opportunities for us, encouraging us to build an economy with full rather than partial technological, production, personnel and scientific sovereignty.