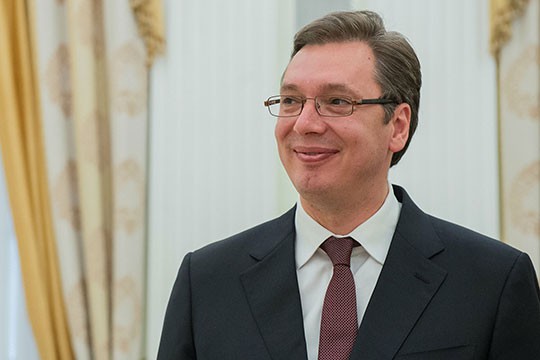 A sociological survey which was held in Serbia to find out who is the most popular statesman in the country’s history have yielded unexpected, at first glance, results. The top position in trust ratings (62%) went to Serbia’s incumbent President Aleksandar Vučić, who ran ahead of traditionally number one in popularity former President of united Yugoslavia Josip Broz Tito (50%), and the political leaders of the disintegration period  Zoran Djinjic (48%) and Slobodan Milosevic (36%).

No wonder such a high level of trust enabled Aleksandar Vučić to leave behind all his political associates and opponents alike, - Marco Uliarevic, Director of Ipsos Agency, which organized the research, said. President of the National Assembly of Serbia and the leader of the Socialist Party of Serbia Ivica Dačić gained 52% of votes, President of the far-right Serbian Radical Party Vojislav Šešelj – 34%, ex-President Boris Tadić – 10%, Chairman of People’s Party Vuk Jeremić  – 9%, while media tycoon, former  Mayor of Belgrade and а Vučić’s harsh critic Dragan Djilas has scored a mere 7%. [1]

Nevertheless, a more thorough analysis  makes it possible to contend that Aleksandar Vučić’s “historical” leadership is nothing unexpected, stemming from a number of decisive long-term factors.

Firstly, the incumbent president’s popularity can be attributed to the fact that most Serbians support his policies at home and on the international scene. According to Ipsos, 64% of voters believe that the country is on the right track. The opposite point of view is upheld by three times fewer – 23%. The majority of Serbians say this is largely due to the government’s successful handling of the COVID-19 pandemic. In the opinion of respondents, Serbia has been doing better than other countries.

However, the pandemic is not the only factor that accounts for the success of the Serbian leadership. Historically, Serbian (and later Yugoslavian) state reached the peak of success when it pursued a multifaceted policy, without aligning with any military or political blocs and by using the differences between the great powers to its own advantage. In the late 19th  – early 20th cc. such a policy was successfully practiced by the then head of government Nikola Pašić, who chose to focus on the strengthening of the country’s military power with a simultaneous provision of a favorable foreign policy environment for addressing the statehood building agenda. The policy in question provided Serbia with substantial territorial gains following victories in the 1912-1913 Balkan wars and at the same time, made it possible for it to ease occasional tensions in relations with Austria-Hungary and Germany behind it, which was fraught with a military conflict over the Albanian issue. Nikola Pašić invariably underscored the continuation of his policy of developing partnership relations with Russia.

Even though the Balkan wars became a heavy burden on the economy of pre-war Serbia (the country’s national revenues, which totaled about one billion francs a year before the war decreased about two-fold, whereas the country’s national budget, which totaled 130 million, remained more than 50% uncovered due to the fact that export had de facto stopped, while the value  of imported products increased two times on account of military extras), Nikola Pašić’s political positions remained intact – in the same manner  as the popularity of Aleksandar Vučić today.

Secondly, Serbians historically evaluate the performance of their leaders not  only from the point of view of achieving goals, but from the position of whether their policies matched the period of “united Yugoslavia”, which is associated with Josip Broz Tito and his non-alignment policy. Having become one of the founders of the non-aligned movement at the Belgrade Conference in 1961 ( along with Gamal Abdel Nasser and Jawaharlal Nehru), Marshal Tito would often emphasize that non-alignment with military and political blocs and pursuit of mediation policy in settling international conflicts were the only ways for his country to defend its interests on the international scene while maintaining independence in the conditions of a global confrontation between two social and political systems. The policy of present-day Serbian authorities, including on how to build relations with the European Union and NATO, fits in with that of Tito, which many Serbs recall with nostalgia.

Finally, Aleksandar Vučić is strongly committed to the development of a strategic partnership with Russia. At present, he is the most pro-Russian politician in the Balkans (along with the Serb member of the collective Presidency of Bosnia and Herzegovina Milorad Dodik, whose authority is fairly limited). The Serbian president has no intention of departing from such a policy in the future, even under pressure from Brussels and Washington.

«We are on the way to the European Union. Serbia is neutral in terms of military blocs. But Serbia, unlike some other countries also oriented at Europe, will not sever its ties and boasts excellent relations with China and Russia. We will not introduce sanctions either against China, or against Russia, full stop», - the Chinese “Guancha” cites Aleksandar Vučić as saying. [2]

«Serbia is a European nation, which is conducting talks on EU membership. However, it remains one of the few Balkan states that did not enter NATO (the alliance bombed it 20 years ago) and that maintains friendly relations with Russia and China», - Spain’s El Pais confirms. [3]

According to reports, Aleksandar Vučić is ready to meet some of the conditions which are put forward by the West if Serbia wants to become a member of the European Union. The two conditions include normalization of relations with Kosovo and joining the anti-Russian sanctions. Aleksandar Vučić is prepared to make concessions on the issue of Kosovo but not on building relations with Russia. This makes him yet more popular among the Serbs, the more so since unlike him, leaders of the motley Serbian opposition are incapable of substantiating their pro-Russian statements and many are ready to turn West if the chance presents itself.