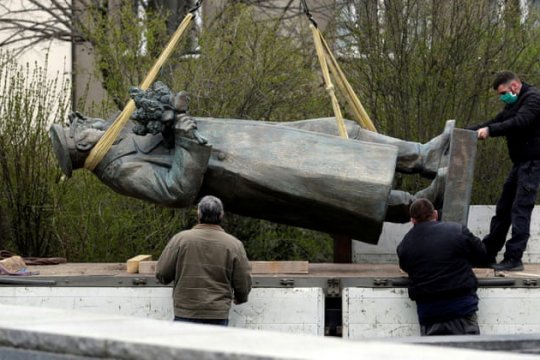 Racism, nationalism, or chauvinism are nothing new and may manifst themselves in different ways. The current anti-Russian campaigns against World War Two memorials could be described as racist.

All these campaigns testify to low-level education. At times, hatred towards other nations is all but a means to hide inferiority complex. In addition, new governments are set on re-writing history, of course, in their own favor. Naturally, this is done to conceal inferiority complex while those who do it are no other but servants hoping to get a higher pay from their new masters.

The first example of such attitude is the Monument to Russian Tank Crews in the Smichov District of Prague, the once capital of Czechoslovakia. The Monument was painted pink and dubbed the Pink Tank.

For years the Pink Tank, which stood in Smichov, commemmorated the liberation of Prague by the Red Army. In 1991 David Cerny (then a student of the High School of Applied Arts) decided to paint the monument pink. At that time, it became known that that particular tank had not participated in the liberation.

After the Soviet tanks invaded Czechoslovakia in 1968 the memorial tank in Smichov, which had been erected to remind Czechs about Red Army soldiers who died liberating their country of the Nazis, began to be seen as a symbol of the 1968 military campaign. In January 1991  historian Pavel Bjelina announced that „there were neither historical nor moral reasons for keeing the Smichov tank“. In April 1991 David Cerny, who was still a student, painted it pink and provided it with an „element of cerative decor“ in the form of a middle finger which was placed in an upright position behind the tank’s turret.

The campaign had both supporters and opponents. Three days later the city administration had the tank painted green again. However, fifteen deputies of the Federal Assembly from the Civil Forum, using their immunity status, ordered to paint it back into pink again. The object of discord was eventually deprived of national memorial status and on June 13, 1991, during a city renovation campaign, it was removed from the square altogether. In 1995 this caterpillar-drive tank joined the exhibits of the Lesana  Military Museum, which is located 30 kilometers from Prague.  Some of those who witnessed its color transformations find the entire matter funny describing the tank as a chameleon, changing color, from green to pink. But isn’t it enough to measure the degree of public sentiment?

The war against war memorials has a second “apple of discord” – a Monument to Soviet Marshal Ivan Konev, who commanded the final strategic operation of the Red Army in the course of which the Soviet forces destroyed the German army group “Centre” and part of the “South” group liberating Czechoslovakia and its capital  Prague from the Nazis. At the initial stage of the Prague rebellion (5-8 of May) the rebellious residents of Prague were joined by units of the First Infantry Division of the Russian Liberation Army commanded by Major-General Sergei Bunyachenko. The units later left the city at the request of the Czech National Council.

The decision on the death penalty for Vlasov and other traitors was passed by Politbureau of the Central Committee of the Communist Party on July 23rd 1946. A closed-door court hearing on the case of Vlasov and his assoociates took place from  30 to 31 of July 1946. All of them were found guilty of state treason, were deprived of military rank on decision of the Military Panel of the Supreme Court of the USSR and were executed on August 1, 1946. Their property was confiscated.

Back to the Monument to Marshal Konev, it was unveiled in a solemn ceremony in Bubenec District on Interbrigad Square in Prague 6 next to Yugoslav Partisan Street on May 9, 1980 in commemoration of the marshal’s services and of forces of the First Ukrainian Front of the Red Army that saved Prague from destruction by the Nazis. The monument was created with the participation of sculptors Zdenec Krybus, who designed the statue, and Wratislaw Ruzicska, who created the monument.

The monument has been vandalized many times, the last such case occurred in Augut 2019, on the 51st anniversary of the introduction of Warsaw Treaty troops to Czechoslovakia. Unidentified individuals poured red paint on the monument and wrote on the memorial plaque: «No to bloody marshal! We will not forget the  figures  «45, 56, 61, 68». Praha 6 Mayor Ondrzej Kolar refused to allocate funds to clean the  monument, saying: «Clearly, it is August. Konev is red again, as evey year. We have spent hundreds of thousands of krones from Praha 6 budget in the past few years on the clean-up and renovation of the monument. We will speak to Russian representatives again and we will propose relocating the monument to stand on the territory of the Russian Embassy. The parties did not come to agreement».

Not long ago the monument was removed and sent into depositary from where it will then be transferred to become part of the exposition of the Museum of the 20th Century, Ondrzej Sramek of Praha 6 City Council said.

The Council’s representative said that the decision to remove the monument from Interbrigad Square was passed in September 2019 but was postponed because of organizational issues. There were no reports as to the exact date of the removal. The city is currently under quarantine in connection with the coronavirus pandemic. This gives us grounds to assume that the quarantine presented a good opportunity to pull down the monument since there could be no protests. Such a behavior is childish, to say the least. When kids steal toys from other kids in a kindergarten they sometimes hide in the toilet. In this case, they hid behind the quarantine.

Praha 6 Mayor Ondrzej Kolar spoke about the removal with irony. "He was not wearing a mask. The rules must be  observed by everyone – you can go out into the street only if you have a mask on that covers your mouth and  nose".

In September 2019 the local council ruled that in place of the demolished monument there will be a memorial in  honor of  liberation of Prague in 1945, but it is unclear what the memorial will look like.

Presidential press secretary Jiri Ovcacek has condemned the  demolition of the monument.

"In a time of crisis they [the municipal authorities] set on covering our country with disgrace. Prague removes a monument to Marshal Konev – liberator of Auschwitz and Czechoslovakia from the Nazi invaders", - the press secretary to President Milos Zeman said.

«The  measure carried out by Praha 6 mayor Kolar – a secret unauthorized removal of the  statue of Marshal Konev under the  cover of the state of emergency in  connection with coronavirus – is a cheeky and cowardly act of unprecedented scope», - former President of the Czech Republic Wazlaw Klaus said.

Leaders of  the Communist Party of Czechoslovakia (KSČM) went further than  Zeman, who blamed Praha 6 City Council and  mayor for performing «cruel and  immoral acts». The Communists described this as re-writing history and  a spit «in the face of those who gave their lives for our freedom today". KSCM leadership has urged residents to wear red coats in protest against the removal of the  statue. The  government has demanded that the conflict should be settled immediately and  the monument to Marshal Konev be reinstated.

What makes the  problems over the  two memorials similar is an attempt to link them to the events of 1968. These problems cannot be settled through blatant statements about a mask or acts of vandalism. It appears that the best solution would be to convene historians from  the Russian Federation and  Czechoslovakia to produce a realistic estimate of those  events, publish a book and  once and  for all, close the books on the issue of 1968. So that this issue would not become a «scapegoat» in bilateral relations.