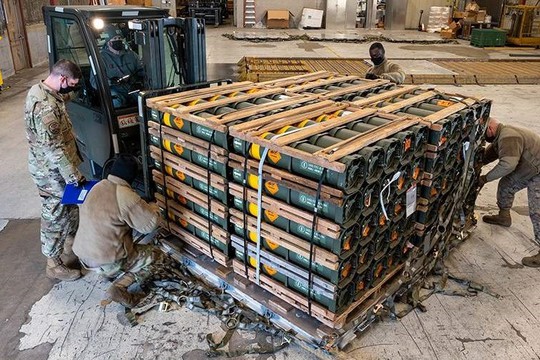 ‘In Washington, closed-door talks have begun about pulling Cold War-era     munitions out of bunkers and upgrading them enough to be useful to Kyiv,’ writes POLITICO.

"The war in Ukraine is at a critical point right now, and we have to do everything we can to help the Ukrainians…," Laura Cooper, deputy assistant secretary of defense for Russia, Ukraine and Eurasia, said during a Pentagon briefing.

The authorization of presidential drawdown of equipment from U.S. inventories is valued at up to $2.85 billion and there is an additional $225 million in foreign military financing to contribute to the long-term capacity and modernization of Ukraine's military, Cooper said. The major announcement was the inclusion of 50 M2-A2 Bradley Fighting Vehicles for the Ukrainian military.

"These capabilities will complement and work with the expanded U.S.- led training beginning this month that will build Ukraine's capacity to conduct joint maneuver and combined operations," Cooper said. "We will ensure Ukraine has both the equipment and the skill necessary to sustain its efforts..."

Now Ukraine needs armored vehicles and Germany, France, the Netherlands and the United States are sending them, - Cooper said. "In the case of the Bradley, what you are seeing is a recognition that this is the right time for us to provide this armored capability," she said. The aim is - to “change the dynamic on the battlefield." Moreover, she unwittingly expressed the assumptions  in Washington that Russia would win. - if Putin were to be successful in achieving his objective of taking over Ukraine.

At this briefing, figures and volumes of arms deliveries were heard. however, the representative of the State Department did not disclose that the allocated amounts would go not to Kyiv, but to the American military-industrial complex…

The United States supply old weapons from warehouses to Ukraine enriching its military complex at the same time. All talk about ‘peace in Europe’ is  bluff and deceit, what, however, the world is accustomed to. Putin accurately and correctly called the US the ‘Empire of lies’.