War chemicals as a propaganda weapon 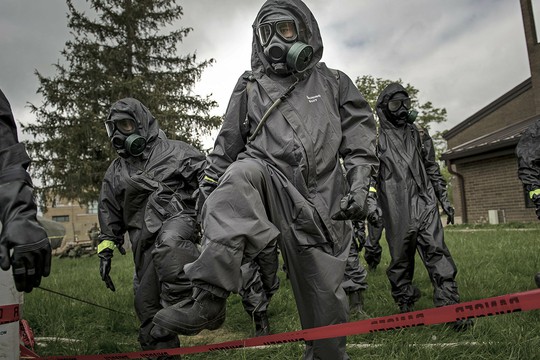 Chemical weapons were first used on the battlefield in 1915, but were banned after the First World War. There were many reasons for this. First, the armies had learned to defend against war chemicals. Secondly, the warring side that used them also suffered from their effect. Thirdly, new types of toxic substances were getting more and more dangerous. Luckily, there was no mention of any mass-scale use of poisonous substances  during the Second World War. Their development continued unabated though, and these days, chemical weapons, along with biological weapons, potentially pose a colossal threat! Indeed, just a few grams of war chemicals are enough to poison the water supply system of an entire city. A few liters of such chemicals sprayed over a peaceful city are enough to kill and cripple tens of thousands of people. Even terrorists, with rare exceptions, prefer explosives. War chemicals can kill one’s own, and their use will inevitably invite a severe crackdown by law enforcement agencies.

That being said, war chemicals have long been a weapon of propaganda. During World War II, the Allies threatened Nazi Germany with chemical attacks on major cities should Hitler become the first to use chemical weapons. This tactic worked, but the Germans still continued their experiments with chemical warfare agents. After 1945, the leading powers finally agreed to scrap their chemical and bacteriological arsenals. This did not prevent them from continuing their development for "experimental purposes" though. At the same time, the “use of poisonous substances” has become a real chiller-diller, used as a pretext for imposing sanctions, invasions and preventive strikes. Suffice it to mention the case of Iraq, where they spent a long time searching for that country’s chemical weapons only to find none. This did not prevent the Americans from invading the Arab country though.

It could seem that the densely populated Donbass is the last place in the world where one can try to covertly use chemical weapons. The line of disengagement, which has become the focus of increased tension between the self-proclaimed pro-Russian Donetsk and Lugansk People’s Republics and the Ukrainian army, is being watched very closely by international observers and journalists alike. However, according to the information recently carried by https://t.me/XMAPA_COM, the Ukrainian company Motor Sich was discussing with Turkey the modernization of the Bayraktar drones, including the installation of a 20-liter tank for spraying aerosols. No such tank is provided for by the manufacturer, but why is Ukraine so keen on this? Well, perhaps it is mulling an independent modernization of the UAV by Motor Sich company...

Since no one is talking here about fertilizing the fields, the question arises whether Kiev is really ready to use chemical weapons. At first glance, this seems unthinkable, but on closer inspection, the fact of the use of chemical weapons, confirmed by Western experts is exactly what Zelensky needs. All types of chemical weapons are outlawed! Any officially confirmed use of war chemicals over Ukrainian positions will be blamed on Russia. Moreover, in the information war, which is going on now, no evidence is required. True, even Hitler did not poison his own soldiers with chemical weapons, but there is always the first time.

However, does the Ukrainian military need to modernize Bayraktars at all? After all, all they would need to do is to simply report the use of something poisonous by pro-Russian militias and show some fake victims to the Western media. Since Russia has already been declared the culprit, what else do you need?